California earthquakes: 100 aftershocks rattle US state – and bring Disneyland to a standstill

An earthquake in Calfornia shook residents and brought rides in Disneyland to a standstill as more than 100 aftershocks rattled the US state over the weekend. 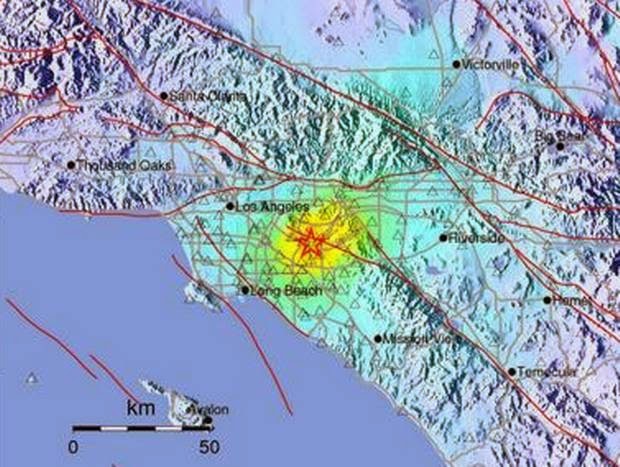 Residents of southern California were rattled by a 4.1 magnitude earthquake yesterday afternoon, the largest of scores of tremors following Friday's 5.1 rumbler that caused light scattered damage around the Los Angeles area.

Saturday's quake rippled through an area near Rowland Heights, California, according to the U.S. Geological Survey. The temblor was considered relatively shallow with a depth of 5.6 miles, the USGS said.

Aftershocks are expected following earthquakes, according to the USGS. Seismologists said there was about a 5 percent chance that Friday's quake, which struck at 9:09pm local time was a foreshock to a bigger quake.

No injuries were immediately reported from either Saturday's quake or the more significant earthquake that struck Friday evening outside La Habra, California, which is about 20 miles (32 km) east of downtown Los Angeles.

Friday's temblor displaced at least 50 people in Fullerton, about 5 miles (8 km) from the epicenter, because of minor damage to homes and apartment dwellings, Fullerton Police Lieutenant Mike Chlebowski said.

As well, a water main break in the city forced the closure of some streets due to flooding, he said. The quake also shook items off tables, rattled chandeliers and resulted in scattered damage to cars and property, including setting off a rockslide in the Orange County city of Brea that flipped a car on its roof.

While not large, the event “seems unusual, of course, because a lot of people felt it,” said Doug Given, a USGS geophysicist.

“These quakes occur in populated areas and people try to put two and two together and predict that something more is coming, but that's simply not the case,” he said.

The quake shut down Metrolink trains to allow for inspection of tracks and cars. In Anaheim, Disneyland briefly turned off park rides as a precaution and asked guests to remain seated.


“The L.A. Philharmonic should get combat pay,” audience member Michael Healy told the newspaper.
Posted by seemorerocks at 15:10