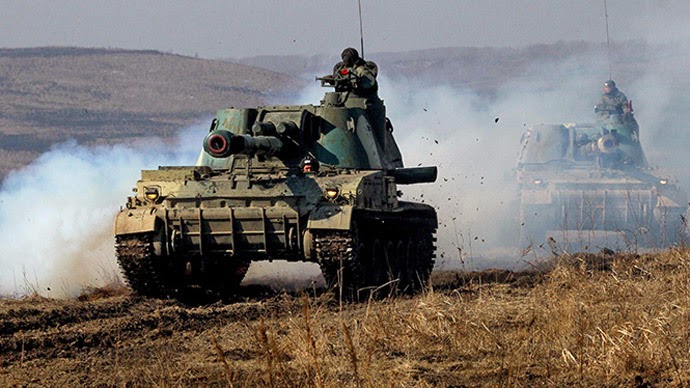 
On Friday Obama urged Russia to pull back “a range of troops,” which he said, “we have seen […] massing along that border under the guise of military exercises."

"But these are not what Russia would normally be doing," Obama said, speaking with CBS on his trip to Rome.

He then suggested that the troop build-up could be “just an effort to intimidate Ukraine.”

"It may be that they've got additional plans," Obama said.

The US president’s comments came the day after a Ukrainian security official told Executive Vice President of the US-Atlantic Council Damon Wilson that “almost 100,000 soldiers are stationed on the borders of Ukraine and in the direction ... of Kharkov, Donetsk.”

"Russian troops are not only in Crimea, they are along all Ukrainian borders. They're in the south, they're in the east and in the north," Andrey Parubiy, one of the so-called Maidan “commandants” who has been appointed chairman of Ukraine's Security Council, told the Atlantic Council during a web conference Thursday.

Parubiy expressed his worry that continental Ukraine might “see a huge attack” on its territory.

“We are getting ready for it," he said.

In the past few days, Western media has extensively reported that Russia is positioning its troops in Crimea and along the Ukrainian border. Some of the major news outlets speculated that Russian troops“appeared to be concealing their positions, trying to cloak their equipment, and establishing supply lines.”
Responding to those accusations, Russia’s Foreign Ministry issued a statement, in which it recalled four probes in March by foreign missions in Russia of regions bordering Ukraine.
The ministry said that “even Ukrainian inspectors” agreed that “there were no major military activities being carried out.”

The four international missions included representatives of Latvia, Germany, Switzerland, Finland, Estonia, Belgium, France and Ukraine. None of the missions “found ‘aggressive preparations’ and have not recorded any military activities, aside from the previously declared,” the statement said.

“Opportunities to conduct such activities were provided to all those who wished to get acquainted with the real situation in the border with Ukraine regions,” the ministry said.

The statement emphasized that “even Ukrainian inspectors” agreed that “there were no major military activities being carried out.”

“The result of this was the official reports submitted to all OSCE member states. The objective information contained in those reports, in our view, should have become a subject of an impartial analysis and basis for further conclusions,” the statement said.

This, however, is not the case here, the ministry said.
As another proof that there are no additional Russian troops and active military preparations, the Foreign Ministry referred to recent observation flights by American and German inspectors.

“The official results of those flights will be known later, after the processing of photographic materials. However, one can assume that if signs of large concentration of the armed forces were spotted from the air, our partners would not wait to present the ‘evidence’. Hence, it simply does not exist,” the ministry said.

Russia’s Foreign Ministry also questioned the objectivity of Western politicians.
"Is objective information collected by military inspectors not provided to the political leadership [of Western countries]? Or are these leaders, yielding to their emotions, inclined to ignore the facts in order to satisfy their own political tastes and preferences?" the ministry said.