It's not Putin who's on another planet! The west doesn't let up on its anti- Russian diatribe 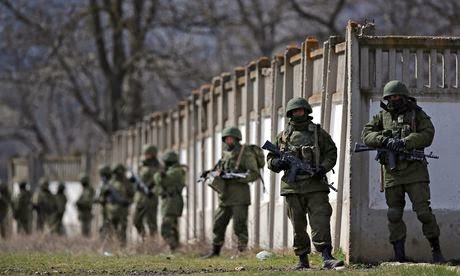 Russian president Vladimir Putin called Barack Obama on Friday to discuss a US diplomatic proposal for Ukraine and the US president told Putin that Russia must pull back its troops and not move deeper into Ukraine, the White House said.

It was believed to have been the first direct conversation between Obama and Putin since the US and its European allies began imposing sanctions on Putin's inner circle and threatened to penalise key sectors of Russia's economy.

Russia's reinforcement of troops near Ukraine has brought the total forces there to as many as 40,000, US officials estimated on Friday in a buildup that has increasingly worried Washington in recent days.

The White House noted specifically that it was Putin who called Obama, who is ending a four-nation trip in Saudi Arabia and had just returned to his Riyadh hotel after talks with King Abdullah.

Putin called to discuss a US proposal for a diplomatic resolution to the Ukraine crisis, which the US secretary of state, John Kerry, again presented to Russian foreign minister, Sergei Lavrov, at a meeting at The Hague earlier this week.

The US has been pressing Russia to pull back its troops to their Crimean bases and agree to talks with the Ukrainian government with international mediation. International monitors would go into Ukraine to assure that the ethnic Russian minority there is safe.

"President Obama suggested that Russia put a concrete response in writing and the presidents agreed that Kerry and Lavrov would meet to discuss next steps," the White House said.

A senior Obama administration official described the call as "frank and direct" and said the next step is the Kerry-Lavrov follow-up discussions to see whether the Russians are serious about diplomacy.

Obama and European leaders this week piled pressure on Russia to de-escalate the Ukraine crisis in a peaceful way. In a speech on Wednesday in Brussels, Obama built his case for sanctions against parts of the Russian economy like the energy industry, and said Nato would bolster its presence in alliance member nations close to Russia.

The White House said Obama stressed to Putin that the US continues to support a diplomatic path in close consultation with the Ukrainian government.

"President Obama made clear that this remains possible only if Russia pulls back its troops and does not take any steps to further violate Ukraine's territorial integrity and sovereignty," the White House said.

The Russian deployments on the border with Ukraine include the establishment of supply lines and the fielding of a wide range of military forces, US officials said.

These include militia or special forces units made up of Russian fighters wearing uniforms lacking insignia or other identifying markings, similar to the first Russian forces to move into Crimea during Russia's recent military takeover there, according to US and European sources familiar with official reporting.


Will Putin Go Further Into Ukraine? If He Does...


We discuss the latest on the growing conflict between Russia and Ukraine. More and more troops are building along the Ukraine border as President Obama warns them to ease back. Will Putin will go into Estonia and escalate this conflict to a war? John Iadarola (host, TYT University and Common Room), Ben Mankiewicz (co-host, What The Flick?! and TYT Sports), Wes Clark Jr, and Cenk Uygur break it down on The Young Turks.


Russia's buildup near Ukraine may reach 40,000 troops: U.S. sourcesz
Russia's reinforcement of troops near Ukraine has brought the total forces there to as many as 40,000, U.S. officials estimated on Friday, as the United States voiced anxiety over the buildup and called on Moscow to pull back its military.

The U.S. estimates of as many as 35,000 to around 40,000 troops are higher than the more than 30,000 total deployments reported earlier this week by U.S. and European sources familiar with official reporting.

Some European sources remain cautious of increasing the estimates beyond 30,000.

The military buildup is adding to concerns that Russia may again be readying an incursion into Ukraine following its annexation of Crimea, which has triggered the worst stand-off with the West since the Cold War.

"The possibility of another Russian incursion is very real," a U.S. intelligence official said, echoing increasingly ominous statements by other Obama administration officials.

The Russian deployments included the establishment of supply lines and the fielding of a wide range of military forces, U.S. officials say, speaking on condition of anonymity.

These include militia or special forces units made up of Russian fighters wearing uniforms lacking insignia or other identifying markings, similar to the first Russian forces to move into Crimea during Russia's recent military takeover there, according to U.S. and European sources familiar with official reporting.

The Pentagon has said there was no indication that the forces were carrying out the kind of springtime military exercises Moscow has officially cited as the reason for their deployment.

U.S. President Barack Obama on Friday described the buildup as out of the ordinary.

"You've seen a range of troops massing along that border under the guise of military exercises," he said on CBS "This Morning" in Vatican City. "But these are not what Russia would normally be doing."

Obama said the moves might be no more than an effort to intimidate Ukraine, but could be a precursor to other actions.

"It may be that they've got additional plans," he said in excerpts from an interview with CBS "Evening News," to be broadcast in full on Friday night.

Ukraine's government has put its heavily outnumbered and outgunned forces on alert for an invasion from Russia in the east, following Moscow's takeover of Crimea, as the West moves to isolate Russia diplomatically and pressure it economically.

Ukraine's estimates of Russian forces near the border are far higher than Western figures, with Ukrainian security chief Andriy Parubiy citing nearly 100,000 troops on Thursday, via webcast from Kiev to a U.S. think tank. His comments can be seen here: here

Exactly what Russian President Vladimir Putin plans to do with his forces on the Ukraine border is not known, U.S. officials said.

Some officials say intelligence information available to policymakers regarding what Putin is thinking, and what he is saying to his advisers and military commanders, is fragmentary to non-existent.

Putin has reserved the right to send troops into Ukraine, the eastern part of which is home to a large population of Russian-speakers. On Friday, he said Russia's takeover of Crimea showed off its military prowess.

"The recent events in Crimea were a serious test," Putin was shown saying on state television.

"They demonstrated both the completely new capabilities of our Armed Forces and the high morale of the personnel."