Overnight search efforts in Snohomish County will be scaled back in dangerous debris areas, but over 200 searchers will resume the search at daylight Wednesday. The official death toll has risen to 16 and eight more bodies have been located.


Buried town was warned of risk
The town in Washington state buried by a monster mudslide that has claimed up to 24 lives so far was warned of the risk four years ago. 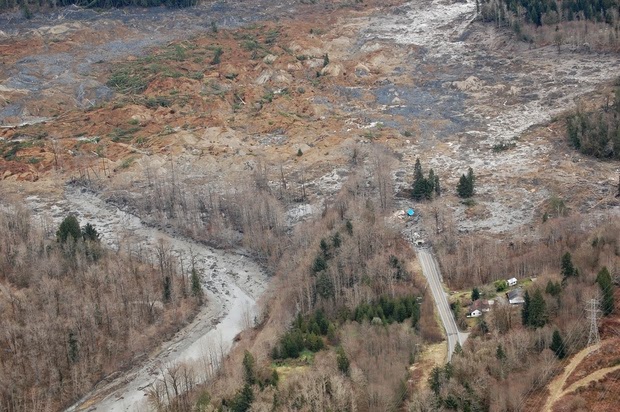 The landslip on Saturday destroyed dozens of houses in Oso, north-east of Seattle. More than 150 people remain unaccounted for.

A report commissioned in 2010 after a major slip in 2006 pinpointed the hillside overlooking the town as among the most dangerous in terms of possible collapse; but new home construction continued to be allowed.

A geological study in 1999 also warned of the potential for a catastrophic failure in the area.

However, officials say the community was aware of the dangers.

"(But) this wasn't a small event. It was large, it was very catastrophic," he added.
A 54m wall of mud buried the town of Oso, north of Seattle, on Saturday.

"We haven't lost hope that there's a possibility that we could find somebody alive," fire chief Travis Hots told reporters on Tuesday night.

"We are coming to the realisation that that may not be a possibility - but we are going full steam ahead.

"We are going at this hard to get everybody that's out there that's missing."

The catastrophe on Saturday destroyed 49 houses, when a mudslide suddenly dammed a river and left a square-mile field of muck and debris in its wake. Part of a highway was also destroyed some 95km northeast of Seattle.

Survivors were last pulled alive from the mud on Saturday.

The operation was further complicated on Tuesday by heavy rain, as the workers were forced to contend with slippery mud, upturned nails, wreckage, and deep pits of water, Mr Hots said.

President Barack Obama has declared a state of emergency for Washington state.