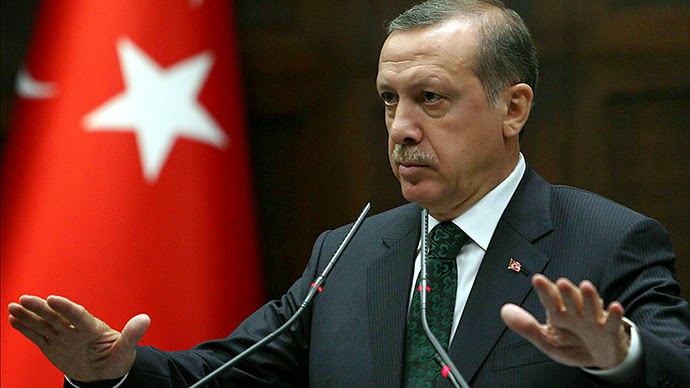 “I'll make up a cause of war by ordering a missile attack on Turkey.” This leaked conversation is coming back to haunt the highest echelons of the Turkish government as it plans a provocation in Syria, while scrambling to contain social media internally.

The leaked audiotapes that reveal Turkey’s highest ministers staging an anti-Assad military intervention in Syria, have already caused YouTube to be shut down in the country, as well as leading to fevered accusations of treachery and betrayal of Turkey’s political interests – “a declaration of war,” as Turkish Foreign Minister Ahmet Davutoğlu put it.
This is of course after intelligence chief Hakan Fidan suggested seizing the opportunity to secure Turkish intervention in the Syrian conflict - a war that has already claimed 140,000 lives, and counting. In the conversation, Davutoğlu is heard saying that Prime Minister Recep Tayyip Erdoğan sees any attack as an "opportunity" to increase troop presence in Syria, where it has staunchly supported the anti-Assad rebels.
Below is a transcript of that conversation in full. The video can be found below.
Ahmet Davutoğlu:  "Prime Minister said that in current conjuncture, this attack (on Suleiman Shah Tomb) must be seen as an opportunity for us."
Hakan Fidan:  "I'll send 4 men from Syria, if that's what it takes. I'll make up a cause of war by ordering a missile attack on Turkey; we can also prepare an attack on Suleiman Shah Tomb if necessary."

Hakan Fidan:  “I’ll send 4 men from Syria, if that’s what it takes. I’ll make up a cause of war by ordering a missile attack on Turkey

Ahmet Davutoğlu: I couldn't entirely understand the other thing; what exactly does our foreign ministry supposed to do? No, I'm not talking about the thing. There are other things we're supposed to do. If we decide on this, we are to notify the United Nations, the Istanbul Consulate of the Syrian regime, right?
Feridun Sinirlioğlu: But if we decide on an operation in there, it should create a shocking effect. I mean, if we are going to do so. I don't know what we're going to do, but regardless of what we decide, I don't think it'd be appropriate to notify anyone beforehand.

Feridun Sinirlioğlu: But if we decide on an operation in there, it should create a shocking effect. I  mean, if we are going to do so. I don’t know what we’re going to do, but regardless of what we decide, I don’t think it’d be appropriate to notify anyone beforehand.

Ahmet Davutoğlu: OK, but we're gonna have to prepare somehow. To avoid any shorts on regarding international law. I just realised when I was talking to the president (Abdullah Gül), if the Turkish tanks go in there, it means we're in there in any case, right?
Yaşar Güler: It means we're in, yes.
Ahmet Davutoğlu: Yeah, but there's a difference between going in with aircraft and going in with tanks...
SECOND SCREEN:  Yaşar Güler: Maybe we can tell the Syrian consulate general that, ISIL is currently working alongside the regime, and that place is Turkish land. We should definitely...
Ahmet Davutoğlu: But we have already said that, sent them several diplomatic notes.
Yaşar Güler: To Syria...
Feridun Sinirlioğlu: That's right.
Ahmet Davutoğlu: Yes, we've sent them countless times. Therefore, I'd like to know what our Chief of Staff's expects from our ministry.
Yaşar Güler: Maybe his intent was to say that, I don't really know, he met with Mr. Fidan.
Hakan Fidan: Well, he did mention that part but we didn't go into any further details.
Yaşar Güler: Maybe that was what he meant... A diplomatic note to Syria?
Hakan Fidan: Maybe the Foreign Ministry is assigned with coordination... 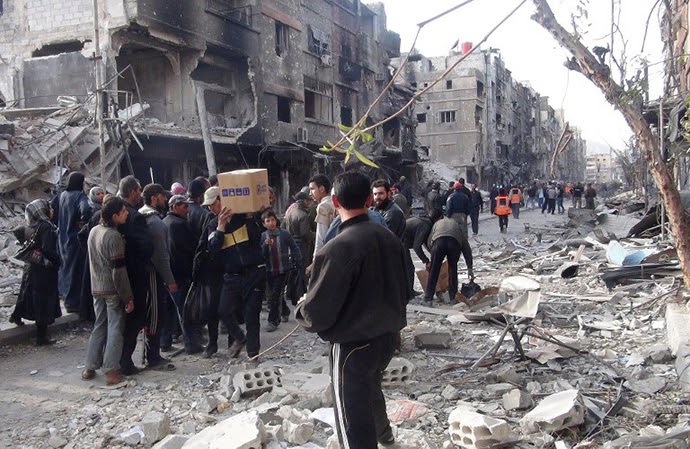 Ahmet Davutoğlu: I mean, I could coordinate the diplomacy but civil war, the military...
Feridun Sinirlioğlu: That's what I told back there. For one thing, the situation is different. An operation on ISIL has solid ground on international law. We're going to portray this is Al-Qaeda, there's no distress there if it's a matter regarding Al-Qaeda. And if it comes to defending Suleiman Shah Tomb, that's a matter of protecting our land.
Yaşar Güler: We don't have any problems with that.
Hakan Fidan: Second after it happens, it'll cause a great internal commotion (several bombing events is bound to happen within). The border is not under control...
Feridun Sinirlioğlu:I mean, yes, the bombings are of course going to happen. But I remember our talk from 3 years ago...
Yaşar Güler: Mr. Fidan should urgently receive back-up and we need to help him supply guns and ammo to rebels. We need to speak with the minister. Our Interior Minister, our Defense Minister. We need to talk about this and reach a resolution sir.
Ahmet Davutoğlu: How did we get special forces into action when there was a threat in Northern Iraq? We should have done so in there, too. We should have trained those men. We should have sent men. Anyway, we can't do that, we can only do what diplomacy...

Feridun Sinirlioğlu: I told you back then, for God's sake, General, you know how we managed to get those tanks in, you were there.
Yaşar Güler: What, you mean our stuff?
Feridun Sinirlioğlu: Yes, how do you think we've managed to rally our tanks into Iraq? How? How did we manage to get special forces, the battalions in? I was involved in that. Let me be clear, there was no government decision on that, we have managed that just with a single order.


Yaşar Güler: Well, I agree with you. For one thing, we're not even discussing that. But there are different things that Syria can do right now.
Ahmet Davutoğlu: General, the reason we're saying no to this operation is because we know about the capacity of those men.
Yaşar Güler: Look, sir, isn't MKE (Mechanical and Chemical Industry Corporation) at minister's bidding? Sir, I mean, Qatar is looking for ammo to buy in cash. Ready cash. So, why don't they just get it done? It's at Mr. Minister's command.
Ahmet Davutoğlu: But there's the spot we can't act integratedly, we can't coordinate.
Yaşar Güler: Then, our Prime Minister can summon both Mr. Defence Minister and Mr. Minister at the same time. Then he can directly talk to them.
Ahmet Davutoğlu: We, Mr. Siniroğlu and I, have literally begged Mr. Prime Minster for a private meeting, we said that things were not looking so bright. 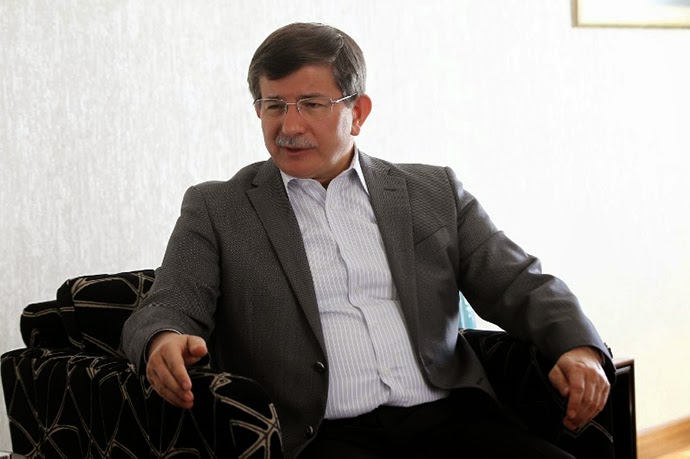 
Yaşar Güler: Also, it doesn't have to be a crowded meeting. Yourself, Mr. Defence Minister, Mr. Interior Minister and our Chief of Staff, the four of you are enough. There's no need for a crowd. Because, sir, the main need there is guns and ammo. Not even guns, mainly ammo. We've just talked about this, sir. Let's say we're building an army down there, 1000 strong. If we get them into that war without previously storing a minimum of 6-months' worth of ammo, these men will return to us after two months.
Ahmet Davutoğlu: They're back already.
Yaşar Güler: They'll return to us, sir.
Ahmet Davutoğlu: They've came back from... What was it? Çobanbey.
Yaşar Güler: Yes, indeed, sir. This matter can't be just a burden on Mr. Fidan's shoulders as it is now. It's unacceptable. I mean, we can't understand this. Why?
SIXTH SCREEN:


Ahmet Davutoğlu: That evening we'd reached a resolution. And I thought that things were taking a turn for the good. Our...
Feridun Sinirlioğlu: We issued the MGK (National Security Council) resolution the day after. Then we talked with the general...
Ahmet Davutoğlu: And the other forces really do a good follow up on this weakness of ours. You say that you're going to capture this place, and that men being there constitutes a risk factor. You pull them back. You capture the place. You reinforce it and send in your troops again.
Yaşar Güler: Exactly, sir. You're absolutely right.
Ahmet Davutoğlu: Right? That's how I interpret it. But after the evacuation, this is not a military necessity. It's a whole other thing.


Feridun Siniroğlu: There are some serious shifts in global and regional geopolitics. It now can spread to other places. You said it yourself today, and others agreed... We're headed to a different game now. We should be able to see those. That ISIL and all that jazz, all those organisations are extremely open to manipulation. Having a region made up of organisations of similar nature will constitute a vital security risk for us. And when we first went into Northern Iraq, there was always the risk of PKK blowing up the place. If we thoroughly consider the risks and substantiate... As the general just said...
Yaşar Güler: Sir, when you were inside a moment ago, we were discussing just that. Openly. I mean, armed forces are a "tool" necessary for you in every turn.
Ahmet Davutoğlu: Of course. I always tell the Prime Minister, in your absence, the same thing in academic jargon, you can't stay in those lands without hard power. Without hard power, there can be no soft power. 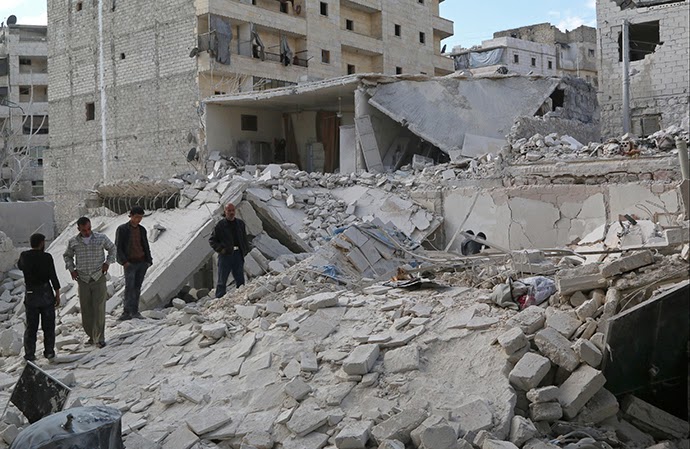 Yaşar Güler: Sir.
Feridun Sinirlioğlu: The national security has been politicised. I don't remember anything like this in Turkish political history. It has become a matter of domestic policy. All talks we've done on defending our lands, our border security, our sovereign lands in there, they've all become a common, cheap domestic policy outfit.
Yaşar Güler: Exactly.
Feridun Siniroğlu: That has never happened before. Unfortunately but...
Yaşar Güler: I mean, do even one of the opposition parties support you in such a high point of national security? Sir, is this a justifiable sense of national security?
Feridun Sinirlioğlu: I don't even remember such a period.
NINTH SCREEN:  Yaşar Güler: In what matter can we be unified, if not a matter of national security of such importance? None.
Ahmet Davutoğlu: The year 2012, we didn't do it 2011. If only we'd took serious action back then, even in the summer of 2012.
Feridun Sinirlioğlu: They were at their lowest back in 2012.
Ahmet Davutoğlu: Internally, they were just like Libya. Who comes in and goes from power is not of any importance to us. But some things...
Yaşar Güler: Sir, to avoid any confusion, our need in 2011 was guns and ammo. In 2012, 2013 and today also. We're in the exact same point. We absolutely need to find this and secure that place.
Ahmet Davutoğlu: Guns and ammo are not a big need for that place. Because we couldn't get the human factor in order...