The dollar under attack 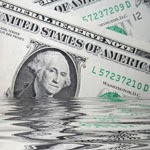 The word dollar didn’t even come up. “The volume of transactions that can be carried out in the Chinese currency in international and German financial centers is not commensurate with China’s importance in the global economy,” the Bundesbank explained in its dry manner on Friday in Berlin, after signing a memorandum of understanding with the People’s Bank of China. President Xi Jinping and Chancellor Angela Merkel were looking on. It was serious business. Everyone knew what this was about. No one had to say it.

The agreement spelled out how the two central banks would cooperate on the clearing and settlement of payments denominated in renminbi – to get away from the dollar’s hegemony as payments currency and as reserve currency.

This wasn’t an agreement between China and a paper-shuffling financial center like Luxembourg or London, which are working on similar deals, but between two of the world’s largest exporters with a bilateral trade of nearly $200 billion in 2013. German corporations have invested heavily in China over the last 15 years. And recently, Chinese corporations, many of them at least partially state-owned, have started plowing their new money into Germany.

This “renminbi clearing solution” – the actual mechanism, clearing bank or clearing house, hasn’t been decided yet – will be an important step for China to internationalize the renminbi and ditch its reliance on the dollar. It will be located in Frankfurt; that the city is “home to two central banks,” Bundesbank Executive Board Member Joachim Nagel pointed out, made it “a particularly suitable location.”

As a world payments currency, the renminbi is still minuscule but growing in leaps and bounds: in February, customer initiated and institutional payments, inbound and outbound, denominated in RMB accounted for only 1.42% of all traffic, but it set a new record, according to SWIFT, the NSA-infiltrated, member-owned cooperative that connects over 10,000 banks, corporations, the NSA, and other intelligence agencies around the world.

Despite China’s heft as the second largest economy, the yuan was only in eighth place as payments currency, behind the Swiss franc. The dollar and the euro have been duking it out over the top spot. In February, the dollar accounted for 38.9% and the euro for 33.0% of all payments traffic. January last year, for example, the euro was in first place with a share of 40.2%, while the dollar only came up with 33.5%. As China moves away from the dollar, its share as payments currency will continue to drop.

And Merkel, whose job it had been to keep the Eurozone together by tightening duct tape and bailing wire around the necks of other countries, hasn’t forgotten: “We’re very thankful that China made efforts during the euro crisis to consider the euro a stable currency,” she said at the press conference. “China never questioned its trust in the euro, and I find that very important....”

Setting up Frankfurt as an offshore renminbi trading center has been in the works since 2012. A steering committee was set up in July 2013 that included the Economics Ministry of the state of Hesse, the Federal Finance Ministry, and the Bundesbank. In October 2013, the “RMB Initiative Group” – which included the four Chinese banks with a presence in Frankfurt, German financial services giants, and the Bundesbank – met for the first time. The working group that deals with the establishment of the RMB clearing solution is headed by the Bundesbank and counts SWIFT among its members. German corporations and trade associations all support the initiative.

It was “a major step forward in intensifying Germany’s economic relations with China,” said Bundesbank Executive Board Member Carl-Ludwig Thiele.

A succinct definition of breaking the dollar’s hegemony as payments currency, investment currency, and reserve currency – China’s strategy since 2009.

At the time, the financial crisis in the US sent cold shivers down the spine of China’s government that until then had been sitting loosey-goosey on mountains of US paper that suddenly threatened to evaporate, such as Fannie Mae’s and Freddie Mac’s mortgage backed securities that China had somehow thought were worth something when in fact they were not – at least not until China applied enough pressure on the Bush Administration to guarantee them and on the Fed to buy them to inflate their value.

China got bailed out by the US taxpayer and the Fed, but the episode taught the government a lesson: dump the dollar. And so it went about it, carefully, systematically, step by step, but relentlessly, as Xinhua said, in a “multi-pronged” strategy that included making broad-ranging bilateral currency deals with one country at a time.

Compared to China, Russia is small fry in terms of trade and financial relations with the US. But it too has had it. The first official warning shot was fired before its all-out assault on the dollar system begins. Not by a Putin advisor that can be brushed off, but by Russia’s Minister of Economy and former Deputy Chairman of the Central Bank. A major escalation.
Posted by seemorerocks at 15:06