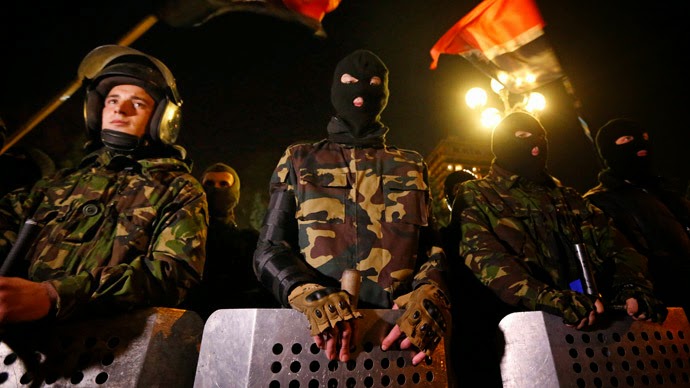 According to the source, the meeting was attended by the acting Interior Minister Arsen Avakov, National Security and Defense Council chief Andrey Parubiy, as well as Oleg Tyagnibok, the leader of nationalist Svoboda party.
During the meeting, Avakov suggested a complete ban of the organization given the radicalization of the Right Sector, the source said.
Parubiy was allegedly supportive of the idea of dismantling the neo-Nazi movement and said such a move would allow those present at the meeting to whitewash themselves of having any connections to the radicals, the source said. Tyagnibok reportedly did not take any sides.
According to the source, the proposal will be further discussed on Friday “within a wider circle.”
Meanwhile on Friday, Verkhovna Rada is also expected to hold an emergency session to discuss the possibility of Avakov’s resignation, after hundreds of Ukrainian nationalists gathered outside the parliament building threatening to storm it unless Avakov takes personal responsibility for the killing of one of their leaders and resigns.

The right-wing militant leader Muzychko, also known as Sashko Bilyi, was killed in a police raid against his gang in Rovno, western Ukraine. Police look at the body of Oleksander Muzychko, also known as Sashko Bily, lying on the ground near Rivne March 25, 2014. (Reuters / Olexandr Kursik)

The Interior Ministry plans in the next couple of days to unveil the audio files related to the attempted arrest and subsequent killing of Muzychko, Avakov said on his Facebook page on Friday.

“The Ministry of Internal Affairs will disclose all documents, material, video and audio evidence,” Interior Minister Arsen Avakov said, saying that within the next two days all the audio files relating to Tuesday's shootout will be declassified.

“This will give the public more information about the activities involved in the case. Everyone will be able to decide who is the hero and who vulgar bandit "Avakov said.

The Interior Minister also stressed that he holds human life in the highest regard, “and even seriously accused should not be deprived of their life.”

That is why, Avakov says, a pubic inquiry was launched into the death as “objective public information and public objective conclusions - the only sure way out.”

Dmitry Yarosh, leader of Ukraine's Right Sector nationalist party, is demanding the resignation of acting Interior Minister Arsen Avakov and the arrest of the police officers involved in the killing of notorious radical militant Aleksandr Muzychko.
Right Sector is a conglomerate of Ukrainian nationalist forces with neofascist views that has been organized into a paramilitary collective of over 10,000 strong. The group first emerged at the end of November 2013 at the Euromaidan protests in Kiev headed by Dmitry Yarosh. Right Sector fighters became notorious for using clubs, petrol bombs, and firearms against Ukrainian police and for wearing Nazi insignia.
Russia put Yarosh on an international wanted list and charged him with inciting terrorism after he urged Chechen terrorist leader Doku Umarov to launch attacks on Russia over the Ukrainian conflict. The ultra-nationalist leader has also threatened to destroy Russian pipelines on Ukrainian territory.

Posted by seemorerocks at 20:56