Asia Will Not "Isolate" Russia 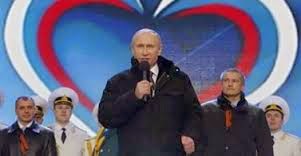 Any (bureaucratic) doubts the New Cold War is on have been dispelled by the Group of Seven issuing a pompous, self-described Hague Declaration. Abandon all hope those who expected The Hague to become the seat of a tribunal judging the war crimes of the Cheney regime.

The G-7 also canceled its upcoming summer summit in Sochi as a means of "punishing" Moscow over Crimea. As if this carried any practical value. Russian Foreign Minister Sergei Lavrov responded with class; if you don't want us, we have better things to do.[1] Everyone knows the G-7 is an innocuous, self-important talk shop. It's in the G-20 -- much more representative of the real world -- where crucial geopolitical and geoeconomic issues gain traction.

The Hague Declaration comes complete with the kiss of death, as in, "The International Monetary Fund has a central role leading the international effort to support Ukrainian reform, lessening Ukraine's economic vulnerabilities, and better integrating the country as a market economy in the multilateral system." That's code for "wait till structural adjustment starts biting."

And then there will be "measures to enhance trade and strengthen energy security" -- code for "we will destroy your industry" but "are not very keen on paying your humongous Gazprom bill."

All this in the sidelines of a supposed summit on nuclear security in the Netherlands, where US President Barack Obama, at the Rijksmuseum, in front of Rembrandt's The Night Watch, extolled Washington's "support of the Ukrainian government and Ukrainian people." Rembrandt's watchers have never seen anything like it in their glorious lifespan. It pays to be a Nazi after all; you just need to be in the right government, against the right enemy, and fully approved by the hyper-power.

King Willem-Alexander hosted a lavish dinner for the members of the nuclear security summit at the Royal Palace Huis ten Bosch in The Hague -- after Obama met with Chinese President Xi Jinping in a (failed) bid to "isolate" Russia. The White House would later add that, as long as Russia continues "flagrantly" to violate international law, "there is no need for it to engage with the G7." Unless, of course, it starts conducting a drone war in Ukrainian badlands -- with kill-list attached.

The US Senate -- always enjoying superb popularity ratings -- laboriously laid the groundwork for debating a bill backing a US$1 billion loan guarantee for the regime changers in Kiev, plus $150 million in aid also including "neighboring countries." These figures are enough to pay Ukraine's bills for maybe two weeks.

Meanwhile, in the facts on the ground department, Crimea will be booming soon -- tourism included -- and may even become a "special economic zone."[2] Subjects of the upcoming IMF/agribusiness-plundered Khaganate of Nulands will see the results for themselves.

Hysteria within the North Atlantic Treaty Organization that Russia is about to invade everyone and his neighbor literally tomorrow -- remember The Russians Are Coming! -- persists unabated. Independent observers, The Roving Eye included, always insisted this is all about NATO, and not the European Union.[3]

Since the go-go days of the Bill Clinton era, NATO has been expanding to the doorstep of Russia. The process graphically represents US hegemony over Europe; NATO "annexed" Eastern Europe even before the EU. And even those certified US Cold Warriors such as Paul Nitze always thought this was a needless, dangerous provocation of Russia.

Very few remember how "Bubba" Clinton, to make sure terminal alcoholic Boris Yeltsin was re-elected in 1996, postponed NATO's expansion for a year. Afterwards, the expansion turbocharged into NATO as global Robocop -- from the Balkans to the intersection of Central and South Asia, and to Northern Africa.

NATO's humanitarian bombing of Yugoslavia -- 36,000 combat missions, 23,000 bombs and missiles -- whose 15th anniversary is "celebrated" this week, codified the new realities. NATO had nothing to do with defense; it was a multi-lethal (transformer) attack dog. It was the epitome of clean war; aerial blitzkrieg, and no casualties. And it was totally legitimized by "human rights" over national sovereignty; that was humanitarian imperialism in the making, opening the way to "responsibility to protect" and the destruction of Libya.

Moscow knows very well the lineaments of the neo-barbarian behemoth at its gates, in the form of NATO bases in Ukraine, assuming the regime changers in Kiev remain in power. And their response has absolutely nothing to do with "Putin's aggression." Or the so-called "Medvedev Doctrine" of Russia theoretically extending military protection to Russians everywhere. As if Russia was about to "threaten" its business interests in Kazakhstan, Kyrgyzstan, Turkmenistan, Tajikistan or Mongolia.

What the White House calls "the international community" -- roughly the "Hague Declaration" G-7 plus a few European minions -- could not possibly admit that. Asia, on the other hand, clearly identifies it. China, Japan and South Korea, for starters, identify Russia with a steady supply of oil and gas and further business deals. Even considering that Japan and South Korea are essentially US protectorates, nothing could be more anachronistic in their calculations than a Western-provoked New Cold War.

Asia will not "isolate" Russia -- and Asians and Russians know it, as much as The White House is in denial. Beijing's abstention in "condemning" Moscow -- talk about the American angry-schoolmaster brand of politics -- is classic Deng Xiaoping-style "keep a low profile," as China is Russia's strategic partner and both are busy working for the emergence of a multipolar world. Not to mention Beijing's utmost rejection of US-style color-coded "revolutions" and regime change ops -- as well as that "pivoting to Asia" encirclement ops.

Oh, to have been an EU-regulated fly on the wall in that Hague room where Obama and Xi were talking; cool Xi meets Obama pivoting around himself.