New study shows major increase in West Antarctic glacial loss
Six massive glaciers in West Antarctica are moving faster than they did 40 years ago, causing more ice to discharge into the ocean and global sea level to rise, according to new research 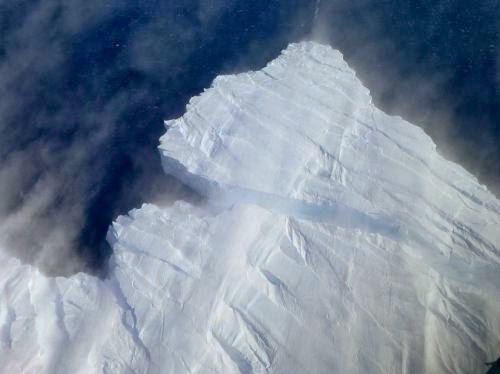 The amount of ice draining collectively from those half-dozen glaciers increased by 77 percent from 1973 to 2013, scientists report this month in Geophysical Research Letters, a journal of the American Geophysical Union. Pine Island Glacier, the most active of the studied glaciers, has accelerated by 75 percent in 40 years, according to the paper. Thwaites Glacier, the widest glacier, started to accelerate in 2006, following a decade of stability.

The study is the first to look at the ice coming off the six most active West Antarctic glaciers over such an extended time period, said Jeremie Mouginot, a glaciologist at University of California-Irvine (UC-Irvine) who co-authored the paper. Almost 10 percent of the world's sea-level rise per year comes from just these six glaciers, he said.

"What we found was a sustained increase in ice discharge—which has a significant impact on sea level rise," he said.

The researchers studied the Pine Island, Thwaites, Haynes, Smith, Pope and Kohler glaciers, all of which discharge ice into a vast bay known as the Amundsen Sea Embayment in West Antarctica.

The amount of ice released by these six glaciers each year is comparable to the amount of ice draining from the entire Greenland Ice Sheet annually, Mouginot said. If melted completely, the glaciers' disappearance would raise sea levels another 1.2 meters (four feet), according to co-author and UC-Irvine Professor Eric Rignot.

The decades of increasing speeds and ice loss are "a strong indication of a major, long-term leakage of ice into the ocean from that sector of Antarctica," noted Rignot.

"This region is considered the potential leak point for Antarctica because of the low seabed. The only thing holding it in is the ice shelf," said Robert Thomas, a glaciologist at the NASA Wallops Flight Facility, in Wallops Island, Va., who was not involved in the study. Ice shelves are platforms of permanent floating ice that form where glaciers meet the sea. In West Antarctica, ice shelves prevent the glaciers investigated in the study from slipping more rapidly into the ocean.


Mouginot and his colleagues used satellite data to look at sequential images of the glaciers from 1973 to 2013. The scientists then calculated how fast the ice was moving by tracking surface features, such as cracks in the ice, to determine the distance the glaciers traveled from month to month and year to year.

While the study considered the six glaciers collectively, it also revealed unprecedented change on the individual glacier level. Thwaites Glacier, the largest of the six with a width of 120 kilometers (75 miles), experienced a decade of near-stability until 2006, when its speed picked up by 0.8 kilometers (half a mile) per year – a 33 percent increase in speed, according to the study. This is the first time that such changes on Thwaites Glacier have been observed, said Mouginot.

Both Pine Island and Thwaites glaciers contribute the most to overall ice discharge—about three-fourths of the total amount documented in the study. However, scientists also documented even higher rates of increased discharge in some of the smaller glaciers. Smith and Pope Glaciers nearly tripled the amount of ice they drained into the ocean since 1973.

The research team also found that the Pine Island Glacier is accelerating along its entire drainage system—up to 230 kilometers (155 miles) inland from where it meets the ocean.

"This paper is important in showing that a glacier can actually 'feel' what is happening far downstream of itself," said Thomas. "It means that if you disturb the ice sheet near the coast, the glaciers will feel the push and rapidly respond hundreds of kilometers inland."

This finding suggests that glacier acceleration models may need to be reevaluated, Thomas added. Most current models only take into account isolated speed changes resulting from a local disturbance, rather than representing how these changes affect the glacier as a whole.

Posted by seemorerocks at 16:23