“The Canadian government has already destroyed the scientific research archives on Fisheries. The Canadian Minister of Fisheries has ignored the advice of her own scientists and now they are opposing native communities all in the interest of supporting commercial fishing interests.

Gail Shea the Minister of Fisheries and Oceans is committing crimes against nature and humanity with her ignorance of ecological reality and her arrogance in wielding power unrestricted by reason or compassion.

The native communities of British Columbia are the only guardians left to defend the fish from greed and destruction and Harper's government is intent upon crushing their spirit and their opposition.” 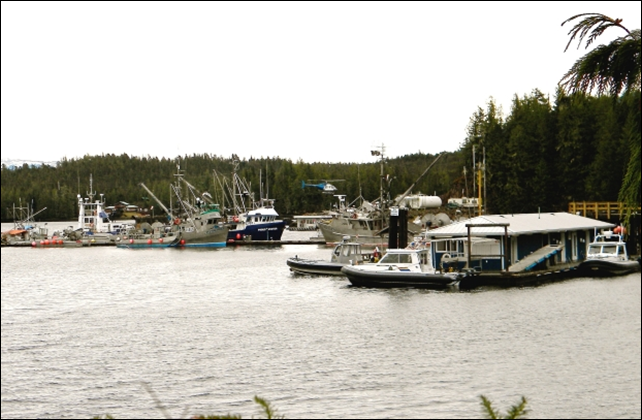 The federal government has chosen a remote stretch of B.C. coastline to square off against aboriginals in a fight over an imminent commercial roe-herring fishery.

Federal fisheries minister Gail Shea is being blamed for an escalating conflict over a forthcoming commercial gillnet fishery that has resulted in RCMP descending on B.C.’s central coast to guard against potential interference by Heiltsuk natives.

The Heiltsuk have issued a statement saying, “We will exercise our authority to stop any commercial herring activity in our territories. We will protect our aboriginal rights to the fullest extent possible should commercial fishers not abide by the ban.”

In an interview Thursday, Heiltsuk councillor Reg Moody said he appreciates that the police have a job to do and that no one wants to see anyone get hurt. But natives are also committed to protecting herring stocks in their traditional waters.

“It’s real,” he said of the prospect for confrontation. “If a gillnetter is going to put his net in the water, it’s gonna be easy for me to drop a tree in the water in its place. We could make it difficult ... put trees in the areas where they plan to fish.”

Moody placed the responsibility for events squarely on the minister’s shoulders. “Our position has always been that we’re not unreasonable, but there has to be some fundamental changes made. It could have been avoided. We could work collectively.”

Shea, a P.E.I. MP, declined The Vancouver Sun’s request for an interview.

Federal fisheries spokesman Tom Robbins insisted that “the herring fishery is a legitimate fishery backed by solid fisheries science” and aboriginals have been consulted.

“We stand strongly against violence on the water,” Robbins said. “The department is monitoring the situation and will take appropriate enforcement action if there are any Fisheries Act violations.”

There are 50 participants licensed to fish for roe in the central coast gillnet fishery, he added. Due to pooling up, only about 20 vessels, including punts and packers, are expected to participate.

Ian McAllister of the environmental group Pacific Wild estimated more than 20 RCMP and up to six patrol vessels are now based in Shearwater on Denny Island near Bella Bella. “If you add up the daily police presence, overtime, boat fuel, planes going back and forth, it’s just ridiculous.”

RCMP Cpl. Dave Tireman would not confirm how many police are in the Bella Bella due to “operational reasons,” but noted police are there to keep the peace.

“We’re sitting in the back row of the bus,” he said. “We have to remain neutral. We’re there to make sure everything is safe and everything is peaceful.”

The Nuu-chah-nulth obtained a federal court injunction Feb. 21 blocking a commercial fishery on the west coast of Vancouver Island. The decision came after an internal memo revealed Shea overruled recommendations of scientists in her own department. Shea recommended opening the fishery in three disputed areas and in a hand-printed note alongside her signature wrote, “The minister agrees to an opening at a conservative 10-per-cent harvest rate for the 2014 fishing season.”

For every region on the coast, a “commercial cutoff” is established based on the health of herring stocks in that region. When stocks exceed the cutoff, commercial fishing is allowed at rates as high as 20 per cent of the biomass.

The Heiltsuk are asking the minister to add an 18,000-tonne “cushion” to that cutoff to help ensure sufficient stocks for aboriginals.

Natives plan to proceed with a 108-tonne spawn-on-kelp fishery this year on the central coast. Said McAllister: “It is a truly sustainable alternative to the industrial model that has killed herring stocks across the province.”

The federal government is appealing the federal court decision in the Nuu-chah-nulth case.

The Herring Industry Advisory Board supports the minister’s decision to allow the openings, but announced in a news release March 17 that the fishing industry, federal government and Haida had reached an agreement to forego both a commercial fishery and an aboriginal spawn-on-kelp fishery. “It was deemed more appropriate to stand down for this year to limit conflict with the Haida and work toward ensuring the science is good for next year,” said board chair Greg Thomas.

He noted that herring stocks are “near historic highs” in the Strait of Georgia, with seiners catching just over 6,800 tonnes and gillnetters just over 5,400 tonnes this season. That may help to explain the presence of herring spawning locally, including Boundary Bay, where they have reportedly not been seen in years.