Kerry and Lavrov talks on the Ukraine

RT: "Russia and the US have agreed to seek common grounds to deescalate tensions".

The Guardian: "Russia set out a series of tough conditions on Sunday night for agreeing a diplomatic solution to the crisis over its annexation of Crimea"

Notice the different tone between RT and the Guardian

Although expressing different points of view on the roots of Ukraine crisis, Russia and the US have agreed to seek common grounds to deescalate tensions and implement necessary reforms, having in mind that Ukrainians themselves should decide their future 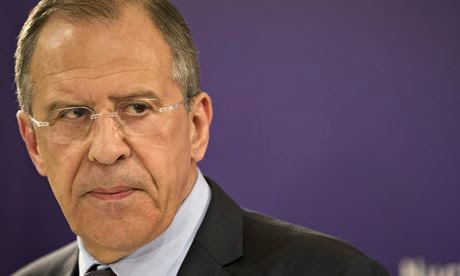 “We have conducted intensive negotiations in the first place, on the crisis in Ukraine,” Russian Foreign Minister Sergey Lavrov said after 4 hours of negotiations with his US counterpart. “Expressed dissenting views on its causes, but agreed to seek common ground to resolve the situation in Ukraine.”

The ministers shared with each other their suggestions on how to deescalate the situation but both agreed that the Ukrainian people should take the leading role in deciding their own future.
“We have agreed to work with the Ukrainian government, the Ukrainian people in the broadest sense, to achieve the implementation of such priority measures as minority rights, language rights, disarmament of provocateurs, implementing constitutional reforms and having free and fair elections under international supervision,” Lavrov told journalists.

The Russian foreign minister stressed that neither Russia nor the United States can impose any plans on Ukraine, drafted unilaterally without the Ukrainian side.
“We discussed the constitutional reform, in favor of which we stand together with the Americans… And which, as I understand it, the Ukrainian authorities have committed to.” Lavrov said.

“We are convinced that federalization is a very important component of this reform, the most important is to ensure the unity of Ukraine taking into account the interests of all regions of the country, without exceptions, so that the country functions as a state. We need to find a compromise, consensus among all regions,” the minister added.

US Secretary of State John Kerry confirmed that “differences of opinion about events” that led to Ukraine crisis did not stop the sides from looking for ways to de-escalate the security and political situation “in and around Ukraine.”

“The US and Russia have differences of opinion about events that led to this crisis but both of us recognize the importance of finding a diplomatic solution and simultaneously meeting the needs of the Ukrainian people, and that we agreed on tonight," Kerry said. 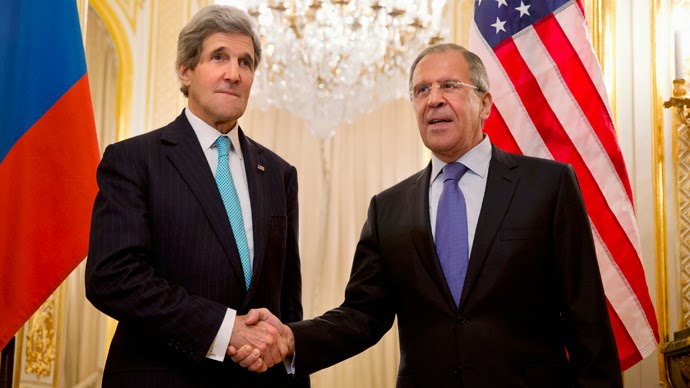 Russia set out a series of tough conditions on Sunday night for agreeing a diplomatic solution to the crisis over its annexation of Crimea, demanding that the US and its European partners accept its proposal that ethnic Russian regions of eastern and southern Ukraine be given extensive autonomous powers independent of Kiev.

Emergency talks between Sergei Lavrov, Russia's foreign minister, and John Kerry, the US secretary of state, got under way at the Russian ambassador's residence in Paris after a day in which tensions over Ukraine deepened appreciably. Neither man made any substantive comment before the talks began. Suggesting it might be a long session, Lavrov told reporters: "Good luck and good night."

The meeting took place against an ominous backdrop of the massing of an estimated 40,000 Russian troops on Ukraine's eastern border and warnings from Nato and the Pentagon that the Russian military activity, ostensibly relating to routine exercises, was abnormal and could be a prelude to an invasion.

General Philip Breedlove, Nato supreme allied commander Europe and the head of the US military's European Command, was ordered back to his post in Brussels during a visit to Washington after Chuck Hagel, the US defence secretary, pointed to "a lack of transparency" from Russia about the troop movements. Unlike Moscow, Washington has said it will not resort to force to resolve the crisis.

The US has called on Russia to disarm irregular forces in Crimea, admit international observers and pull its troops back from the eastern border. But speaking to Russian state television before the talks, Lavrov laid out Moscow's own quite different terms for a deal. Primarily, he said, Russia was seeking a federal solution for Ukraine as part of "deep constitutional reform".

"Frankly speaking, we don't see any other way for the steady development of the Ukrainian state apart from as a federation," he added. Under the Russian plan, which Barack Obama and Vladimir Putin reportedly discussed in a phone call initiated by Moscow on Friday, each region would have control of its economy, taxes, culture, language, education and "external economic and cultural connections with neighbouring countries or regions," Lavrov said.

"Given the proportion of native Russians [in Ukraine], we propose this and we are sure there is no other way."

The Russian proposal to radically alter the way Ukraine is governed and administered is certain to arouse strong opposition in Kiev, where it will be viewed by critics of Moscow's intervention in Crimea as a roundabout way of breaking up or partitioning the country.

In an apparent attempt to assuage concerns in Kiev and western capitals about Russian intentions, Lavrov said there were no plans to invade eastern Ukraine.

Latest US intelligence estimates based on satellite data indicate that Russia has amassed 40,000 troops on the Ukrainian border, including a wide range of special units, elite forces and equipment.

"We have absolutely no intention of, or interest in, crossing Ukraine's borders," Lavrov said. "We [Russia and the west] are getting closer in our positions."

He said Moscow's terms for defusing the crisis, the worst between the west and Russia since the end of the cold war, also included a pledge by Kiev's government that Ukraine would not seek to join Nato.

The eastward expansion of Nato since the collapse of the Soviet Union was one of the main grievances Putin expressed in a speech in Moscow earlier this month when Crimea joined the Russian Federation.

Lavrov said Russia remained determined to protect the rights of Russian speakers in eastern and southern Ukraine and implied that it reserved the right to take appropriate action if its proposals for a federation and other settlement terms were not accepted.

Putin told Obama the fate of the breakaway region should be solved not by force but by talks in the 5+2 format of Moldova, Transnistria, the Organisation for Security and Cooperation in Europe, Russia and Ukraine, with the EU and US as observers.

The Kremlin said Putin had suggested "examining possible steps the global community can take to help stabilise the situation" in the region.

It was unclear what response the US and its EU partners would make to the Russian demands as the Kerry-Lavrov meeting in Paris got under way.

The Obama administration has insisted Russia withdraw its forces from Crimea, reduce its military build-up on the eastern border, respect the territorial integrity of Ukraine and support national polls due in May to elect a new president and government.

The US and EU imposed limited sanctions on Russia following the annexation of Crimea. Lavrov said the measures had had little impact. "I don't want to say that sanctions are ridiculous and that we couldn't care less, these are not pleasant things … We find little joy in that, but there are no painful sensations. We have lived through tougher times."

Lavrov made no mention of the Ukraine elections or any possible withdrawal from Crimea. Many analysts now predict that in any deal, the US and its western allies, and thus Kiev, will be forced to accept the annexation as a fait accompli.

In another sign of a possible compromise, Lavrov has offered to talk to representatives of Ukraine's interim government under certain conditions. Russia does not recognise the current leadership in Kiev, which it says mounted a "fascist coup" in February to oust Ukraine's elected president, Viktor Yanukovych.

In other developments, the Tatar assembly meeting in the historic capital of Bakhchisaray voted in favour of seeking "ethnic and territorial autonomy" within Crimea.

The 300,000-strong minority make up less than 15% of Crimea's population of 2 million and has strongly opposed the Russian annexation. The proposal to seek autonomy was seen as a sign that the group is now ready to accept the new status quo and negotiate their place in it with Russia.

In Kiev, the presidential election effectively became a two-horse race at the weekend when the boxer-turned-politician Vitali Klitschko pulled out and threw his weight behind the billionaire confectionery oligarch Petro Poroshenko, known as the Chocolate King. He will now face the former prime minister, Yulia Tymoshenko, on 25 May.


Oligarchs, Fascists and the People's Protest in Ukraine