Who is the source of all this information about a 30,000 Russian build-up?

It is Andriy Parubiy who is the the Secretary of the National Security and Defence Council of Ukraine – part of the self-appointed government.

Together with Oleh Tyahnybok he set up the Social-National Party of Ukraine.

Think he has changed his spots?

Just like the thug Oleksandr Muszychko is a hero and a 'Robin Hood figure'!

Who is Andriy Parubiy? 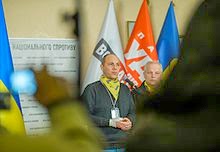 Andriy Volodymyrovych Parubiy (Ukrainian: Андрій Володимирович Парубій) is a Ukrainian politician[2] and the Secretary of the National Security and Defence Council of Ukraine, appointed after leading the anti-government protests in the 2014 Ukrainian revolution.[3]

In the years leading up to the Ukrainian independence in 1991 Parubiy was an independence activist and was arrested for holding an illegal rally in 1988.[2] In 1991 he founded the Social-National Party of Ukraine together with Oleh Tyahnybok; the party combined radical nationalism and some neo-Nazi features (by its name and the "Wolfsangel"-like sign).[4][5][2] In 1998-2004 Parubiy led the paramilitary organization of SNPU, the Patriots of Ukraine.

Parubiy co-led the Orange Revolution in 2004.[2][6] In the 2007 parliamentary elections he was voted into the Ukrainian parliament on an Our Ukraine–People's Self-Defense Bloc ticket.[2] He then became a member of the deputy group that would later become For Ukraine!.[2] Parubiy stayed with Our Ukraine and became a member of its political council.[7]

In February 2010 Parubiy asked the European Parliament to reconsider its negative reaction to former Ukrainian President Victor Yushchenko's decision to award Stepan Bandera, the leader of the Organization of Ukrainian Nationalists, the title of Hero of Ukraine.[8]

In early February 2012 Parubiy left Our Ukraine because their "views diverged".[9] In 2012 he was re-elected into parliament on the party list of "Fatherland".[10]
From December 2013 to February 2014 Parubiy was a commandant of Euromaidan.[11] He was coordinator of the volunteer security corps for the mainstream protesters.[12]

“The new Secretary of the powerful National Defense and Security Council is Andriy Parubiy, is also listed as being from the Fatherland party. But here the murky divide between the right-wing and fascist parties comes into view.

Parubiy was co-founder of the Social National Party in 1991, an openly fascist party whose symbol was the “Wolfsnagel,” which closely resembles a swastika. The SNP changed its name to Svoboda (“Freedom”) in 2004, and has tried to somewhat moderate its image while retaining its neo-Nazi core.

It was only in 2012 that Parubiy ran on the Fatherland ticket. During the opposition demonstrations in the Maidan Square, he was known as “the commandant.”

That's their idea of a reliable source?!!

Mr. Porubiy must be delighted that the US media is fawning over him.

http://robinwestenra.blogspot.co.nz/2014/03/look-who-western-media-quotes-as-source.html
Posted by seemorerocks at 20:47