I doubt if the Ukrainians will like it, or their 'government'. Here begins the march to full - blown fascism.

I predict a sticky end for Yatsenuk and his self-declared government.

The Ukrainian parliament has adopted an anti-crisis bill proposed by the IMF to secure an international financial aid package. Ordinary Ukrainians will have to tighten their belts to help the coup-installed government keep the collapsing economy afloat. 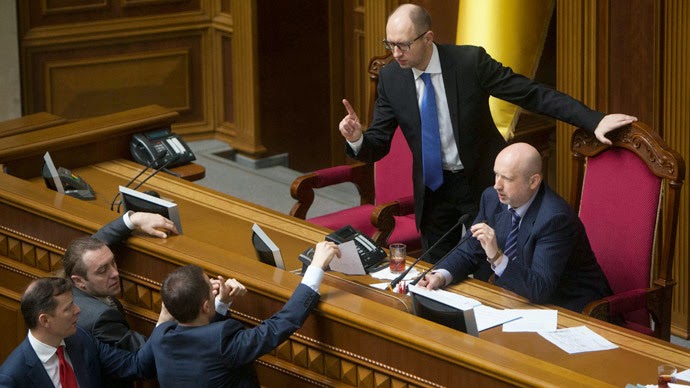 It took two readings of the bill for 246 MPs out of 321 registered to approve the austerity measures outlined in the legislation dubbed “On prevention of financial catastrophe and creation of prerequisites for economic growth.”
Ahead of the vote, Ukrainian self-imposed Prime Minister Arseny Yatsenyuk told the Parliament that it had “no other choice but to accept the IMF offer,” as country fiscal gap in 2014 is projected to reach $26 billion. Ukraine's Finance Ministry says it needs $35 billion over the next two years to avoid default.

“The country is on the edge of economic and financial bankruptcy,” Yatsenyuk said. “This package of laws is very unpopular, very difficult, very tough. Reforms that should have been done in the past 20 years.”

It is ordinary Ukrainians who will suffer the most under the new austerity measures as the floating national currency is likely to push up inflation, while spike in domestic gas prices will impact every household. Under the IMF conditions Kiev has to cut the budget deficit, increase retail energy tariffs, and shift to a flexible exchange rate.
The state-owned energy company Naftogaz already said that it will increase household gas prices by 50 percent starting May 1, while utility companies will see a 40 percent rise as of July. According to estimates, this year Ukraine’s economy will contract by 3 percent while inflation will rise to 14 percent. The government is not planning to raise minimum wages in response to inflation.
The law adopted on Thursday, in particular, introduces a permanent application of the basic rate of corporate income tax at 18 percent and VAT at 20 percent, according to RBC-Ukraine. The government will also cancel the VAT refund for grain exporters.
The bill also introduces a 15 percent tax rate on pension payments if they exceed 10 thousand hryvnas (about $900). This tax, however, won’t really hurt an ordinary Ukrainian pensioner since an average pension in Ukraine is $160 – which may be further cut by 50% for those still working.
A progressive personal income taxation scale has also been installed to charge individuals 15, 17, 20 and 25 percent depending on their earnings. Those persons who make over 1 million hryvnas will be charged 25 percent income tax.
Car enthusiasts will also suffer as taxes on new cars and motorcycles with engine capacity exceeding 0.5 liters will also be doubled. Those who shop online and use overseas retailers will now see lowering of the limit on tax-free imports from 300 to 150 euros.
Excise taxes on alcohol and tobacco will also go up. In 2014 spirits price will see a 39 percent increase, while tobacco products will see a rise of 31.5 percent. Beer lovers will suffer the most with a 42.5 percent rise.
The legislation also reduces the total number of personnel in law enforcement agencies. Almost 80,000 people will be dismissed in the Ministry of Internal Affairs, Security Service, the Office of the State Guard, and the prosecutor's office. The International Monetary Fund has agreed to throw Ukraine’s sinking economy a lifeline provided the country adopts severe austerity measures. According to a preliminary agreement announced by the IMF, it would provide Kiev between $14 and $18 billion in loans over the next two years. Pending final approval by the IMF’s board, Ukraine could get their hands on the first installment as early as April.


“The mission has reached a staff-level agreement with the authorities of Ukraine on an economic reform program that can be supported by a two-year Stand-By Arrangement (SBA) with the IMF,” the Fund said in a press release.

A successful deal with the IMF is expected to unleash further $10 billion in loans from other international partners, including the EU and the US. The World Bank is also considering the possibility of providing Ukraine with $1 to $3 billion. Canada, Japan and Poland are also contemplating financial aid.
“The financial support from the broader international community that the program will unlock amounts to US$27 billion over the next two years. Of this, assistance from the IMF will range between US$14-18 billion, with the precise amount to be determined once reforms are in place,” the IMF said.

In Washington, both the Senate and House of Representatives passed a bill on Thursday to provide a $1 billion loan guarantee aid to Ukraine. In addition the Senate bill includes $50 million for democracy building and $100 million for enhanced security cooperation.
“This significant support will help stabilise the economy and meet the needs of Ukrainian people over the long term because it provides the prospect for true growth,” US President Barack Obama said in Rome.

Despite the promised injection of cash into Ukraine, Nikolay Gueorguiev, IMF Mission Chief for Ukraine said that “Nonetheless, the economic outlook remains difficult, with the economy falling back into recession,” he said cited by Kyivpost. “With no current market access, large foreign debt repayments loom in 2014-2015.”