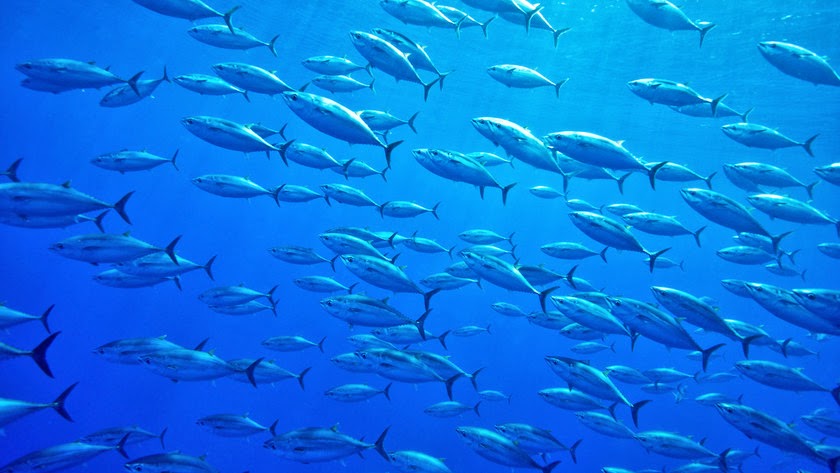 
Crude oil from BP Plc (BP/)’s 2010 Gulf of Mexico spill may have led to heart defects and premature death for tuna, researchers backed by the National Oceanic and Atmospheric Administration report.

Exposure to the oil may slow or cause an uncoordinated rhythm in the heartbeat of developing Atlantic bluefin and yellowfin tuna and an amberjack species, according to a study published yesterday in the Proceedings of the National Academy of Sciences. Damaged hearts may reduce swimming performance, jeopardizing a fish’s survival.
“The timing and location of the spill raised immediate concerns for bluefin tuna,” Barbara Block, a professor of biology at Stanford University who helped write the study, said in a statement. “This spill occurred in prime bluefin spawning habitats, and the new evidence indicates a compromising effect of oil on the physiology and morphology of bluefin embryos and larvae.”
The April blowout of BP’s Macondo well gushed oil for 87 days, fouling beaches from Florida toLouisiana and forcing the U.S. to shut about 37 percent of the Gulf to fishing. Most areas reopened in late 2010. It was the worst U.S. offshore spill and spewed about 4.9 million barrels of oil and forced London-based BP to sell about $38 billion in assets to pay for clean up and compensating victims.
The defect cited in the study may doom affected tuna later in life, Jacqueline Savitz, vice president for U.S. Oceans for the environment group Oceana, said in response to the report.

“It’s a real reminder that offshore drilling continues to be extremely unsafe and leads to impacts on marine life,” Savitz said in an interview. “Whether those fish were healthy enough to survive and help rebuild struggling populations of bluefin tuna still remains to be determined.”
Fish exposed to crude oil may have permanent changes in heart shape that reduce swimming performance later in life, said John Incardona, NOAA research toxicologist and the study’s lead author.
“This creates a potential for delayed mortality,” Incardona said in a statement. “Swimming is everything for these species.”
Researchers exposed tuna larvae raised in land-based hatcheries to oil collected at the time of the spill. Developmental abnormalities were seen at concentrations below those measured during the spill, according to the study.

“The paper provides no evidence to suggest a population-level impact on tuna, amberjack” or other fish from the ocean living in the Gulf, BP spokesman Jason Ryan said in an e-mailed statement. “The authors themselves note that it is nearly impossible to determine the early life impact to these species.”
The research is part of the Natural Resource Damage Assessment for the Gulf ecosystem after the Deepwater Horizon spill. The findings include contributions from researchers at NOAA, Stanford University, the University of Miami’s Rosenstiel School of Marine and Atmospheric Sciences and the University of the Sunshine Coast in Queensland, Australia.
In September 2012, the U.S. National Marine Fisheries Service said Gulf fisheries were rebounding, with fishermen landing larger catches during the 2012 fishing season than they did in 2009, the year before the spill.
“We know from the 1989 Exxon Valdez spill in Prince William Sound that recently spawned fish are especially vulnerable to crude oil toxicity,” Nat Scholz, leader of the ecotoxicology program at NOAA’s Northwest Fisheries Science Center in Seattle, said in a statement. “That spill taught us to pay close attention to the formation and function of the heart.”