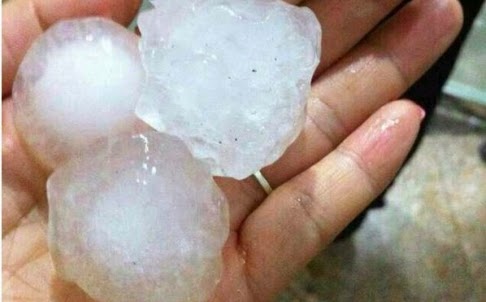 
Giant hailstones pounded parts of Hong Kong tonight as thunderstorms echoed around the city and the Black Rainstorm warning was issued for just the second time in two years.


Hailstones the size of golfballs were reported in Tsuen Wan as festivities to mark the end of the Hong Kong Rugby Sevens were washed out.


Thunderstorms were accompanied by near constant flashes of lightning as the Observatory stated that more than 70 millimetres of rain had fallen in some parts in less than an hour.

Rain pours through shattered windows at the Festival Walk shopping mall in Kowloon Tong during the storm. Photo: SCMP Pictures


The Observatory calculated that lightning had struck a total of 2,041 times in just one hour from 9pm, including 482 hits on Hong Kong Island and Kowloon.


Windows at the Festival Walk shopping mall in Kowloon Tong were smashed by the hail, causing widespread flooding inside the mall.
Send your pictures to onlinenews@scmp.com


A stack of more than 20 cargo containers collapsed at the container terminal in Kwai Chung.


Flights were disrupted, with 65 departures delayed and nine inbound flights diverted to other airports in China and Macau.


"Heavy rain is affecting the northern part of the New Territories, especially in Yuen Long, Pat Heung and Kam Tim areas. More than 70 millimetres have been recorded in the past one hour," the Observatory said.

"Hail was reported at Wong Tai Sin at around 8.30pm," the Observatory added, saying that gusts reaching 100kmh had been reported.

The last Black Rainstorm warning was issued in May 2013.

A lorry is crushed beneath containers at Kwai Chung. The bad weather came a day after the first big storms of the year soaked crowds at the Hong Kong Rugby Sevens.


Black clouds darkened the stadium before lunchtime Saturday, forcing organisers to switch on floodlights and leading to sodden conditions.


The Observatory said earlier this month that up to seven typhoons were expected to hit the city this year.

It added that as climate change progresses, Hong Kong would see more extreme weather in the future.