I'll leave it to you to find the appropriate words to respond to this.

Polar Vortex Emboldens Industry to Push Old Coal Plants
The polar vortex may give new life to aging coal and nuclear power plants in the U.S. 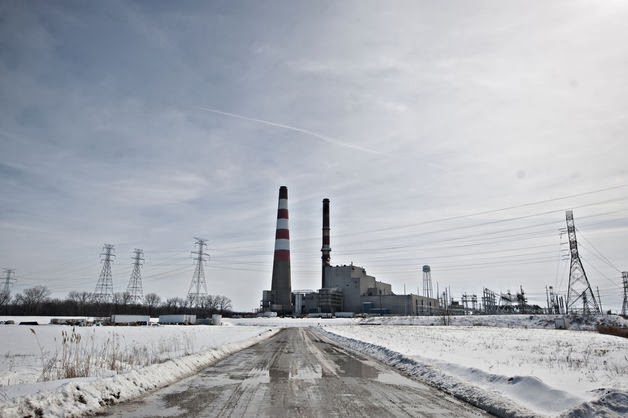 Masses of arctic air rolling down from the North Pole have driven electricity prices to more than 10 times last year’s average in many parts of the country and have threatened some cities with winter blackouts. They’ve also emboldened energy companies to call for extending the lives of older and dirtier coal plants, as well as aging nuclear reactors.

Despite a concerted campaign by environmentalists and public health experts to stanch its use, coal, the most plentiful and cheapest fuel in the world, is proving globally resilient. In the U.S., rising natural gas prices are prodding utilities to switch back to coal at levels not seen since 2011.

Now, Edison Electric Institute, the Washington-based trade group of U.S. investor-owned utilities, is turning to the latest series of cold snaps to bolster their lobbying of the Obama administration and state regulators to keep coal and nuclear generators alive.

“I’ve been advocating fuel diversity so you don’t get overly dependent on any one particular fuel source,” the group’s president, Thomas Kuhn, said during a Feb. 11 interview at Bloomberg News headquarters in New York. “On a regional basis we still want to keep that in mind.”

The recent cold spell exposed the vulnerability of the power sector as more coal plants are retired, said Roshan Bains, director of the utilities, power and gas group at Fitch Ratings Ltd.

The polar vortex has underscored the power industry’s arguments about the need to keep some older coal and nuclear units running instead of replacing them with gas, said Julien Dumoulin-Smith, a New York-based analyst for UBS. “It is not a question of if, but what these power markets will do to address” the issue of fuel diversity, he said.

Now the industry and even some regulators are turning the polar vortex into their latest rallying cry. Twice during the week of Feb. 6, the Northeast was swept by snowstorms that knocked out power to almost 800,000 homes and businesses from Ohio to New York, with the most blackouts occurring around Philadelphia, utility company websites showed. Heavy snow often causes power line and equipment damage.

“That’s what we really counted on during this period,” she said. “As I look at the portfolio we operate, which is a combination of coal and gas and nuclear and pump storage and hydro, we needed every bit of it.”

The polar vortex highlighted the value of round-the-clock nuclear generators, where all but 3 of the nation’s 100 reactors were operating at 90 percent of efficiency during that time, said former Environmental Protection Agency administrator Christine Todd Whitman, who serves as co-chairman of the Clean and Safe Energy Coalition, a nuclear industry funded advocacy group in Washington.

Acting Federal Energy Regulatory Commission Chairman Cheryl LaFleur said the agency will hold a meeting in Washington on April 1 to discuss the weather’s impact on gas and electric markets and lessons to be learned from the recent cold spells.

“The cold weather this winter has tested both the electric grid and our markets,” LaFleur said at the commission’s monthly public meeting on Feb. 20.

In December, the agency warned Congress that there could be rolling blackouts by 2016 in the U.S. Midwest, where the grid operator has projected a shortfall in its power reserves because of coal generator retirements.

About 60 gigawatts of coal plants, or 6 percent of the nation’s total capacity, are expected to be forced out of business by the end of the decade because of new environmental rules, according to the U.S. Energy Information Administration. The plan is to replace those with gas-fueled generators, which depend on a steady stream of fuel that can be crimped when demand for heating spikes or pipelines are shut.

“The challenge, especially in the Northeast, is the lack of gas pipeline infrastructure that would reliably supply new generation facilities with gas,” said Ed Hirs, a lecturer on energy economics at the University of Houston. Hirs said he sees pressure being put on the U.S. environmental regulators by industry and lawmakers to keep some coal plants operating longer for the sake of grid reliability.

“Coal’s not going away,” Mike Loreman, head of U.S. coal origination at Mercuria Energy Trading SA, said in Austin, Texas, on Feb. 19. “This winter has shown the potential for coal to flex.”

In New England and New York, gas now provides more than 50 percent of electricity generated in the region, above the national average and up from about 30 percent more than a decade ago. The region has suffered through two consecutive winters of soaring prices and constrained supplies.

“Coal should have died four times already, but coal is very effective,” said Michael Webber, deputy director of the energy institute at the University of Texas at Austin. Despite the pollution problems it brings, the fossil fuel will continue to be part of the country’s energy mix, he said.