The Antarctic Half of the Global Thermohaline Circulation is Collapsing 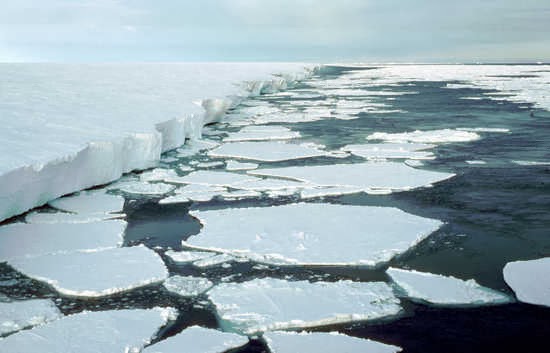 Edge of the Filchner-Ronne Ice Shelf in the Weddell Sea, Photo: Ralph Timmermann, Alfred Wegener Institute. Freshening of water on the top layer of the ocean, caused by increasing glacial melting and increasing precipitation has stopped the formation of a large area of open water in this region. This area of open water the size of New Zealand produced a huge volume of cold salty Antarctic bottom water in the 1970s. This source of the coldest water in the ocean has shut down since then because the fresh water layer is preventing warmer, saltier water from below from coming to the surface.

The largest source of the coldest water in the world's oceans ceased producing Antarctic Bottom Water in 1976. The surface water around Antarctica, which has be been freshening since the 1950's, formed a lid of low-density water stopping the overturning process in the Weddell sea near the coast of Antarctica. The Weddell Sea polynya, an area of open water the size of New Zealand, was the most productive source of cold Antarctic bottom water in the 1970s. Relatively warm salty water is pushed upwards by ocean currents moving over a ridge in the Weddell sea. Before 1980 this salty water reached the surface releasing large amounts of heat, then cooled and sank to the bottom of the ocean. The heat kept the huge hole in the ice pack called a polynya open, and a massive oceanic convection cell formed in the Antarctic winter. This convection cell cooled the global oceans while warming the air around Antarctica. Antarctic Bottom Water, the most voluminous water mass in the oceans, is now being replaced by warmer, less dense water masses as the deep oceans warm.
The Nimbus 5 satellite made the surprising discovery of a large hole of fresh water in the sea ice near the Antarctic coast in the Weddell sea in 1974. That hole reappeared each winter until 1976 then was never seen again.

In the mid-1970s, Nimbus sensors were recording sea ice concentrations in the Southern Ocean surrounding Antarctica when they detected a large ice-free opening in the ice pack. This patch of open water, called a polynya, recurred each winter between 1974-76, and has not retuned since. In the image at left, Antarctica is colored black and sea ice concentrations appear in shades of red and orange. The Weddell Sea polynya is the light blue (open water) area in the upper left quadrant of the image. Credit: Claire Parkinson (NASA GSFC)

This research study used the most advanced climate models and extensive reanalysis of oceanic and atmospheric data from the Antarctic to understand how the Weddell sea polynya worked and what caused it to fail. The researchers discovered that the polynya was not a rare event when pre-industrial conditions were input into the models. However, when models were run under present and future conditions affected by increasing levels of greenhouse gases from human activities, the surface water freshened, and the ocean stratified. They found that anthropogenic global warming causes increasing precipitation and glacial melting, which puts a fresh water lid over the Weddell Sea, preventing Antarctic Bottom Water formation.

That increase in freshwater is coming from two sources: Climate change has amplified the global water cycle, increasing both evaporation and precipitation. And Antarctic glaciers have been calving and melting at a greater rate. Both of these sources end up contributing more freshwater to the Weddell Sea than what the area experienced in the past, the researchers note.


To look at what the future might hold for this system, de Lavergne and colleagues turned to a set of 36 climate models. Those models, which predict that dry places of the world generally get drier and wet places get wetter, show that this area of the Southern Ocean should see even more precipitation in the future. The models don’t include melting glaciers, but those are expected to add more freshwater, which could make the lid on the system even stronger, according to the researchers.

The failure of the huge convection cell in the Weddell sea has reduced the transport of heat, salt and ocean water towards Antarctica. Heat has built up in the tropical and subtropical oceans. The strong thermal gradient between cold Antarctica and the warming waters in the southern hemisphere's temperate zone and subtropics has intensified the winds around Antarctica as the jet stream was pushed closer to Antarctica by the expanding subtropical belt. Moreover, the heating of the tropical oceans has increased tropical convection. These processes have combined to intensify the water cycle, strengthen the subtropical high pressure areas, and increase the strength of the trade winds.

The source of Antarctic Bottom Water in the Weddell sea labelled W at the bottom of the figure has failed because the ocean surface water has freshened forming a lid over the deeper warmer, saltier waters.

The strengthened winds have spun up the strong current that rings Antarctica called the Antarctic Circumpolar Current. This ring of fast moving water tends to block the transport of warm subtropical water towards Antarctica. However, the geography of the northern hemisphere has the opposite effect on the poleward transport of warm subtropical water. The Atlantic ocean is aligned to funnel warm subtropical water into the Arctic ocean as the subtropical highs strengthen and the trade winds speed up. Thus, the collapse of the Weddell Sea polynya has lead to increased transport of oceanic and atmospheric heat towards the Arctic. The rapid warming of the Arctic and the extraordinarily rapid decline of Arctic sea ice, which was not predicted by climate models, is a likely consequence of the collapse of the Weddell Sea polynya, which had been the most productive source of Antarctic Bottom Water (ABW). The authors of this report don't discuss the effects of the end of Weddell Sea bottom water formation on the global ocean circulation or the Arctic (the discussion here is based on my extensive review of paleoclimatology research) but they do hint at the importance of the decline in ABW formation.

In 1974, newly available satellite observations unveiled the presence of a giant ice-free area, or polynya, within the Antarctic ice pack of the Weddell Sea, which persisted during the two following winters. Subsequent research showed that deep convective overturning had opened a conduit between the surface and the abyssal ocean, and had maintained the polynya through the massive release of heat from the deep sea. Although the polynya has aroused continued interest the presence of a fresh surface layer has prevented the recurrence of deep convection there since 1976, and it is now largely viewed as a naturally rare event.


Here, we present a new analysis of historical observations and model simulations that suggest deep convection in the Weddell Sea was more active in the past, and has been weakened by anthropogenic forcing. The observations show that surface freshening of the southern polar ocean since the 1950s has considerably enhanced the salinity stratification. Meanwhile, among the present generation of global climate models, deep convection is common in the Southern Ocean under pre-industrial conditions, but weakens and ceases under a climate change scenario owing to surface freshening. A decline of open-ocean convection would reduce the production rate of Antarctic Bottom Waters, with important implications for ocean heat and carbon storage, and may have played a role in recent Antarctic climate change.

This research study did not take into account the discovery of a large volume of fresh water on the western side of the Antarctic peninsula produced by melting of massive amounts of glacial ice from below at a depth of 50 to 150 meters. That discovery, which I wrote about 11 months ago, was too recent to be included in this study. Thus, this study probably underestimates the amount of fresh water around Antarctica and its effects on Antarctic Bottom Water (ABW) formation.
A fresh water layer, caused by bottom melting of glacial ice  on the western side of the Antarctic peninsula, has cut production of ABW in areas outside of the Weddell Sea.

The IPCC's models have not considered the effects the collapsing production of Antarctic Bottom Water and political policy has not kept up with the IPCC. We are moving rapidly into uncharted waters as the Arctic melts. Global political policies are not keeping up with the rate of change and our models have, to date, underestimated the rate of change. We are witnessing a total failure of global leadership to deal with changes we caused that are spiraling out of control.