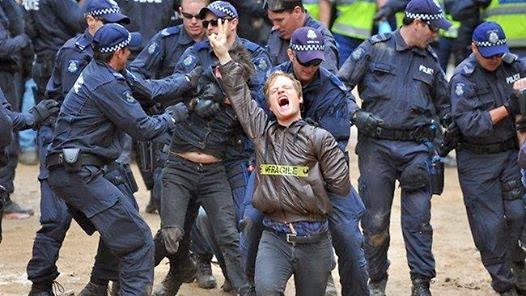 Victorian parliament in Australia passed a bill making protest illegal at 1am this morning.

Police can now order you leave a political protest and then arrest you. In case you were wondering if protest worked, the Liberals think it does. If you wondering what a fascist police state looks like... stay silent... we will all see.

Applauding democracy – it is a riot!

** please note, my website was hit with a DOS attack today. Here is the text of my article people have been interested in. Please note it doesn't contain any hyperlinks, so might not make entire sense on its own. (THE GOOGLE CACHE VERSION WITH HYPERLINKS IS HERE: http://bit.ly/1lV74uh)

So this evening I paid a visit to the Victorian State Parliament with a group of around 30 other people. A diverse mix of folk – amongst them unionists, lawyers, environmentalists, people who could get their house bulldozed for the East West tunnel, people who care about peace, refugees and transparency and democracy.

We were there to watch the Summary Offences and Amendments Sentencing Bill (Anti Protest Bill) get passed. A law which will allow police unprecedented discretionary powers to ‘move on’ peaceful protesters, and others they might suspect of a fairly broad range of things, from public places.
We watched in a fairly subdued manner, with some occasional rumblings as anti choice Liberals such as Bernie Finn, used the platform to throw random vitriol around about concerned community members who voiced their dissent to his fundamentally anti choice, and anti women ‘March for the babies’ events.
A few more folks spoke. The Greens had already spoken against the bill before we arrived and a number of ALP members took to the floor to express concern about a wide range of aspects to the bill.
And then the riot police got called in.
Did the speaker call order when ALP speakers were interrupted for standing up for the rights of union workers? No.  Did the speaker call order when ALP members were interrupted for making points about the disproportionate impact this bill will have on homeless and marginalised people? Or when they were interrupted talking about community legal centre submissions on the bill, and those known militants in the Salvation Army having concerns with this bill?
No, instead after a couple of completely minor interjections, the Speaker decided that this whole darned freedom of speech, public being able to witness ‘democracy’ in action was being so seriously distracting that he closed the gallery. Why? Did someone yell out a bit too dramatically or crank open some bad singing and chanting? Did some ‘serial pest’ activist roll out some audacious banner they cunningly snuck in there? Perhaps try an epic commando roll? Did someone try and kill the Prime Minister of Malaysia or even look a bit funny at one of the Liberals?
NO – there was some relatively subdued clapping when one of the ALP speakers talked about workers rights. GAME OVER. CLOSE THE CHAMBER. WHEN PEOPLE PEACEFULLY RAISE THEIR VOICES IN DISSENT FOR LACK OF ANY OTHER ACCOUNTABILITY OR WAY TO EXPRESS CONCERN – CALL THE CRITICAL INCIDENT RESPONSE TEAM.
Because, apparently a bill being rushed through parliament and a few folk scrambling to get to the gallery in time to witness this abomination, and demonstrate approval for some minor level opposition to our democracy being dismantled – this CLEARLY deserves the riot squad.
In case anyone needs some context about the deep level of concern many share on this bill – Tony Abbotts’ hand picked Federal Human Rights Commissioner Tim Wilson said the following: ”It unnecessarily gives police too much power to move on protesters unjustifiably,” he said. ”I have an issue with the low bar that is being set to give police the powers to move people on.”
The Salvation Army has said “These laws will disproportionately affect marginalised young people, people experiencing homelessness, poverty and mental health issues.”
The government even admitted they would be removing fundamental human rights, “… the laws will, in certain circumstances, limit the rights to freedom of expression, and peaceful assembly and freedom of association”.
You can read submissions against the bill from a range of respected legal and community advocates here – they include: Flemington and Kensington Legal Centre, Human Rights Law Centre, Victoria Equal Opportunity and Human Rights Commission, Fitzroy Legal Service, Law Institute of Victoria, Victorian Trades hall Council, Homeless Law, Federation of Community Legal Centres (Victoria) Inc. Victorian Council of Social Service and Madge.
Two basic overviews of the bill are available here and here.
Many thousands have marched, a massive and wide spread opposition is growing.
The small group of people in that gallery were representative of a much larger movement, of many 1000’s of people who do not want to see democracy further stifled in this state.
We were there for unionists, for teachers, for nurses, for people who fought for the rights we now have. We were there for environmentalists, for people who care for refugees, who care about the city we live in, and who have saved the buildings we now cherish. We were there for those defending their homes and communities from an unwanted road project that will bring no benefit but much pollution, at a cost of billions.
And I was also there for the farmers I have been working to support who could stand to be criminalised by these laws for merely standing at their gates near unwanted and controversial gas mining sites, to defend their land, and our food, from being poisoned and groundwater and livelihoods destroyed.
We bear witness for all that couldn’t be there.
This legislation is yet another step down the slippery slope. If we don’t fight for our rights now, they will take them away. Don’t let this happen.
You can follow the live feed from the evening at #antiprotestlaw and check here for blurry images.
**UPDATE** There have been several media articles about last night. We want to give a big shout to the quality reporting of the Herald Sun who said we ‘stormed’ parliament.  I wonder if they have one of those auto word generators for their articles. I know I like to check my bag, go through a metal detector and get a security pass and sit and listen quietly to speakers for an hour before I do some good old fashioned storming. Slightly less hysterical articles from the Age and the ABC.

The requested URL /applauding-democracy-riot/ was not found on this server.
Additionally, a 404 Not Found error was encountered while trying to use an ErrorDocument to handle the request. 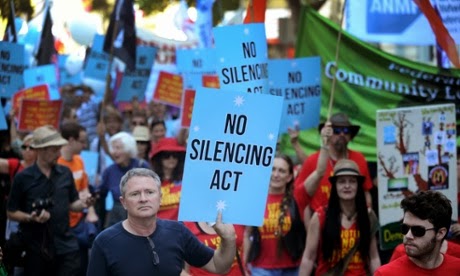 The summary offences and sentencing amendment bill passed by one vote on Thursday afternoon, and will now go to the upper house, the Legislative Council, for approval.

The laws will allow police to issue move-on directions, in which a person or group is ordered to leave a particular area or cease an action, on a range of new grounds.

“Impeding lawful access to premises”, “causing others to have a reasonable fear of violence”, and “engaging in behaviour likely to cause damage to property” can all result in a move-on direction under the changes.

The amendments also beef up the penalty for breaching a move-on order, currently a fine totalling $500, to potential arrest.

A spokesman for Victoria’s Coalition government said in a statement the laws were designed to “end unlawful union pickets and protester blockades that threaten to shut down businesses”.

Work on East-West Link, a major road project, was briefly halted in September last year when protesters blockaded the site and clashed with police.

“Every Victorian has the right to protest and express their views. However, when individuals resort to unlawful tactics that threaten the livelihood of law-abiding businesses, employees and their families, they must be held to account,” the Victorian attorney general, Robert Clark, said.

But critics in the legal fraternity said the laws threaten the fundamental democratic right to protest.

“If people believe they’re engaged in non-violent protest, they won’t be able to hold their ground against police,” Fitzroy Legal Service solicitor Meghan Fitzgerald said. “As soon as the move-on direction is issued, on a reasonable suspicion that your conduct, including future conduct, is likely to cause a breach of the peace, then people can be arrested.”

Powers currently available to the police allow protesters to be excluded from a public area for around 24 hours, Fitzgerald said. “Under these amendments, if people return to the protest site, the police can apply for an exclusion order that lasts up to a year,” she said.

If an individual receives three move-on orders in six months, or five in 12 months, the amendments allow police to apply for an exclusion order, completely banning them from a public area. Breaching an exclusion order will be punishable by up to two years’ jail.

They fear that the vulnerable people might be excluded from public spaces by the new system, but have nowhere else to go, and find themselves imprisoned as a result.

Clark has conceded the new powers limit “an individual’s right to move freely within Victoria … and may, in certain circumstances, limit the rights to freedom of expression, and peaceful assembly and freedom of association”, but he maintains that the new powers comply with Victoria’s Charter of Human Rights and Responsibilities.

If passed in the upper house, as is expected, the laws will come into effect on 1 September this year, just months before November’s state election.

Up until the vote on Thursday it was still uncertain whether the government had the numbers to pass the bill. Victoria’s Coalition government lost its one-vote majority in the lower house when Frankston MP Geoff Shaw left the Liberal party in March last year, facing charges of misconduct and fraud. At the time, he made a verbal agreement to guarantee the government confidence and supply.

The charges against Shaw were dropped in December, but he remains at odds with his former party. Earlier this month he refused to repeat his guarantee that he would back the Napthine government when it presents its budget in May.

Labor is strongly opposed to the new police powers. Which way Shaw would go was a mystery until Thursday afternoon, when he voted with the government to pass the bill by the narrowest margin, a single vote.

Posted by seemorerocks at 10:25