Everyone, including the Guardian, has been talking about a 'pause' in global warming. Turns out the pessimists, like Guy McPherson, were right all long!

The oceans are warming so fast, they keep breaking scientists' charts
NOAA once again has to rescale its ocean heat chart to capture 2014 ocean warming 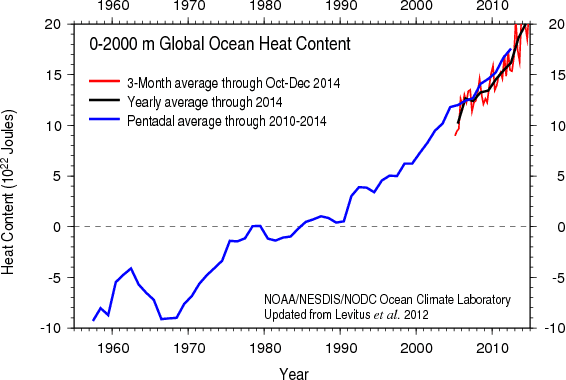 Wow, was this a bad year for those who deny the reality and the significance of human-induced climate change. Of course, there were the recent flurry of reports that 2014 surface temperatures had hit their hottest values ever recorded. The 2014 record was first called on this blog in December and the final results were reported as well, here. All of this happened in a year that the denialists told us would not be very hot.

But those denialists are having a tough time now as they look around the planet for ANY evidence that climate change is not happening. The problem is, they’ve been striking out.

And just recently, perhaps the most important bit of information came out about 2014 – how much the Earth actually warmed. What we find is that the warming is so great, NOAA literally has to remake its graphs. Let me explain this a bit.

The trick to answering this question is to measure the change in energy of the oceans. A thorough review of ocean heat measurement methods is found here; we paid the requisite fee to make the paper open access. Anyone can download and read it.

So what do the new data show? Well, it turns out that the energy stored within the ocean (which is 90% or more of the total “global warming” heat), increased significantly. A plot from NOAA is shown above. You can see that the last data point (the red curve), is, literally off the chat.

The folks at NOAA do a great job updating this graph every three months or so. We can now say that the 2014 Earth had more heat (thermal energy) than any year ever recorded by humans. We can also say that the folks at NOAA will likely have to rescale their graph to capture the new numbers. The NOAA site is updated by Dr. Tim Boyer and can be found here. Click on slide 2 to view the relevant image.

If people want to read a review of ocean heating that is written for a general audience, I suggest our recent peer-reviewed paper which can be found here.

So when we look back on 2014 and the records that fell, it gives us some pause about the so-called pause (hat-tip to Dr. Greg Laden for that phrase). Some people tried to tell us global warming had “paused”, that it ended in 1998, or that the past 15 years or so had not seen a change in the energy of the Earth. This ocean warming data is the clearest nail in that coffin. There never was a pause to global warming, there never was a halt, and the folks that tried to tell you there was were, well, I’ll let you decide. For me, the facts speak for themselves 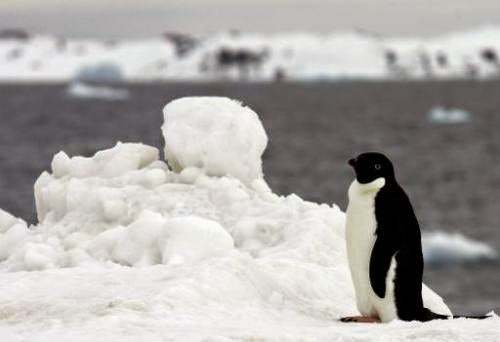 The 120-kilometre (74.4 mile) long Totten Glacier, which is more than 30 kilometres wide, had been thought to be in an area untouched by warmer currents.

But a just-returned voyage to the frozen region found the waters around the glacier were warmer than expected and likely melting the ice from below.

"We knew that the glacier was thinning from the satellite data, and we didn't know why," the voyage's chief scientist Steve Rintoul told AFP.

He said that up until recently the East Antarctica ice sheet had been thought surrounded by cold waters and therefore very stable and unlikely to change much.

But the voyage found that waters around the glacier were some 1.5 degrees Celsius warmer than other areas visited on the same trip during the southern hemisphere summer.

"We made it to the front of the glacier and we measured temperatures that were warm enough to drive significant melt," Rintoul said.

"And so the fact that warm water can reach this glacier is a sign that East Antarctica is potentially more vulnerable to changes in the ocean driven by climate change than we used to think.

Previous expeditions had been unable to get close to the glacier due to heavy ice, but Rintoul said the weather had held for the Aurora Australis icebreaker and a team of scientists and technicians from the Australian Antarctic Division and other bodies. 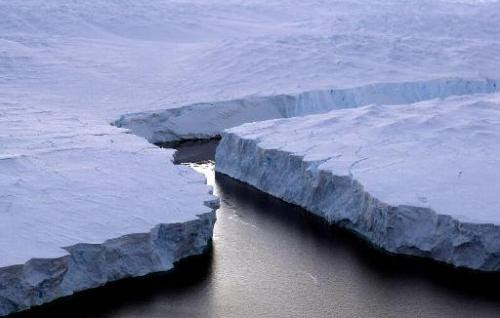 File photo of an iceberg (R) breaking off the Knox Coast in the Australian Antarctic Territory, as seen on January 11, 2008


Rintoul said the glacier was not about to melt entirely overnight and cause a six-metre rise in sea levels, but the research was important as scientists try to predict how changes in ocean temperatures will impact on ice sheets.

"This study is a step towards better understanding of exactly which parts of the ice sheets are vulnerable to ocean warming and that is the sort of information that we can then use to improve our predictions of future sea level rises," he said.

"East Antarctica is not as protected from change as we use to think," he said.

The melt rate of glaciers in the fastest-melting part of Antarctica has tripled over the past decade, analysis of the past 21 years showed, according to research published last month.