Where I am living in Wellington, there has been 5mm of rain so far this month. The average for January is 70m.

Fire crews are battling to gain the upper hand against a 300-hectare blaze in South Island high country near Arthur's Pass. 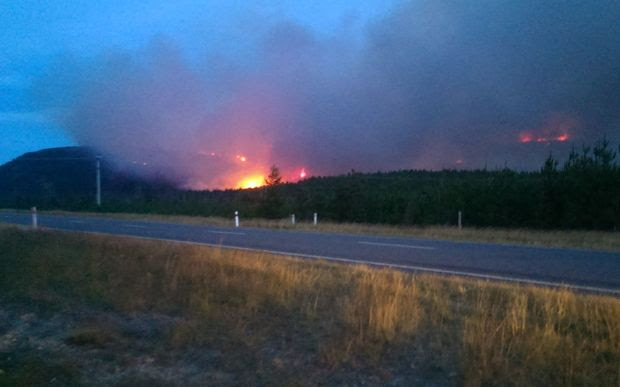 The blaze started on the Flock Hill station by the Craigieburn cutting about 2.30pm yesterday and by this morning had burned through more than 300 hectares.

Helicopters dropping water from monsoon buckets, and planes dropping fire retardant are battling the blaze from the skies for a second day.

An evacuation plan for people living in Castle Hill village had been put together in case north-west winds flared up but at this stage a southerly was forecast.

Department of Conservation (DOC) fire spokesperson Craig Alexander said the fire was still not under control. 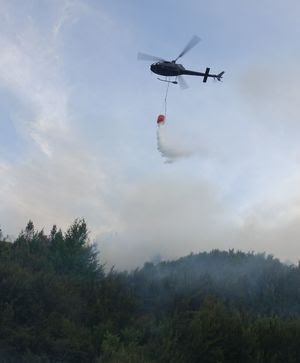 "We've had a huge number of fires across the region so far this year, exceeding numbers for other years, so it's just been a matter of time before something like this happened."

He said water resources were limited in the area and many streams had dried up.
"Yesterday was a bit like chasing a rampaging bull, it was moving from one direction to the other," said Mr Alexander.
Mr Alexander said conditions were less extreme than yesterday, with cooler temperatures forecast.

"With the air support and other resources being brought in today hopefully we can get it under control."

Seven helicopters and four planes were being used today to douse the fire.
Six to eight crews were on their way from as far afield as Franz Joseph and Timaru, to help the 25 firefighters from DOC, the Fire Service, Selwyn District Council and crews.

The fire is not expected to be under control until tonight at the earliest, DOC says, and could take another two to three days to fully put out.

The area has been hot and dry for months, leaving parched manuka, matagouri, and gorse scrub, along with massive areas of pine and beech forests.
Yesterday changing winds pushed the fire from one direction to the other, making it difficult to contain.

State Highway 73 was closed at times, causing big delays for drivers travelling between Canterbury and the West Coast. Vehicles were being escorted through by roading contractors overnight.

Sheep were moved to safety yesterday and the Fire Service was dipping monsoon buckets in nearby Lake Pearson to help extinguish the fire. The focus was on preventing the flames from reaching beech trees in Craigieburn Forest Park. 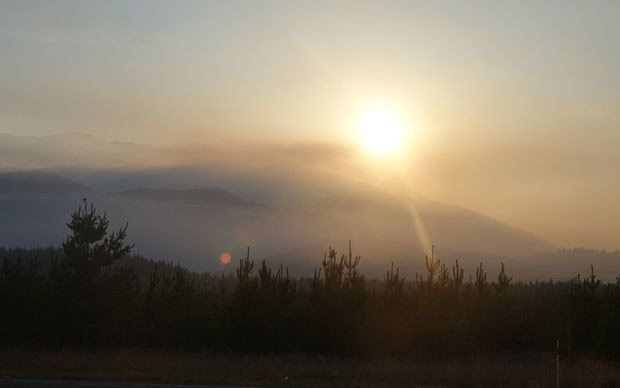 Conditions at Flock Hill were expected to be less extreme today.

When compared to this time last week widespread dryness continues to cover the majority of New Zealand. For the North Island, it’s clear that soil moisture levels have continued to decrease over most, if not all, of the entire island. Furthermore, the coverage of severely drier to extremely drier than normal soils for this time of year has increased.

For the South Island, pockets of showers and thunderstorms were able to provide for some slight to modest soil moisture gains over central and southern Otago as well as parts of the Canterbury and eastern Marlborough regions. Soil moisture levels have decreased compared to this time last week from far northwest Canterbury through to southern Marlborough, to much of the Tasman and Nelson regions.

For the North Island, when considering the current soil moisture anomalies for this time of year, hotspots include most of the eastern part of the island from near East Cape southwest to the Kapiti Coast, as well as much of the central and western Waikato, along with sizeable portions of the Auckland and Northland regions. Southern and far north sections of the Manawatu-Wanganui region are also hotspots.

Computer models are predicting little, or no rain, through to early next week for nearly the whole of the island. As a result, it’s distinctly possible that some hotspot areas will continue to expand. Thereafter, in about 4-5 days, model guidance is suggesting the potential for some meaningful rain for parts of the east coast of the island, in particular from Gisborne to the South Wairarapa. If this were to occur, the hotspot size in this region may decrease.

For the South Island, hotspots exist throughout much of Canterbury and northern and interior sections of Otago. Continued dryness has brought about a new hotspot area from the far eastern Tasman region west and south to Marlborough. Farther south, parts of Southland have continued to dry out over the past 1-2 weeks and will need to be monitored for possible hotspot development.

While there has been a decrease in hotspot coverage over the eastern part of the island, it’s questionable if the benefits from some rain earlier this week will persist as widespread dryness is forecast to persist through early next week for much of the island. Thereafter, model guidance indicates the potential of only patchy areas of rainfall beyond 4-5 days.

For hotspot regions, sustained rainfall over an extended period of time is needed to return conditions back to normal. Additionally, if current conditions persist or worsen, then drought conditions may be imminent.

Hotspot Watch a weekly advisory service for New Zealand media. It provides soil moisture and precipitation measurements around the country to help assess whether extremely dry conditions are imminent.

Pictured below: Soil Moisture Anomaly Maps, relative to this time of year. On the left are values this time last week. On the right are the most recent values. 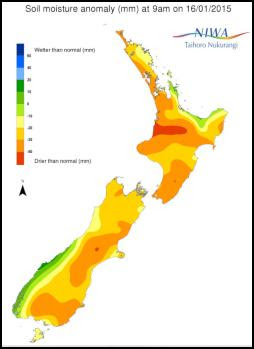 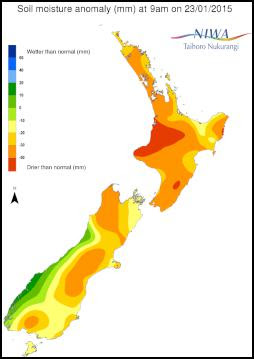 Posted by seemorerocks at 09:55