The Globalization of War. America’s “Long War” against Humanity. 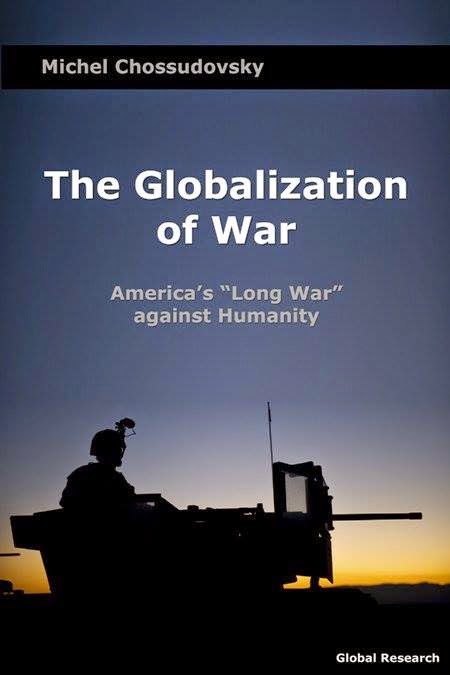 Put together now Charlie Hedbo, Ukraine or the July-August 2014 attack on Gaza by Israeli forces, which was undertaken in close consultation with USA and NATO. The actions in Ukraine and their timing coincided with the onslaught of the attack on Gaza.

America’s hegemonic project in the post 9/11 era is the “Globalization of War” whereby the U.S.-NATO military machine – coupled with covert intelligence operations, economic sanctions and the thrust of “regime change”— is deployed in all major regions of the world. The threat of pre-emptive nuclear war is also used to black-mail countries into submission.

The new book by the Canadian Professor Michel Chossudovsky from Global Research Publishers. Chossudovsky is a Professor of economiscs in University of Ottawa, and a contributor to the French magazine Le Monde diplomatique. After working for the UN as a consultant and advising several governments in Latin America and Africa, he became renowned for his criticism of neoliberalism and the Washington Consensus.

Theme: Crimes against Humanity, Global Economy, US NATO War Agenda
--------
This “Long War against Humanity” is carried out at the height of the most serious economic crisis in modern history. It is intimately related to a process of global financial restructuring, which has resulted in the collapse of national economies and the impoverishment of large sectors of the World population.

The ultimate objective is World conquest under the cloak of “human rights” and “Western democracy”.

““The Globalization of War” comprises war on two fronts: those countries that can either be “bought” or destabilized. In other cases, insurrection, riots and wars are used to solicit U.S. military intervention. Michel Chossudovsky’s book is a must read for anyone who prefers peace and hope to perpetual war, death, dislocation and despair.”
- Hon. Paul Hellyer, former Canadian Minister of National Defence
----
The “globalization of war” is a hegemonic project. Major military and covert intelligence operations are being undertaken simultaneously in the Middle East, Eastern Europe, sub-Saharan Africa, Central Asia and the Far East. The U.S. military agenda combines both major theater operations as well as covert actions geared towards destabilizing sovereign states.

Under a global military agenda, the actions undertaken by the Western military alliance (U.S.-NATO-Israel) in Afghanistan, Pakistan, Palestine, Ukraine, Syria and Iraq are coordinated at the highest levels of the military hierarchy. We are not dealing with piecemeal military and intelligence operations. The July-August 2014 attack on Gaza by Israeli forces was undertaken in close consultation with the United States and NATO. The actions in Ukraine and their timing coincided with the onslaught of the attack on Gaza.

In turn, military undertakings are closely coordinated with a process of economic warfare which consists not only in imposing sanctions on sovereign countries but also in deliberate acts of destabilization of financial and currencies markets, with a view to undermining the enemies’ national economies.

The United States and its allies have launched a military adventure which threatens the future of humanity. As we go to press, U.S.and NATO forces have been deployed in Eastern Europe including Ukraine. U.S. military intervention under a humanitarian mandate is proceeding in sub-Saharan Africa. The U.S. and its allies are threatening China under President Obama’s “Pivot to Asia”.
In turn, military maneuvers are being conducted at Russia’s doorstep which could potentially lead to escalation.

The U.S. airstrikes initiated in September 2014 directed against Iraq and Syria under the pretext of going after the Islamic State are part of a scenario of military escalation extending from North Africa and the Eastern Mediterranean to Central and South Asia.

The Western military alliance is in an advanced state of readiness. And so is Russia.

Russia is heralded as the “Aggressor”. U.S.-NATO military confrontation with Russia is contemplated.

Enabling legislation in the U.S. Senate under “The Russian Aggression Prevention Act” (RAPA) has “set the U.S. on a path towards direct military conflict with Russia in Ukraine.”

“Any U.S.-Russian war is likely to quickly escalate into a nuclear war, since neither the U.S. nor Russia would be willing to admit defeat, both have many thousands of nuclear weapons ready for instant use, and both rely upon Counterforce military doctrine that tasks their military, in the event of war, to pre-emptively destroy the nuclear forces of the enemy.”

The Russian Aggression Prevention Act (RAPA) is the culmination of more than twenty years of U.S.-NATO war preparations,which consist in the military encirclement of both Russia and China:

“From the moment the Soviet Union collapsed in 1991, the United States has relentlessly pursued a strategy of encircling Russia, just as it has with other perceived enemies like China and Iran. It has brought 12 countries in central Europe, all of them formerly allied with Moscow, into the NATO alliance. U.S. military power is now directly on Russia’s borders.”