Every day, (this article from two days ago), we learn new, alarming details about our melting ice caps. " The researchers noticed that two lakes in the region have disappeared. " Obviously the melt water has gone somewhere, presumably into the adjacent ocean raising sea levels.

" A lake disappearing though, is a bizarre occurrence that Cornell University, Michael Bevis, Ohio Eminent Scholar in Geodynamics and professor of earth sciences at Ohio State, who co-authored the paper, call a “milestone” for Greenland’s ice loss. "

Milestone after milestone, unprecedented, " Changes everything we know", the list goes on. The only constant is that there is a never ending litany of bad news on the ice caps. More and more technology is coming on stream and our understanding of our predicament becomes more clear every day and that is that we are rapidly losing the ice caps,the thermostat of the planet is irretrievably broken and the only precedent I can see is the Permian extinction which was dominated by the release of methane as will be the 6th great extinction which we are witnessing today.
---Kevin Hester 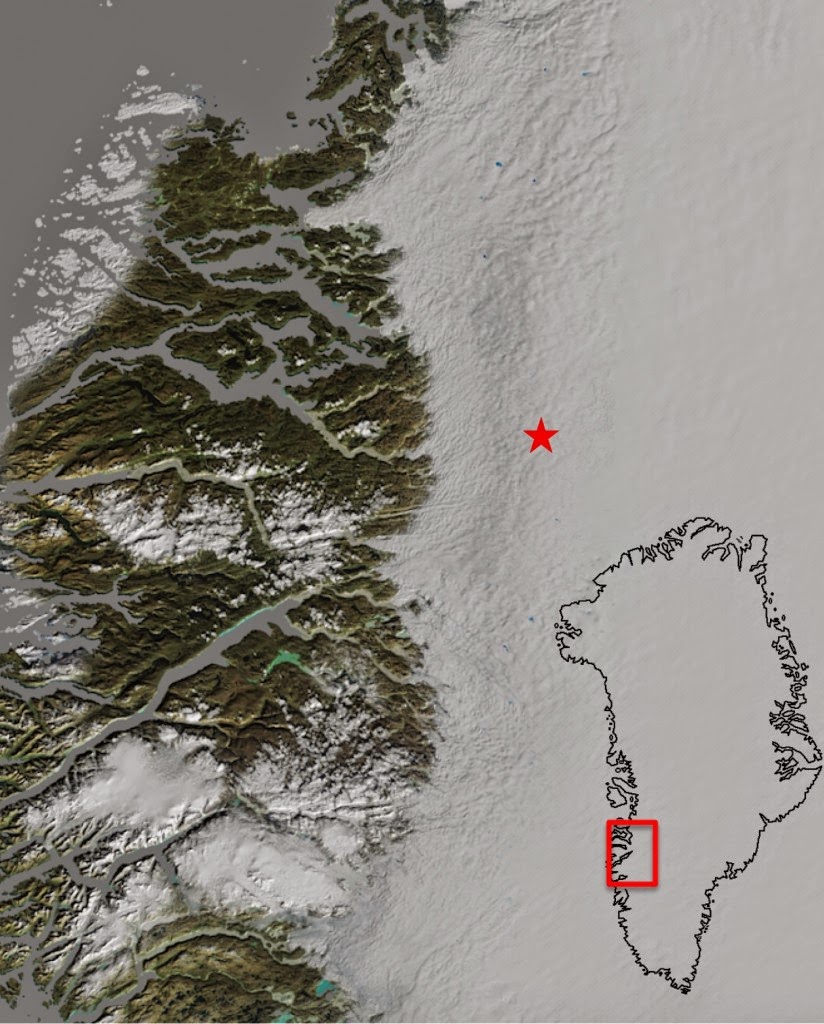 A group of researchers at The Ohio State University made a startling discovery while creating a high-resolution map of Greenland’s ice sheet. The researchers noticed that two lakes in the region have disappeared. The findings on each lake were published separately. The research on the first lake studied was published the open-access journal The Cryosphere. The findings related to the second lake were later published in the journal Nature.

A map of a portion of southwest Greenland. The star marks the location of a drained subsurface lake discovered by Ian Howat of The Ohio State University and his team. Image by Ian Howat, courtesy of The Ohio State University.
Lakes that contain billions of gallons of water form underneath Greenland’s ice sheet. Their existence has been known of and well documented for a long time. A lake disappearing though, is a bizarre occurrence that Cornell University, Michael Bevis, Ohio Eminent Scholar in Geodynamics and professor of earth sciences at Ohio State, who co-authored the paper, call a “milestone” for Greenland’s ice loss.

The researchers believe there is a growing body of evidence that the ice sheet has melted so much that the melt water it creates is flowing into the ice sheet’s “natural plumbing system” which causes “blowouts” to occur, leading to the lakes draining out. One of the lakes that experienced has disappeared has left a mile-wide crater underneath the ice sheet – it only took a few weeks for the lake to completely disappear, with an estimated 6.7 billion gallons of water. For comparison, that amount of water is equivalent to the reservoirs that the 1.9 million people in Columbus, Ohio use for water. 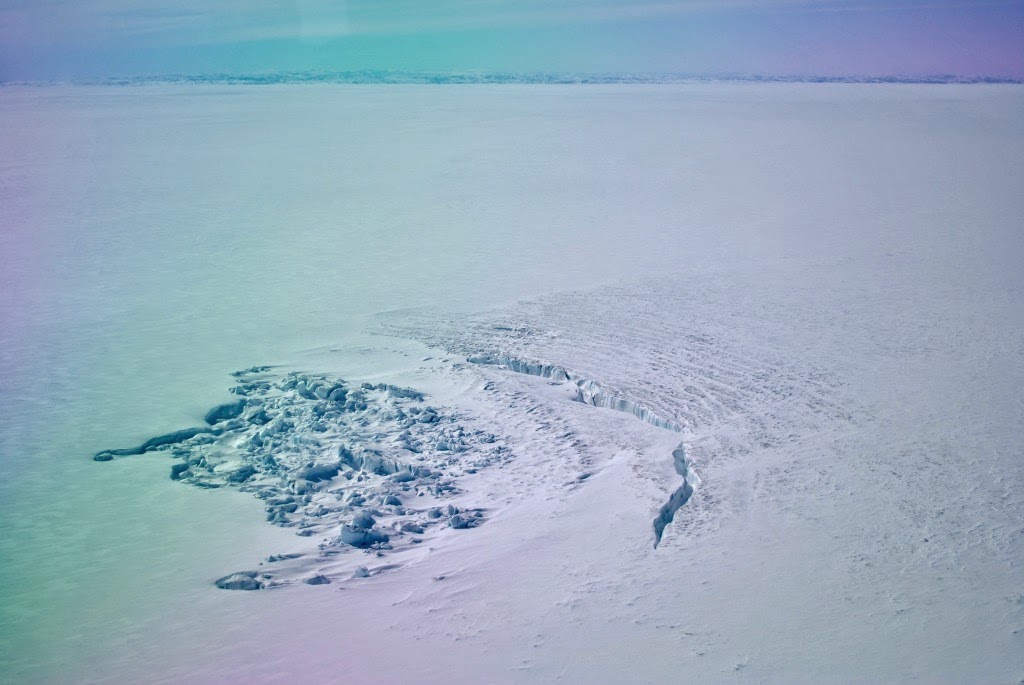 In April 2014, researchers flew over a site in southwest Greenland to find that a sub-glacial lake had drained away. This photo shows the crater left behind, as well as a deep crack in the ice. Photo by Stephen Price, Los Alamos National Lab, courtesy of The Ohio State University.

The other lake studied has shown even more alarming behavior. The lake appears to be draining and re-filling. The lake has already emptied and re-filled twice by melt water. Each time the lake drained it brought with it “latent heat” that further weakens the surrounding ice.

“It’s pretty telling that these two lakes were discovered back to back,” he said. “We can actually see the meltwater pour down into these holes. We can actually watch these lakes drain out and fill up again in real time. With melting like that, even the deep interior of the ice sheet is going to change.”

“Some independent work says that the drainage system has recently expanded to about 50 kilometers inland of the ice edge, which is exactly where this lake is.”

Howet views the drainage as “catastrophic”. He says that we need to continue mapping what lies beneath the ice sheet. Commenting on the possibility this could just be a “really weird” lake  bed he says:

“Until we get a good map of the bed topography where this lake was, we have no idea whatsoever how many lakes could be out there. There may be something really weird in the bed in this particular spot that caused water to accumulate. But, if all you need is a bumpy surface a bit inland from the coast, then there could be thousands of little lakes.”

The melting of the ice at the northern and southern regions of the Earth has long been the most compelling and easily digestible proof to the public that the Earth is experiencing a rapid change in the climate. As researchers begin to learn more about how climate change is changing those regions, we are beginning to see that the changes that are taking place are creating more complex chaos than we previously imagined. 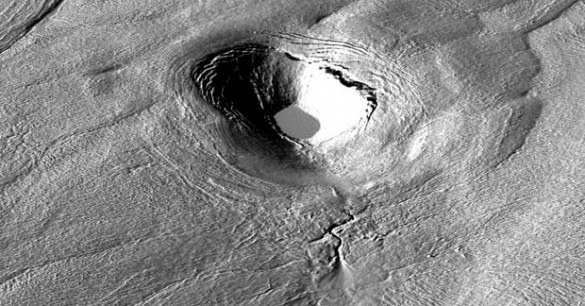