The first batch of sanctions, which was adopted last year and targeted specific individuals accused of fostering conflict in eastern Ukraine, was set to expire in March. The sanctions included travel bans and economic restrictions.

The EU Council has also requested that the European Commission expand the blacklist of individuals it blames for the escalation of the Ukraine conflict, Mogherini said after a meeting in Brussels on Thursday.

The council, however, has refrained from imposing broader economic measures for now.

Greek Foreign Minister Nikos Kotzias said that Greece insisted on removing a passage which would have imposed new sanctions on Russia from the draft proposals at the ministers’ meeting. It also insisted that the final communiqué does not put direct blame for the Ukraine conflict on Russia

German Foreign Minister Frank-Walter Steinmeier said the EU would need to send a clear message if the rebels in eastern Ukraine launched a full-blown offensive.

"If there were large military offensives, for example with widespread assaults on Mariupol, a clear reaction would be needed," he told reporters.

The ministers were widely expected to step up sanctions against Russia following mounting pressure after last week’s deadly Mariupol attack. The EU has moved to steadily increase sanctions and restrictions against Moscow since Crimea joined Russia last spring.

Journalist Neil Clark told RT that the lack of extremely harsh measures reveals a division within the EU ranks.

“What we’ve seen tonight is the evidence of a real split. We haven’t had these measures that some people wanted. For example, some of the more anti-Russian elements have been calling for Russia to be banned from the SWIFT banking system.”

Kiev used barrier squads to prevent troops from retreating – E. Ukraine militia
The Ukrainian military employed barrier troops who fired at their fellow servicemen in order to prevent their retreat during a night battle in the country's southeast, the Defense Ministry of the Donetsk People’s Republic (DPR) said.

An injured Ukrainian soldier who surrendered to the militias said during questioning that “anti-retreat units from territorial defense battalions were used against the Ukrainian troops,” Basurin said.

According to the spokesman, 70 Ukrainian troops have surrendered to the rebels since January 9, with 11 of them capitulating in the past 24 hours.

Meanwhile, the Ukrainian Defense Ministry decided to accelerate the graduation of students from the country's military schools and universities in order to deploy them to the conflict zone in the Donetsk and Lugansk Regions, TASS reported.

“It is done to make up for the huge combat losses of officers” in the fighting in the southeast and the mass evasion of mobilization by reserve officers of the Ukrainian army, representative parent associations of Ukrainian military schools said.

According to the parents, the Defense Ministry plans to send over 2,000 under-educated lieutenants to the war-torn southeast.

Preparations for the early graduations are already underway in military schools in Kharkov, Lvov, and Poltava, they said.

Notably, graduates of Kharkov Air Force University will be sent to infantry units due to the shortage of operational planes in the Ukrainian military.

The parents stressed that they do not agree with the decision by the Defense Ministry and promised to stage rallies and block the country’s military schools and universities.

Last Tuesday, the Ukrainian military launched yet another military draft, which aims to recruit 100,000 people into the army in three stages throughout the year.

Kiev troops and Donbass militia forces are locked in renewed hostilities in southeastern Ukraine after a shaky ceasefire reached by the sides in September utterly collapsed.

Ukrainian forces launched a massive offensive in mid-January, but failed to gain any ground despite deploying tanks, artillery, and air forces.

On Saturday, a residential area in the port city of Mariupol – which has remained relatively insulated from violence throughout the majority of the conflict – was shelled.

Kiev forces and the militias have been trading blame for the incident, which has led to the deaths of at least 30 people. Another 100 have been injured in the hostilities.

The Ukraine conflict began last April when Kiev launched a military operation in the southeastern Donetsk and Lugansk regions, after they refused to recognize the country’s new, coup-imposed authorities.

The death toll in the Ukraine conflict has exceeded 5,000 people. Over 10,000 have been injured, according to UN estimates.

US Supports PACE
Suspension of Russia’s Voting Rights
According to the State Department, the US welcomes the PACE decision to extend its suspension of the Russian delegation's voting rights in that assembly until at least April 2015 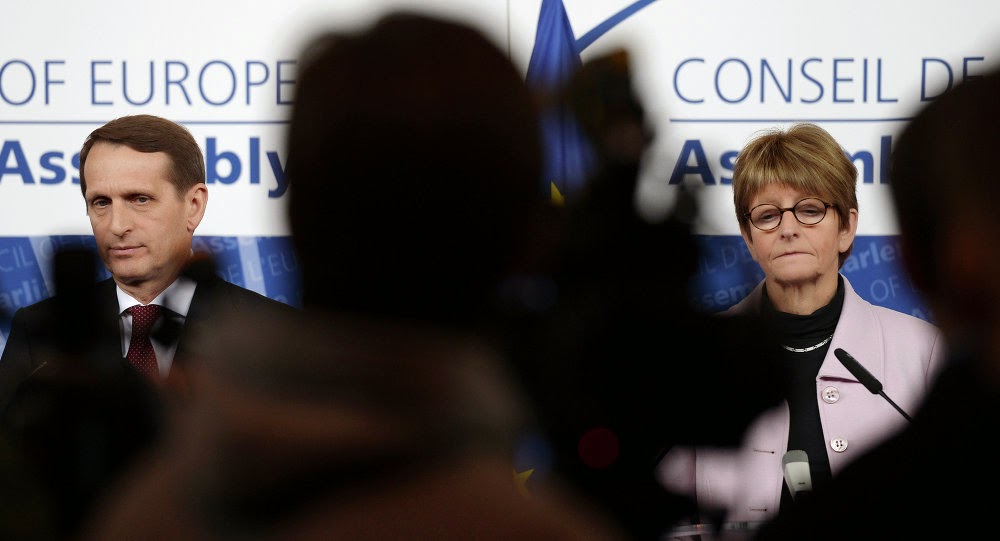 WASHINGTON, January 30 (Sputnik) — The United States welcomes the decision of the Parliamentary Assembly of the Council of Europe (PACE) to suspend Russian delegation’s voting rights in the organization, the State Department official told Sputnik.

“We welcome PACE’s January 28 decision to extend its suspension of the Russian delegation's voting rights in that assembly until at least April 2015,” the official told Sputnik Thursday.

The PACE adopted a resolution on Wednesday, depriving the Russian delegation of voting rights in the organization and cancelling its participation in the work of the Council of Europe until at least its April session, accusing Moscow of participating in the military conflict in the southeast of Ukraine, which Russia has repeatedly denied.

The state department official noted that they had seen reports about the decision of the Russian delegation to suspend its role in the organization.

“We respect the Parliamentary Assembly of the Council of Europe as an important European institution, dedicated to promoting democracy, human rights, and the rule of law,” the official said.

The PACE’s resolution stresses that the revision of the decision and other sanctions against Russia could be held during opening meetings of the April session if Moscow demonstrates substantial progress in meeting the PACE demands over Russia’s alleged role in the Ukrainian crisis, including the protection of rights of the Crimean Tatars. 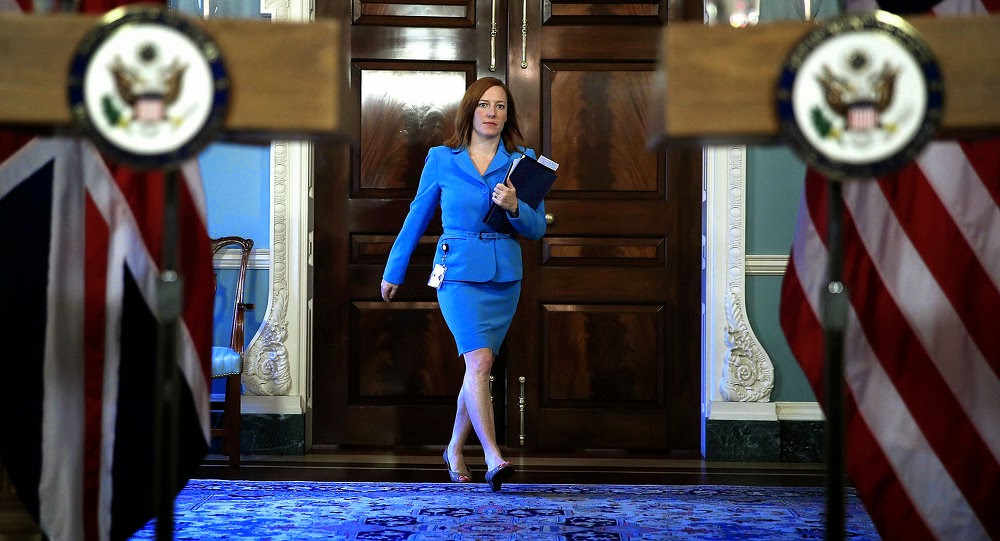 Psaki Says US Disagrees It Is in Cold War With Russia


Washington disagrees with former Soviet president Mikhail Gorbachev that the United States is in another Cold war with Russia, which might turn into a "hot" one, spokesperson for the US Department of State Jen Psaki told journalists.
Posted by seemorerocks at 18:25