I have learned, with the western prognostications of an imminent collapse of the Russian economy, that you can’t take anything for granted.

I wonder, though, when someone will start to take Brazil’s catastrophic drought and ecological collapse into account

Brazil's Economy Is On The Verge Of Total Collapse 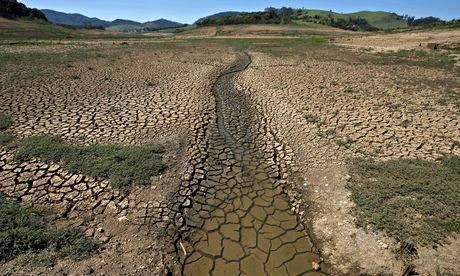 Back when the BRICs were the source of marginal global growth, the punditry couldn't stop praising them. However, in the past year, now that China's housing bubble has burst and its shadow banking system has imploded, those who remember what BRIC actually stood for are about as rare as those who recall what it means for the Fed to hike rates. Which is precisely why nobody in the mainstream financial media has commented on the absolutely abysmal economic update reported earlier today out Brazil.

We are happy to do so because today's data follows up quite well to our article from a month ago "Brazil's Economy Just Imploded" and as the earlier article on the crashing Brazilian Real hinted, things for the Brazilian economy how gone from imploding to, well, worse because not only did the twin fiscal and current account deficits rise even more, hitting a whopping 11% of GDP - the worst since August 1999, but its government debt soared to 63.4% in 2014, up from 56.7% a year ago, and the highest since at least 2006. In short - the entire economy is now on the verge of total collapse.

This is what happened in a few bullet points:
More details from Goldman:

The overall public sector fiscal deficit widened to a very high 6.7% of GDP (from 3.25% of GDP in 2013 and the highest fiscal deficit since August 1999) given the very high 6.1% of GDP net interest bill and steady erosion of the primary fiscal surplus. Given the BRL depreciation during the month, the interest on the stock of Dollar swaps issued by the central bank reached R$17.0bn (adding to the R$8.7bn accrued in November).

Lights go out, internet is cut for days, and agriculture is suffering as crisis spreads from São Paulo to Rio de Janeiro and beyond 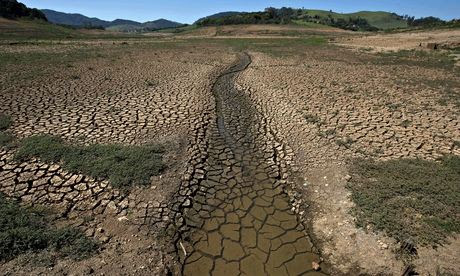 The taps have run dry and the lights have gone out across swathes of Brazil this week as the worst drought in history spreads from São Paulo to Rio de Janeiro and beyond.

More than four million people have been affected by rationing and rolling power cuts as this tropical nation discovers it can no longer rely on once abundant water supplies in a period of rising temperatures and diminishing rainfall.
The political and economic fallout for the world’s seventh biggest economy is increasingly apparent. Protesters in dry neighbourhoods have taken to the streets, coffee crops have been hit, businesses have been forced to close and peddle-boat operators have had to cease operations because lakes have dried up.
In São Paulo – the most populous city in South America and the worst hit by the drought – a year of shortages has cut water use in the city by a quarter since last January, but Jerson Kelman, the head of the main water company Sabesp, urged consumers to do more in helping the utility to “prepare for the worst”. 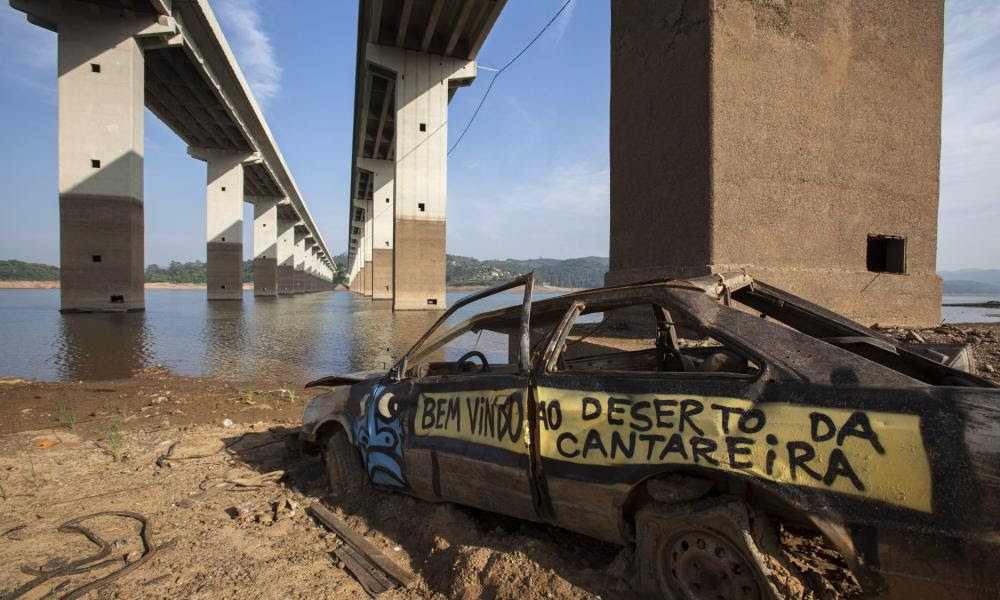 ‘Welcome to the Cantareira desert’ is written on a car which was once submerged in water, at the Atibainha dam, part of the Cantareira reservoir. Photograph: EPA

“There is a significant part of the population that is not yet aware of the seriousness of the situation and refuses to change habits,” he wrote in an op-ed published on Thursday. “They must be convinced to change their behaviour.” If the dry spell continues, he warned full-scale rationing would be introduced – something the city government denied would be necessary during last year’s elections.
At least six cities have been hit by blackouts due to weak hydroelectricity generation and high demand for air conditioning as temperatures soar over 35C. In response, utilities are burning more fossil fuels, adding to the cost of energy and greenhouse gas emissions. The government acknowledged on Thursday that Brazil is also now importing power from Argentina to try to cover the shortfall.
In São Paulo, subway trains on one line had to be halted for more than a hour. Lights and internet have also been cut in some areas for days, causing substantial inconvenience to residents and hefty losses to businesses. 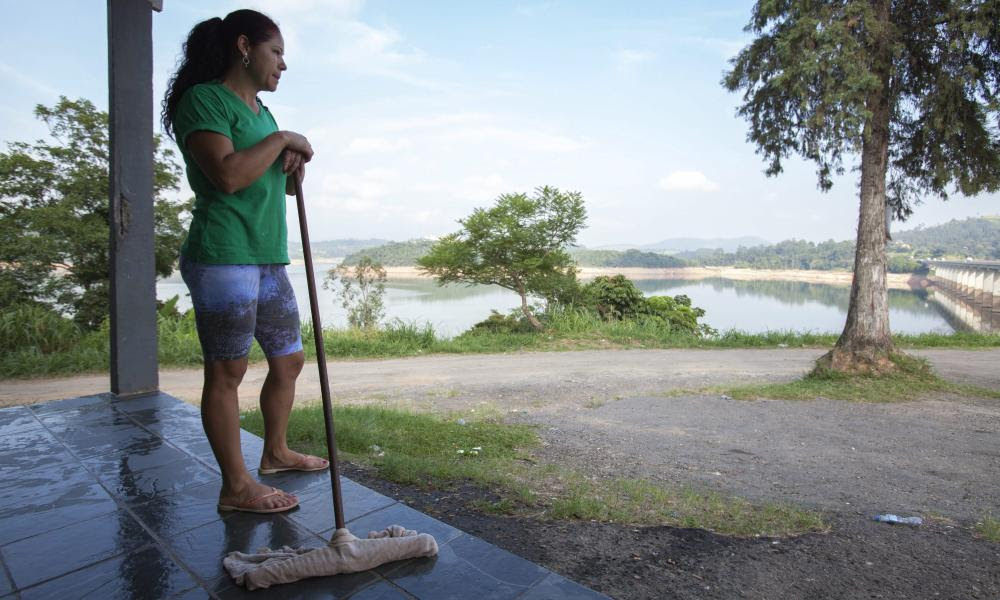 Brazilian waitress Elisabeth de Souza looks out from a patio at low levels of water, in Nazare Paulista city. Seventeen of Brazil’s 18 biggest reservoirs are at lower levels than during the last water crisis in 2001. Photograph: EPA

Agriculture is suffering with international impacts. Production of arabica coffee beans – a commodity that Brazil supplies in far greater bulk than any other country – fell 15% last year pushing up the global price of the commodity by almost half. Growers in Minas Gerais said rainfall was just 900 millimetres last year, about half its usual level. As coffee has a two-year growing cycle, the impacts will be felt next year too even if the rains return. Sugar and ethanol output has also been hit. Last week, Raizen, the country’s biggest producer, announced it will lay off 250 workers and cease production at its Bom Retiro mill for two years because of cane shortages caused by the drought.

Seventeen of the country’s 18 biggest reservoirs are at lower levels than during the last water crisis in 2001. The southeast is worst affected.
“The region has seen alarming reservoir levels since January 2014. Now in 2015, the levels are very worrying, It’s a critical situation,” Paulo Canedo, a water management specialist at the Federal University of Rio de Janeiro, said.
Although the authorities hope for relief from the skies, the current rainy season has only added to concerns. In the first three weeks of January – usually the height of the season – rainfall into the main Cantareira reservoir system was less than a quarter of the average for this period. The reservoir is now down to 5.4% of its capacity, according to government monitoring stations. 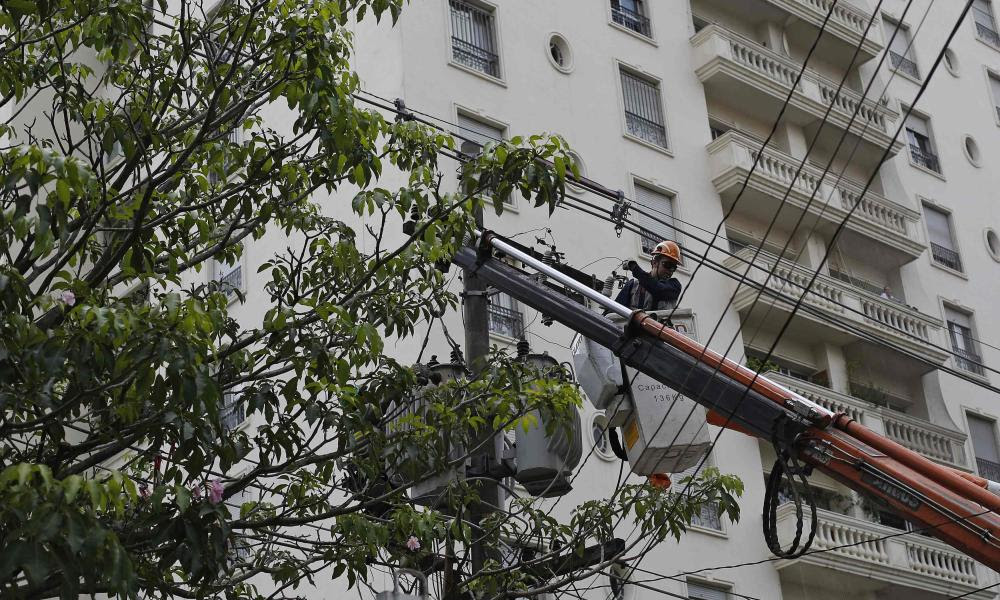 A São Paulo technician works on an electrical post during a 30-hour power outage in the Pinheiros neighbourhood of Sao Paulo. Photograph: Reuters

In Rio, the four reservoirs in the Paraiba system – which supplies the main source of tap water in Rio – are at the lowest level in history – about 1%.
The problem is spreading elsewhere. At least 93 cities have imposed rationing, affecting 3.9 million people. In the northeastern city of Olinda, authorities are cutting water supplies for three days a week.

The shortages are affecting the poor more than anyone. Short of supplies for drinking, cooking and washing, several communities have taken to the streets to protest. Groups of residents have beaten empty buckets and cans to express their frustration in the Madureira district of Rio, which has been without tap water since before Christmas. The city of Guarapari has seen two such demonstrations. The media have reflected such frustrations. “Sem Luz, Sem Agua” (Without Light, Without Water) ran a front-page headline in the Extra newspaper.
The finger of blame has been pointed at national and local governments that have responded slowly and fallen behind in upgrades of pipes, dams and transmission lines. Waste is rife. A recent central government report showed that 37% of tap water is lost due to leaky pipes, fraud and illegal access. 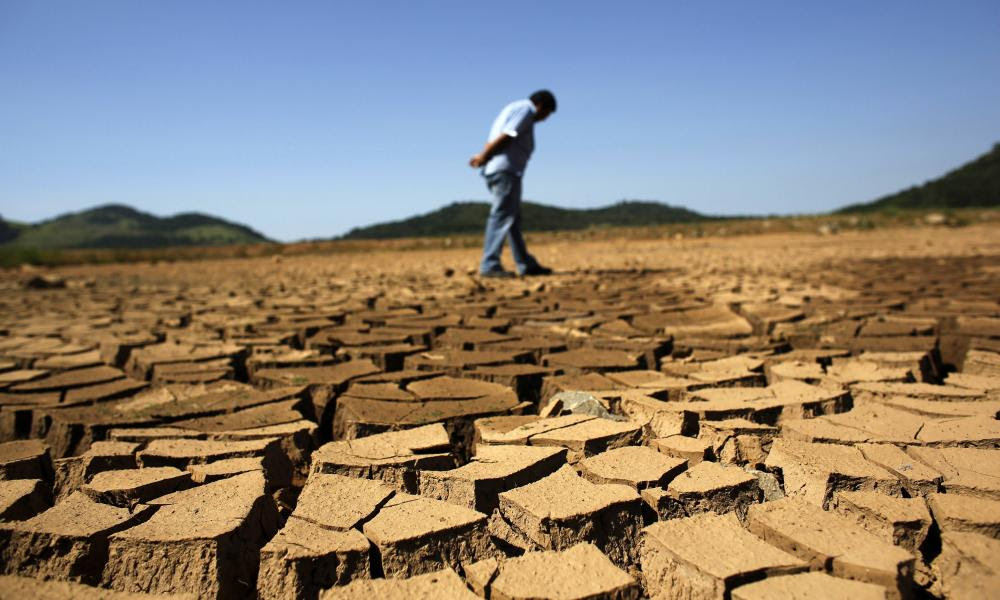 São Paulo’s water company Sabesp has begun upgrading, but with 64,000 km of old pipes, this operation is likely to take many years. In the meantime they have extended reductions in pressure, which means many homes suffer water cuts for days on end.
Water authorities counter that they are having to deal with extreme weather and rising demands from a growing and increasingly wealthy population.
“There are a lot of factors behind this – rising population density, higher average temperatures increased water consumption and global warming” said Ian Cardoso from CEDAE, the company responsible for water in the state of Rio.
Climate change, however is denied by the country’s new science minister, Aldo Rebelo, who has declared the environmental movement is “nothing less, in its geopolitical essence, than the bridgehead of imperialism”. 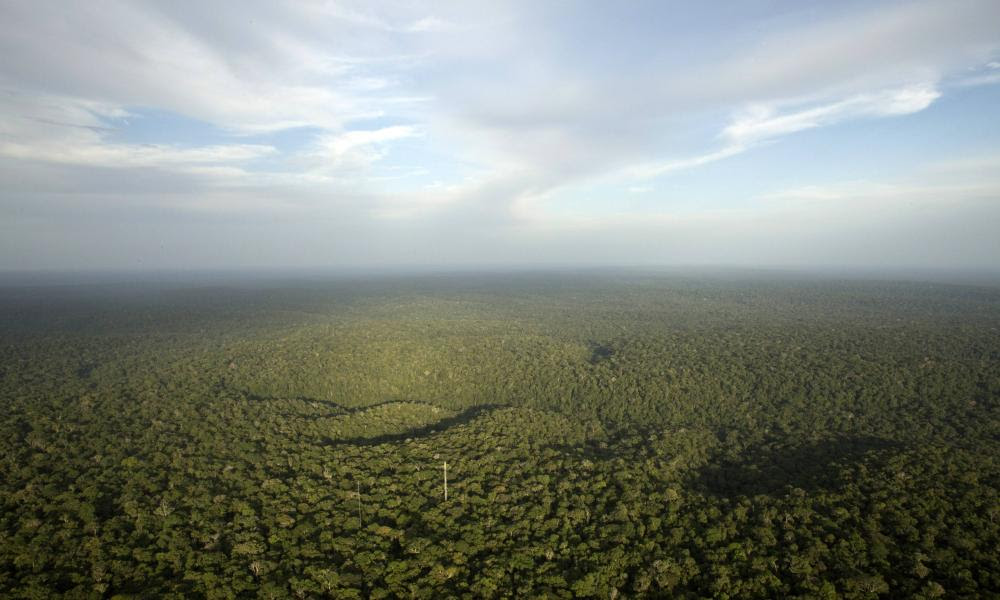 Scientists say Brazil’s weather patterns have been disrupted by the loss of Amazon rainforest. Photograph: Reuters

Scientists think otherwise. As well as global warming, they say Brazil’s weather patterns have been disrupted by the loss of Amazon rainforest and the growth of cities.
Antonio Nobre, researcher in the government’s space institute, Earth System Science Centre, told the Guardian the logging and burning of the world’s greatest forest might be connected to worsening droughts – such as the one currently plaguing São Paulo – and is likely to lead eventually to more extreme weather events.

Augusto José Pereira Filho, a hydrometeorology expert at the University of São Paulo, said the microclimate of the city was affected by population growth and urban expansion, which create a heat-island effect and reduce the amount of low cloud.