Eleanor Catton: "a culture of fear and hysteria"

"So much poison in such a small country"
Tariq Ali

"I will of course discuss the frightening swiftness with which the powerful Right move to discredit and silence those who question them, and the culture of fear and hysteria that prevails. But I will hope for better, and demand it."
--- Eleanor Catton

After all the poison released by right-wing broadcaster, Sean Plunket with his disgusting response to Eleanor Catton as a "traitor" and an "ungrateful hua", first her father, Dr Philip Catton, and now Eleanor, herself,have responded.

One would think that the contributions made by the Cattans might have launched a national discussion and some self-criticism. But not a bit of it.

The media response has only served to confirm and underline the original statements made by Eleanor Catton.  We have a country that is divided by what is probably a small minority that follows the line of Plunkett - that is fascistic and intolerant (no doubt to be heard on talkback radio and social media) - and a smaller group of people who still stand for decency and the right of intellectuals and artists to act as the conscience of the nation and to speak out against the government of the day.

Today, I can say "Je suis Eleanor". She stands for the values that I would aspire to uphold and has intuited and expressed the nature of the poison that has overtaken this small country.

Sorry Eleanor also as a sign of good faith,when you said you won the award off your own bat. How about returning the SIXTY THOUSAND DOLLARS given to you by the NZ taxpayer ,by way of a scholarship in 2011. Or will you be like the rest of your “commie green party” ilk all bullshit and jellybeans, and sucking at the trough of entitlement, as long as someone else picks up the tab.

Eleanor Catton sets up grant to give writers 'time to read'

A Statement
by Eleanor Catton 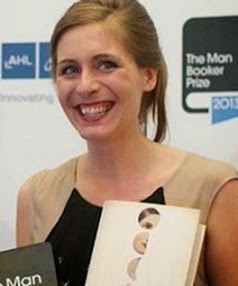 In the past twelve months I have travelled to England, Scotland, Ireland, Wales, the Netherlands, Belgium, France, Sweden, Spain, Canada, the United States, Australia, Brazil, and most recently India, attending literary festivals and helping to launch foreign-language editions of The Luminaries. To be read and received in different contexts around the world is an unbelievable privilege, one that is constantly shaping and reshaping my relationship with New Zealand, with my book, and with myself. My Maori character’s storyline took on a new significance for me after reading to First Nation elders in Winnipeg, Manitoba. I thought about the Hokitika gold rush differently after exploring the Brazilian coastal town of Paraty, where Brazilian gold, dug by slaves many miles inland, was once shipped out by the ton to Portugal. Talking about astrology in India, and about the nineteenth-century novel in Sweden, and about fiction born of philosophy in France, altered my sense of how The Luminaries fits in with other literary traditions and cultural histories around the world. I have seen also how the novel itself changes according to context: its social and sexual politics, its formal preoccupations, its attitude to history, its language, all become more or less audacious, more or less difficult, more or less successful, more or less interesting, in different parts of the world. The degree of familiarity that international readers have with New Zealand culture and history varies greatly, but one thing remains a constant: everyone I meet who has a personal connection to New Zealand will make sure to tell me all about it, sometimes at length and into a microphone of which they will not let go. I love these moments of connection and the conversation they bring. I am proud that the book is read by people whose lives do not resemble mine, and I am grateful for the opportunity to speak publicly about reading and writing, two of the things I love most. Like everybody I sometimes say things I don’t mean and mean things I don’t say, but throughout the hundreds of interviews that I have conducted since The Luminaries was published I have been conscious of my role as an ambassador—of my country, yes, but also of my gender, of my generation, and of my art.

The New Zealand mainstream media, though quick to flare up over a condensed record of remarks made last week in Jaipur, are in general altogether behind the ball: I’ve been speaking freely to foreign journalists ever since I was first published overseas, and have criticised the Key government, neo-liberal values, and our culture of anti-intellectualism many times. One reason why my remarks have not have been noticed in New Zealand until now may be that in most modern democracies a writer expressing an opinion is not considered, in itself, shocking. The truly shocking thing would be the writer who only spoke in praise of her country; who was unequivocal in gratitude and platitude; who swore fealty to her government, rather than to deep-felt values or ideals; who regarded arts funding as hush money and a part-time teaching position as an intellectual gag. I hope that that author does not exist today; but if she does, she is the one who should make the news.

In future interviews with foreign media, I will of course discuss the inflammatory, vicious, and patronising things that have been broadcast and published in New Zealand this week. I will of course discuss the frightening swiftness with which the powerful Right move to discredit and silence those who question them, and the culture of fear and hysteria that prevails. But I will hope for better, and demand it.

POSTSCRIPT: I will not be making any further comments or conducting any interviews at this time.
Posted by seemorerocks at 08:47