The oceans — where over 90% of global warming heat ends up — have literally warmed up off the charts of NOAA.

The big climate news last week was NOAA and NASA announcing that 2014 was the hottest year on record, breaking the highs of 2005 and 2010. But the bigger story got buried: Global warming has continued unabated in recent years.
Indeed, it’s not just that there not been a hiatus or pause or even slowdown in surface temperature warming (see below). The oceans, where the vast majority of human-caused global warming heat goes, have seen an acceleration in warming in recent years. As climate expert Prof. John Abraham writes in the UK Guardian,

“The oceans are warming so fast, they keep breaking scientists’ charts.”

Remember, more than 90 percent of human induced planetary warming goes into the oceans, while only 2 percent goes into the atmosphere, so small changes in ocean uptake can have huge impact on surface temperatures. That’s a key reason surface temperatures haven’t appeared to warm as fast as many had expected in the past ten years — although ocean warming has sped up, and sea level rise hasaccelerated more than we thought , and Arctic sea ice has melted much faster than the models expected, as have the great ice sheets in Greenland and Antarctica

But here’s where the media’s sometimes single-minded focus on one statistic — the hottest year on record — misses the real story from the latest scientific data and analysis. The human-caused rise in surface air temperatures never paused, never even slowed significantly. And that means we are likely headed toward a period of rapid surface temperature warming. Here’s why.

Dr. Gavin Schmidt, director of NASA’s Goddard Institute of Space Studies, tweeted last week “Is there evidence that there is a significant change of trend from 1998? (Spoiler: No.)” He attached this chart, which uses NASA’s latest data:

The latest NASA temperature data make clear that not only has there been no “pause” in surface temperature warming in the past decade and a half, there hasn’t even been a significant change in trend.

If the media can finally stop missing the forest for the trees, if they can stop missing the blatantly obvious warming trend everywhere scientists said we would see it because they only stare at a very narrow set of (generally misinterpreted) data, then they should stop repeating the myth of a hiatus or even of a global warming slowdown once and for all.

In fact, the next big story may well be that surface warming starts accelerating soon. As the lead author of one 2014 study said:

“Scientists have long suspected that extra ocean heat uptake has slowed the rise of global average temperatures, but the mechanism behind the hiatus remained unclear…. But the heat uptake is by no means permanent: when the trade wind strength returns to normal –- as it inevitably will –- our research suggests heat will quickly accumulate in the atmosphere. So global [surface] temperatures look set to rise rapidly….”

And that, combined with the current record ocean temperatures — and faster than expected warming of the ocean’s surface layer — means we can expect a continuation of the unexpectedly fast loss of Arctic sea ice and of land-locked ice in Greenland and Antarctica. And we should anticipate even more record-smashing extreme weather than we’ve had in recent years, as we throw more fuel into the an already supercharged atmosphere.

This chart of rising ocean temperatures is terrifying

This year’s biggest climate change news was that 2014 was hottest year on record. Turns out, there’s bigger news: It was also the hottest year in the oceans, which are warming so fast they’re literally breaking the NOAA’s charts.

Don’t think you mind a little jacuzzification in your ocean? You’re wrong. Warmer oceans matter because “global warming” doesn’t just mean above average air temperatures over the course of a year — it actually refers to an increase in the total amount of heat energy contained in the Earth’s systems. While air temperatures can fluctuate on any given year, they are usually matched by an increase or decrease of the amount of heat stored in the oceans (which, by the way, absorb around 90 percent of total global warming heat). To know whether the system as a whole is getting warmer or not, scientists need to take into account the temperatures of the atmosphere, land, AND oceans.

Luckily, NOAA has been tracking ocean energy data for decades, updating its charts every few months. Unluckily, the newest data shows that, on top of 2014’s record-breaking air temperatures, ocean temperatures have also increased — to put it in layman’s terms — a shit ton. The spike is so significant that NOAA will have to rescale its heat chart.

OK, people. We don’t want to sound like a broken record about the reality of climate change … and actually this time we don’t have to. This is one broken record that speaks for itself.

On January 16, two U.S. climate observing agencies jointly announced that 2014 was most likely the warmest year on record worldwide, beating previous record years such as 1998, 2005 and 2010. The announcement signaled the death knell of the argument that global warming "stopped" in 1998, which has been a popular rallying cry for climate change contrarians, from blog posts to speeches on the Senate floor.
With such high stakes, climate skeptics have been vigorously pushing back against the data, saying that the National Oceanic and Atmospheric Administration (NOAA) and NASA downplayed the uncertainties in their records and misled the public.
SEE ALSO: There is less than a 1-in-27 million chance that Earth's record hot streak is natural
Headlines like "2014: The Most Dishonest Year on Record" have been posted on climate skeptic blogs, such as Watts Up With That, and a commentator for the popular British newspaper The Daily Mail all but accused NASA of lying to the press and the public about global temperatures, despite the open discussion of uncertainties both in NASA's press materials and during a press conference with audio that is publicly accessible.
"99.97% of scientists agree there’s a 38% chance that 2014 was possibly warmer than 2010 by an infinitesimal amount" http://www.frontpagemag.com/2015/dgreenfield/while-you-freeze-remember-this-was-the-warmest-year-on-record/ …

The skeptics have focused mainly on one table in the temperature report issued on Friday, which explains the uncertainties involved in declaring 2014 the warmest year. The table would appear to indicate that 2014 only has a 38% chance of being the warmest year in NASA's data set, which isn't that convincing at first glance, and a 48% likelihood according to NOAA's data. (Each agency uses slightly different methods of calculating global average surface temperatures.)
Here is how the Daily Mail discussed the temperature record in a story published on Sunday. "The Nasa climate scientists who claimed 2014 set a new record for global warmth last night admitted they were only 38% sure this was true." The story portrayed NASA as backing off their claim that 2014 was clearly the warmest year on record according to its data set.
But NASA did no such thing.
NASA and NOAA scientists say they have not changed their tune about 2014, since the data clearly shows that it was most likely the warmest year to date since instrument records began in 1880. Furthermore, they argue that climate skeptics are twisting the meaning of uncertainty ranges and making it seem like there is far less confidence in temperature data than there actually is.
Climate science debates occur every day in the blogosphere and on cable news shows, but this particular fight about a major temperature record (and therefore, major news story) highlights the extent to which many boil down tomere contradiction and rejections of facts, rather than arguments based on competing lines of evidence.
Mashable reached out to Gavin Schmidt, the director of NASA's Goddard Institute of Space Studies (GISS), who helped make Friday's announcement and has been a target of the vigorous pushback from the climate skeptic community. Schmidt is mentioned several times in the Daily Mail story.
Schmidt told Mashable that NASA is not backtracking from its conclusion that 2014 was the warmest year in its records, and that climate skeptics — (some prefer to call them "climate deniers") — misunderstand the characterization of uncertainty that NASA provided on Friday.
Schmidt says there is, of course, some uncertainty in the global temperature data, which NASA has long acknowledged. But even when these uncertainties are considered, the data still shows that 2014 was most likely the warmest year.
"No-one disputes that there are uncertainties in estimating the global mean temperature anomaly — issues of spatial coverage, measurement practice changes over time, movement of stations etc. and we estimate that any one year's value comes with an uncertainty of about plus or minus 0.05 degrees Celsius, or 0.09 degrees Fahrenheit," Schmidt said in an email.
"2014 *is* the warmest year in the GISTEMP, NOAA and Berkeley Earth analyses," he said, referring to different data sets kept by different groups of scientists, including the one kept by his center and known as "GISTEMP."
Schmidt said there is considerably more confidence — albeit not complete certainty — that 2014 is the warmest year compared to 2010, which was the previous record-holder in GISTEMP.
Schmidt continued:

It is *likely* to have been the warmest year for the planet. Exact estimates of that likelihood are difficult to calculate (though a simple calculation we did - assuming that errors are uncorrelated from one year to another - does suggest ~38%, [which is] some one and a half times more than 2010," he said. "With the same assumptions, the chances that 2014 was warmer than 2010 is about 60%.

Schmidt said the uncertainties were "plainly and clearly discussed at the NASA/NOAA press conference on Friday." He referred to a slide in the presentation provided to reporters and the public, as well as the audio from a press conference, where the odds of 2014 being the warmest year are discussed around minute 13:47.
Deke Arndt, the head of the climate monitoring branch of the National Climatic Data Center in Asheville, North Carolina, told Mashable that his agency's characterization of uncertainty estimates were also being misconstrued by numerous bloggers and journalists.
Arndt says many journalists and skeptic bloggers in particular are making a basic mistake in interpreting what a range of uncertainty means.
"The entire community of journalists, well-meaning colleagues, bloggers would do well to remember that a "range of uncertainty" has a shape of its own," Arndt said.
An uncertainty range "does ***NOT*** mean" that each temperature within the given range is "equally likely," Arndt says.
"It resoundingly and definitively means something fundamentally different. Gavin's slide from the presentation shows this pretty beautifully," he said. 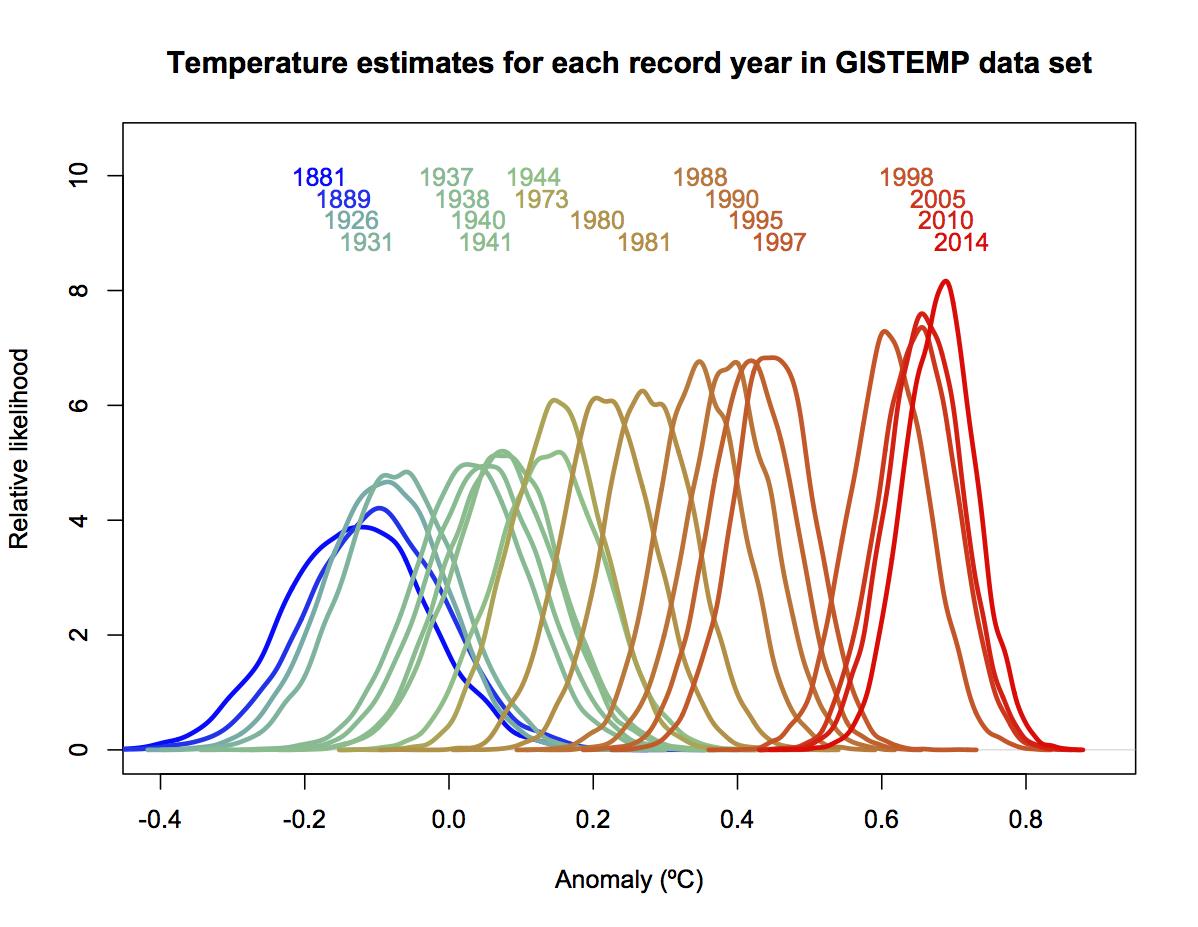 How certain are we that 2014 was a record warm year? @NASAGISS

Given the intensity of the discourse on global warming, including relatively routine annual climate announcements, it's unlikely that most skeptics will be convinced that 2014 was the warmest year. At the end of the day, the discussion about a single calendar year obscures the more important long-term trend of warming air temperatures, warming and acidifying oceans along with melting ice sheets, all of which are hallmarks of manmade global warming. Including 2014, 14 of the top 15 warmest years have all occurred since 2000.

Posted by seemorerocks at 16:58