Well, that did not take long

The dream was nice while it lasted. 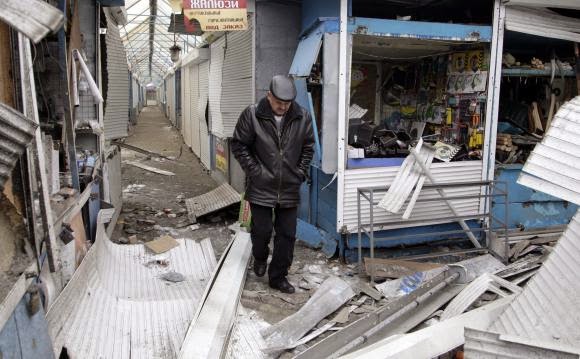 (Reuters) - European Union foreign ministers extended existing sanctions against Russia on Thursday, holding off on tighter economic measures for now but winning the support of the new left-leaning government of Greece, whose position had been in doubt.

The ministers agreed to extend until September travel bans and asset freezes imposed last year that had been due to expire. They also agreed to list the names of additional people who could be targeted with sanctions when they meet again on Feb. 9.

They dropped language, however, about drawing up "further restrictive measures" that had appeared in a pre-meeting draft. The bloc's foreign policy chief said a decision on such measures would be left to EU leaders meeting next month.

Germany said that decision would depend on the situation on the ground, with any major new rebel advance demanding tougher sanctions.

Thursday's emergency meeting had been called after rebels launched an advance last week, disavowing a five-month-old ceasefire. On Saturday, suspected rebel forces shelled the major port city of Mariupol, killing 30 people. Since then, there has been intense fighting along the frontline, although the rebels appear to have held back from an all-out assault on Mariupol.

Washington, which has coordinated sanctions moves with Brussels in the past year, said it was not planning an immediate new announcement itself.

“This is just a further sign that the actions of the last several days and weeks are absolutely unacceptable and that there will be new consequences put in place," she said.

Psaki noted that the EU and the U.S. sanctions lists had not targeted exactly the same people, firms, or sectors, and added: "We'll continue to consider others that we could add, but … I don't think there's anything to expect today.”

The run-up to the Brussels talks was dominated by Greece, whose new prime minister, Alexis Tsipras, took power on Monday and complained that his government had not been consulted before tighter sanctions were threatened.

But at the meeting, colleagues said new foreign minister Nikos Kotzias had swiftly dispelled suggestions that Greece would automatically torpedo any sanctions effort.

According to Italy's foreign minister, Kotzias announced to the meeting: "I am not a Russian puppet."

He signed up to a sharply worded statement that declared Moscow responsible for the violence in eastern Ukraine and demanded it halt its backing for the separatists.

While the Greeks did call for the decision on tighter sanctions to be delayed, they were not alone: other countries such as Italy and Austria also favored a delay, diplomats said, while Britain and the Baltic states wanted a clearer commitment to imposing new sanctions quickly.

"We are not against every sanction," Kotzias said later. "We are in the mainstream, we are not the bad boys."

German Foreign Minister Frank-Walter Steinmeier expressed frustration with the ambiguity of the Greek position before the talks: "It is no secret that the new stance of the Greek government has not made today's debate any easier," he said. After he met Kotzias in private, German officials said he was less concerned.

Britain said it had scrambled fighters after Russia flew long-range bombers near its air space, disrupting civilian aviation. It summoned the Russian ambassador for an explanation.

The incident extended a pattern that began late last year of Moscow flying warplanes close to the territory of NATO states.

A British government source said this was "a significant escalation" since Russian aircraft had previously largely stayed much further north, off Scotland.

"It was very dangerous. Civil aircraft flying to the UK had to be rerouted," the source said. "The Russians were flying with their transponders turned off so could only be seen on military radar. They haven't flown this far south before."

On the ground in eastern Ukraine, there was fighting around Debaltseve, a town of about 26,000 people on a road and rail route linking the two main rebel strongholds. It is held by government troops but surrounded on three sides by rebels. Power and water were cut off and civilians were trapped in cellars.

"People are living full-time in shelters without fresh air," said Natalia Voronkova, a volunteer helping residents escape. "Children are getting sick and there is a great need for medicine."

The rebels say they had no choice but to repudiate the ceasefire and advance, effectively restarting a war that has killed 5,000 people, because government artillery in range of their cities had been shelling civilians.

Kiev says the advance is an attempt, backed by as many as 9,000 Russian soldiers on the ground, to capture more territory. Its biggest fear now is an all-out assault on Mariupol, a government-held port of 500,000 people.

Thursday's meeting was the first big test this year of the hard-won unanimity that European officials, led by Germany, had achieved to punish their biggest energy supplier over its actions in Ukraine, which aspires to join the EU.

EU officials have told Reuters new measures could make it harder for Russian companies to refinance themselves and possibly affect Russian sovereign bonds.

The talks were also Europe's first major contact with Greece's new government, elected on a vow to repudiate the austerity economics championed by Berlin and imposed by Brussels as a condition of a bailout.

Tsipras has not made his position on Ukraine clear in public. His Syriza party has its roots in leftist movements, some of which were sympathetic to Moscow during the Cold War, and Russia's ambassador was the first foreign official Tsipras met after taking office on Monday.

But Greece has also long treasured its membership of the Western NATO alliance. It shares Orthodox Christianity with both Russia and Ukraine, and many Greeks sympathize with both countries.