More on Greece and the Troika

A calm SYRIZA and Greece said “no” to debt talks with EU-IMF troika. 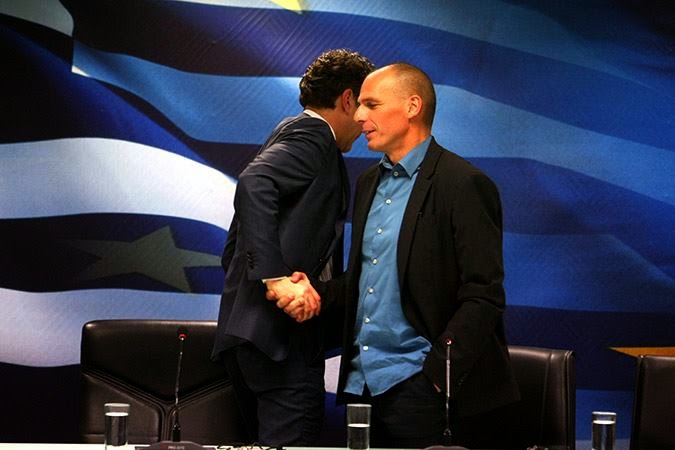 The new finance minister of Greece Yanis Varoufakis bravely opened in Athens the Pandora’s Box for the Eurozone and euro-dollar system. With just a simple “no” to the EU-IMF troika Greece is now on the way out from the Eurozone. Greece refuses to discuss the “toxic and anti-European” austerity and bailout conditions with the "troika", the combined euro-dollar team, but can talk with Eurozone leaders.

Varoufakis said that Greece does not need in the end of February another € 7 Billion tranche from the “troika” as bailout money.

His message was clear on Friday during a very chilly and short meeting with the Dutch finance minister Jeroen Dijsselbloem, who represented the troika, and walked quickly and silently out from the press conference after Varoufakis said “no”.

Instead, Greece want to discuss directly only with Eurozone leaders (read: Merkel and Germany), but observers say that Germany will not compromise. So, Greece goes out from the Eurozone.

This means that Greece might start again to print its own money (drachma), get financing e.g. from BRICS and Russia, while the PIGS (Portugal, Italy, Greece, Spain) plus Ireland might be tempted to follow the example of Greece and abandon the Eurozone.

Out from this Greek Pandora’s box might also sail a “Black Swan” (the impossible thing, until it happens) or a beginning for a financial meltdown for the Eurozone or the Western euro-dollar based EU-IMF system, if many others will follow the Greek escape. The financially mighty BRICS countries (Brazil, Russia, China, India and South Africa) are already sailing away and have established an own BRICS Bank.

The EU-IMF Troika and Greece has a completely different policy, body language and dress code. Djisselloem was symbolically like the stone-faced funeral entrepreneur dressed in a dark suit, tie and white shirt. But Varoufakis was smiling and dressed in a very casual open turquoise shirt.

This will certainly increase the appetite for the PIGS (Portugal, Italy, Greece and Spain) plus Ireland to look for escape routes from the austerity in the Eurozone - and the euro-dollar system. The PIGS might also want to print its own money and find alternative financing. Perhaps the new BRICS bank and/or Russia will give a helping hand to the PIGS. Certainly, it will also increase the appetite for Great Britain to take the final step out from the European Union, as the most likely next Prime Minister Nigel Farage has been a stron advocate for.


Greece is - like the PIGS countries - under a heavy and “toxic” austerity program imposed by the previous governments and the “troika”. But the new Greek government with Alexis Tsipras will put an end for this. Greece owes € 320 Billion and in this sum is included a bailout of € 240 Billion in 2010 from the “troika” the European Commission, International Monetary Fund (IMF) and European Central Bank (ECB).
Posted by seemorerocks at 20:55