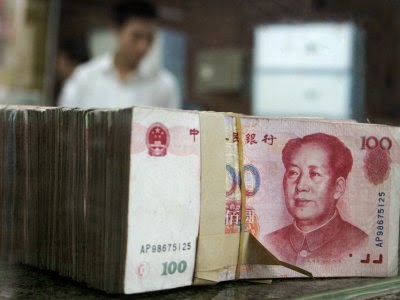 
We won't go into the specific details of China's burst housing bubble, the shady underworld of its pyramid scheme wealth-management products, the fact that any hard asset in China is rehypothecated literally a countless number of times, the nuances of its deflating shadow banking system, or even the complexities of its alleged capital controls (alleged, because as a reminder, they only exist for the common folks - the really wealthy Chinese are naturally exempt from any capital flow constraints). We will point out something even more disturbing.

Recall that China, a mercantilist, export-driven country, has a currency that is pegged to the dollar in all but name (yes, the technical peg was dropped in 2005 but since then the PBOC controls the daily moves in the strictest and tiniest of increments), a dollar which has soared in the past 6 months to levels which have prompted countless other central banks to ease in recent weeks, and even forced the Swiss National Bank out of the currency wars, waving a flag of surrender. As a result, China's exports have been crushed regardless of what fabricated and goalseeked Chinese data will have gullible observes believing.

And while the value of the local Yuan, the CNY, is set by bureaucrats and policy makers on a daily basis, and trades in a tight band around a specific, political number and thus never truly reflects the fair value of the Chinese currency, its offshore cousin, the CNH, floats and is impacted by the private demand of the Yuan. As such, the latter is far more indicative of the pressures that face the Chinese economy and what financial interests dictate should be the fair value of the domestic currency.

It is also the former, the Offshore Yuan, that overnight hit a two-year low,reaching a level not seen since September 2012.

Why do we bring this up?

Because in a notice posted on Chinese media yesterday, China is now openly scrambling and on the defensive, when it comes to an ever stronger rush by the locals to get out of their own currency and into the US dollar.  As Want China Times reports, "prompted by the robust performance of the US dollar, growing numbers of Chinese are considering converting renminbi to dollar-denominated assets." It is for those "growing numbers" that China has a polite warning: "experts are advising them to think carefully before making the move."

And this is how China is hoping to keep locals more interested in the Renminbi than in the greenback:


Chinese-language China Business News reports that yield rates for US-denominated wealth-management products range only 1.2-2.5% per annum at major domestic banks, such as China Merchants Bank, Bank of Shanghai, and Farmers Bank of China, a far cry from renminbi-denominated products, such as deposits at Yu'e bao, the monetary fund under internet giant Alibaba, which hit 4.4%.

Interest rates for one-year timed deposits at major domestic banks now stand at 3.3%, much higher than the mere 0.95% for corresponding US-dollar deposits.

Investors in US dollar-denominated assets have the option of subscribing to the existing 10-odd QDII (qualified domestic institutional investor) funds, such as the Guangfa Fund, launched by the Bank of Communications, focusing on investments in US realty, which often generates higher returns but also entails higher risks.

In other words, China is pitching an investment in Ponzi schemes as a higher-yielding alternative than putting one's money in an appreciating dollar. Which, in retrospect is backed by another Ponzi scheme, so at least superficially it does makes sense. The bigger problem is that it would appear that the local citizens have figured out that in a time when the US Dollar is ascendent, the knock on effects on the Chinese economy are quite dangerous, and from the collapse in exports, to the imploding banks, to the halt in commerce and urbanization, the dollar suddenly looks like a far better option especially when the local currency is unbacked by anything: not gold, not crude, nothing.

The punchline from the Chinese media:


A forex trader said that despite the recent plunge in the value of renminbi against the greenback, the exchange rate of the former will fluctuate moderately at most, as the renminbi is essentially pegged to the greenback in value, according to China Business News.

Yes... unless China does indeed proceed to become merely the latest in a long chain of countries - main export competitors Japan, the Eurozone and Korea included - who have already devalued against the USD: something numerous experts have quietly voiced in recent weekly is not only possible by just a matter of time.

And why not: after all with China's economy dramatically slowing, it is virtually inevitable that China will have to devalue to spur its export-driven economy.

Of course, the flipside is that the resultant surge of capital flows in the USD assure that the US economy, with its currency at never before seen heights, grinds to a halt, the stock market crashes, and the US export industry falls like dominoes. In many ways, this would be reminiscent of the short-term pain Greece would suffer if its exits the Eurozone, the financial collapse that would follow and wipe out the legacy wealth but set the country on strong footing with its own currency going forward and a way to fix imbalances not only by cutting wages and welfare, but through its own currency as well.

And finally, even if China does devalue now, it knows very well that it has a currency put later: after all those thousands of tons of undisclosed gold that the PBOC has accumulated "secretly" since 2009 can very easily be used to backstop a new-regime currency, once which would redefine the global world order, and serve as the world's reserve.

When will all this happen? Nobody knows, however it is clear that with every passing day that the stronger dollar forces China's exporters into an ever more untenable position, the D(evaluation)- day comes loser.

Unless, of course, the Fed capitulates in the meantime, and crushes all hope of a rate hike or even proceeds with more quantitative easing or even NIRP. In that case all bets are off, and so is the Fed's credibility, leading to an even more... exciting world.