In Denmark You Are Now Paid To Take Out A Mortgage 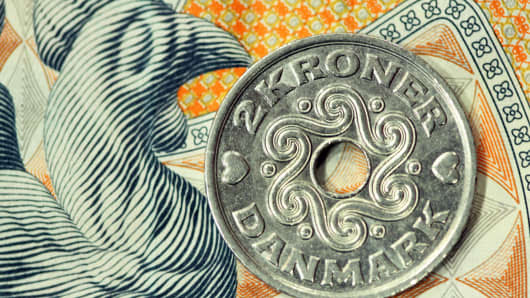 With NIRP raging in the Eurozone and over €1.5 trillion in European government bonds trading with negative yields, many were wondering when any of this perverted bond generosity will spill over to other debtors, not just Europe's insolvent governments (who can only print negative interest debt because of the ECB's backstop that it will buy any piece of garbage for sale in the doomed monetary union). In fact just earlier today we, rhetorically, asked a logical - in as much as nothing is logical in the new normal - question:


Who will offer the first negative rate mortgage

Little did we know that just minutes after our tweet, we would learn that at least one place is already paying homeowners to take out a mortgage. That's right - the negative rate mortgage is now a reality.

Thanks of Mario Draghi's generosity with "other generations' slavery", and following 3 consecutive rate cuts by the Danish Central Bank, a local bank - Nordea Credit - is now offering a mortgage with a negative interest rate! This means, according to DR.dk, that Nordea have had to pay instead of charging interest to to a handful of customers, says housing economist at Nordea Kredit, Lise Nytoft Bergmann for Finance.


The interest rate has balanced around 0 in a level between minus 0.03 percent plus 0.03 percent. Most have paid a modest positive interest rate, but there are so few who have had a negative rate. It is quite an unusual situation, says Lise Nytoft Bergmann.

It is residential customers who have chosen to stick with F1-loan that now benefit from the negative interest rate. F1 loan form has otherwise been strong returns in recent years in favor of fixed interest loan.

Although interest rates are negative, it is not something that can be felt by customers as contributions and other costs continue to be paid. In turn, interest will be deducted from the contribution.

Precisely because it is an unusual situation, Nordea Kredit's IT systems are not geared to the situation when the computers are only used to collect interest.

Lise Nytoft Bergmann says that there is no cause for concern, and that the new situation can be handled, "but sometimes we have to use duct tape and paste."


This is just the beginning: according the Danish media outlet, as a result of variable-refinancing, as recently as a week from now "a greater share of customers could have a negative rate."


Mortgage Denmark is one of the mortgage banks, where F1 rate also is close to zero, and here you are very excited about the upcoming negotiations, says Christian Hilligsøe Heinig, chief economist of the Mortgage Denmark.

We have an auction just around the corner and it is very exciting to see how interest rates are going. We can go and get negative interest rates, says Christian Hilligsøe Heinig to JP Financial.


And just like that, first in Denmark, and soon everywhere else in Europe, a situation has now emerged where savers who pay the bank to hold their cash courtesy of negative deposit rates, are directly funding the negative interest rate paid to those who wish to take out debt. In fact, the more debt the greater the saver-subsidized windfall.

That all this will end in blood and a lot of tears is clear to anyone but the most tenured economists, however in the meantime, we can't wait to take advantage of the humorous opportunities that Europe (and soon Japan and the US) will provide in the coming months, as spending profligacy will be directly subsidized and funded by the insolvent monetary system, while responsible behavior and well-paid labor will be punished, first with negative rates and soon thereafter: with threats, both theoretical and practical, of bodily harm.

It Will Now Cost You 0.5% To Save Money In Denmark: Danish Central Bank Cuts Rates For Third Time In Two Weeks

When the Danish Central Bank cut rates precisely a week ago, going from NIRP to NIRPer, and pushing the deposit rate from -0.2% to -0.35%, the sense of desperation was already in the air: after all this was already the second rate cut by the Denmark's monetary authority in one week, all in the hope of preserving the peg to the DEK to the EUR. That sense of desperation just hit a fever pitch moments ago, when the Dutch central bank just went NIRPest, and cut rates across the board yet again, and made it even more costly to save money in the north European country, where the Deposit rate has just been cut from -0.35% to -0.5%!


Effective from 30 January 2015, Danmarks Nationalbank's interest rate on certificates of deposit is reduced by 0.15 percentage point to -0.50 per cent. The lending rate, the discount rate and the current account rate are unchanged.

Certificate of deposit rate: -0.50 per cent

Ironically, all this will achieve is delay the Peg breach by a few weeks. If anything, the Danish central bank is merely confirming that while it hasn't sounded an all out retreat from currency wars, like the Swiss and Singapore banks did recently, it is in furious retreat and it is only a matter 0f time at this point.