“We often say: Ukrainian Army, Ukrainian Army. But who is really fighting there? There are, indeed, partially official units of armed forces, but largely there are the so-called ‘volunteer nationalist battalions’,” said Putin.

He added that the intention of Ukrainian troops is connected with “achieving the geopolitical goals of restraining Russia.” Putin was addressing students in the city of St. Petersburg.

READ MORE: Ukraine military 'to boost forces in the east' as Poroshenko calls to stick to Minsk accord

According to Putin, the Ukrainian army “is not an army, but a foreign legion, in this case a foreign NATO legion, which, of course, doesn’t pursue the national interests of Ukraine.”

Kiev has been reluctant to find political solutions to the crisis in eastern Ukraine and only used the ceasefire to regroup its forces, the president stressed.
“Unfortunately official Kiev authorities refuse to follow the path of a peaceful solution. They don’t want to resolve [the crisis] using political tools,” Putin said, adding that first Kiev authorities had first used law enforcement, then security services and then the army in the region.

“It is essentially a civil war [in Ukraine]. In my view, many in Ukraine already understand this,” Putin dded.

"The statement that there is a NATO legion in Ukraine is nonsense. There is no NATO legion,"Stoltenberg told reporters.

Already tense situation in eastern Ukraine gone downhill in past 2 weeks. The escalation of violence came after a controversial incident at a Kiev-controlled checkpoint near the town of Volnovakha, where 12 passengers were killed on January 13. Local residents inspect their home, which was damaged by shelling in the village of Sartan, near Mariupol (Reuters / Nikolay Ryabchenko)

Kiev and the militia blamed each other for the incident.
Following escalation, Kiev ordered “massive fire" on militia-held regions on January 18. The self-proclaimed Donetsk republic’s leader accused Kiev of trying to restart the war.

Violent confrontation between Ukrainian army troops and rebels reached its climax last week, when Mariupol in the
Donetsk Region was shelled. At least 30 people were killed and over 100 wounded.
Kiev and militia troops traded blame, with rebels insisting they didn’t’ have weapons close enough to the city to carry out such a deadly attack. Western countries reiterated accusations of Russia backing the rebel forces, and so being partly responsible for violations of the Minsk agreement. They called for more sanctions against Moscow.
On Monday, US President Barack Obama promised the United States would examine options to "ratchet up the pressure on Russia" on the Ukraine issue.
At the same time, US Treasury Secretary Jack Lew said Washington has "more tools" available to increase pressure on Russia.

"I think we have seen that the sanctions work to create real stress in the economy. We have more tools. I am not today going to enumerate what the tools are but we have more tools," Lew told a news conference in Brussels.

Polish President Bronislaw Komorowski also called on the EU to consider imposing tougher sanctions on Moscow, saying: "The response of the Western world should be very firm.”

Germany's Foreign Minister Frank-Walter Steinmeier also hinted at further restrictions, adding that "an attack or a broad offensive on Mariupol would be a qualitative change in the situation to which we would have to react.”

“Instead of stepping up the pressure on those who refuse to start a dialogue and to solve the conflict in a peaceful way, we hear they want to resume this economic blackmail against Russia,” Peskov noted in his statement.

The ministry also hinted that closer examination of the footage actually points to the fact that Ukraine forces were responsible for the bombardment.
The video was published on the internet on Sunday, one day after shelling in the eastern Ukrainian port city killed at least 30 people and left another 100 injured.
“The SBU needed 24 hours to force this story out of a man, which – as we see in the clip – is read by the detainee from a piece of paper located left to the screen,” the statement by the Russian Defense Ministry said.

In the video, the person – identified by the SBU as Valery Kirsanov – says he has been working as a spotter for the self-defense forces of the Donetsk People’s Republic since being contacted by a rebel unit commander nicknamed Pepel (“Ash”) two weeks ago.

During this period, the man in the video said that several checkpoints of the Ukrainian military were shelled after he sent their coordinates via text messages to the rebels. According to Kirsanov, Saturday’s shelling was also performed according to his sighting, but the militia’s artillery missed the checkpoint on Taganrogskay Street, which they were aiming for.

“They were supposed to ‘do the work’ during the night, but they did it in the morning, at around 8:00 AM. I went to see how things were there and told Pepel that they were a kilometer off the mark,” he said in the video.

There is also a cut closer to the end of the footage, after which the detainee adds that Pepel is actually“an officer of the Russian army in charge of an artillery battalion” which shelled Mariupol, located in the Donetsk region, on Saturday.

The Russian Defense Ministry stressed that “the knowledge of the nicknames of his contacts (Pepel and another rebel commander he mentioned), their passport details, citizenship, and the composition of their subordinate forces and weaponry makes Kirsanov at least a resident agent, not some appointed spotter.”
“This whole story would be more in place in a spy novel,” the statement said.


The ministry also pointed out “a notable inconsistency, which the SBU...neglected for some reason” while crafting its video.
“At 1:42 of his ‘confession’ video, Kirsanov said that he sent his contacts the coordinates of a stationary checkpoint of Ukrainian troops in Vinogradnoe village...At 2:22 of the clip, when answering the question: ‘From where did the fire come?’ Kirsanov said with confidence: ‘From the direction of Vinogradnoe.’ In other words, from the direction where the Ukrainian military checkpoint was stationed,” the statement said.

The Defense Ministry also pointed out that Vinogradnoe is located 3.5 kilometers away from the shelled residential areas in Mariupol, which is just about the minimum range of Grad missile launchers, which were allegedly used in Saturday’s bombardment.

“Further comments on this fake – or as one may call it a 'self-disclosure session' – by the SBU would be excessive,” the statement concluded.

Kiev’s troops and Donbass militia forces are locked in renewed hostilities in southeastern Ukraine after a shaky ceasefire reached by the sides in September utterly collapsed.

The Ukrainian military launched a massive offensive in mid-January, but failed to gain ground despite employing tanks, artillery, and aviation.

The Ukrainian conflict began last April when Kiev launched a military operation in the southeastern Donetsk and Lugansk regions, after the regions refused to recognize the country’s new coup-imposed authorities.

The death toll in the Ukraine conflict has exceeded 5,000 people. Over 10,000 have been injured, according to UN estimates.

Jen Psaki lies for a living 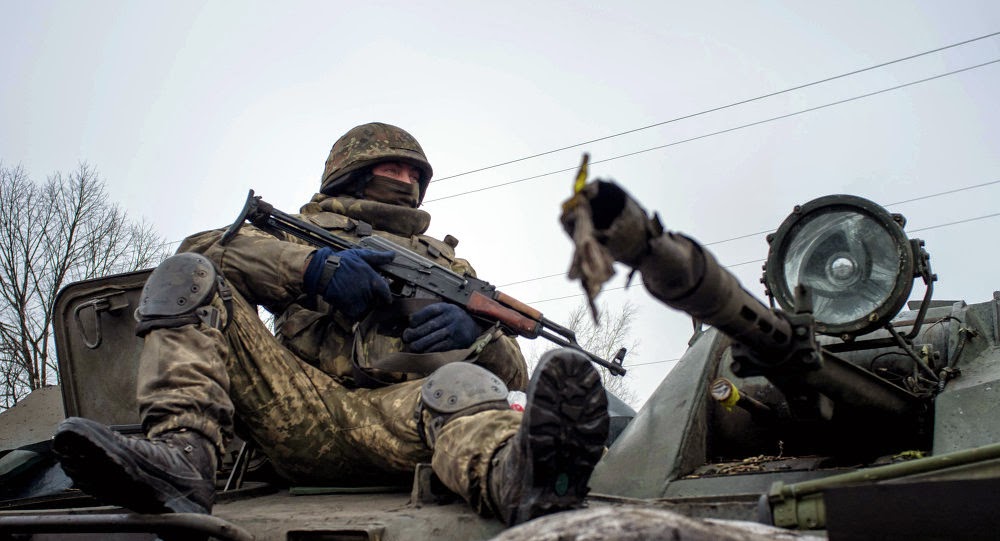 WASHINGTON, January 27 (Sputnik) — Allegations that US private army or mercenaries operate with the Kiev government are incorrect, US State Department spokesperson Jen Psaki said on Monday during a press briefing.

“There have been rumors, which my understanding they are false,” Psaki told journalists when asked about US private army operating in Ukraine, referring to recent videos depicting English native speakers patrolling streets of Mariupol, a city in the southeast of Ukraine.

The first uniformed armed man speaking English was accidently recorded on the video by the Mariupol News Service. He refused to comment on the correspondent’s question and quickly went away with the words “Out of my face, out of my face, please.”

Ukrainian servicemen get inside armoured personnel carriers (APC) during a ceremony to hand over weapons, military equipment and aircraft to the army at a firing range outside Zhytomyr January 5, 2015

The other video depicts a uniformed man scouting the area for unexploded ordnance, following Saturday’s heavy shelling attack, which claimed at least 30 lives. The videos raised questions about the alleged involvement of foreign military contractors in the Ukrainian conflict.

“There are no [US] troops operating [in Ukraine], there was also an accusation that there is a NATO legion in Ukraine…there have been a range of rumors out there which are inaccurate,” Psaki underscored.

Currently, the US officials are claiming that they are providing exclusively non-lethal support to Ukraine, as well as military advice. Last Tuesday the US Ambassador to Ukraine announced that the US Congress allocated $75 million to support Ukrainian defense sector in 2015, in addition to $119 million it had already provided in 2014 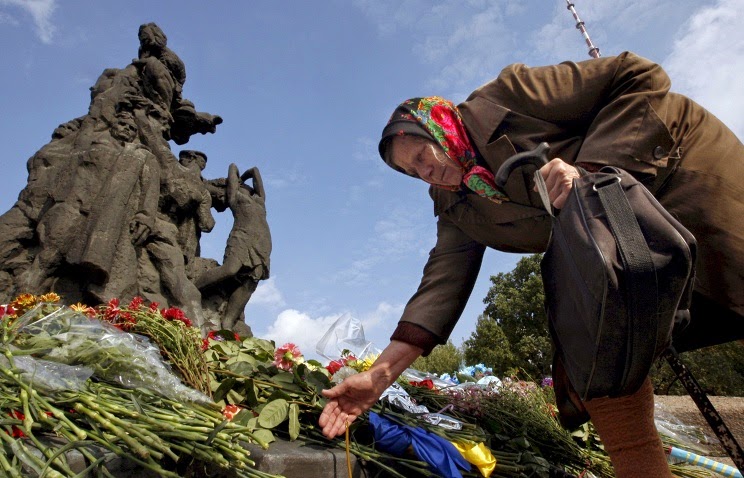 It is not the first time that Ukraine’s nationalist forces are attacking religious holy sites with full appeasement on the part of the Kiev authorities, the Foreign Ministry says 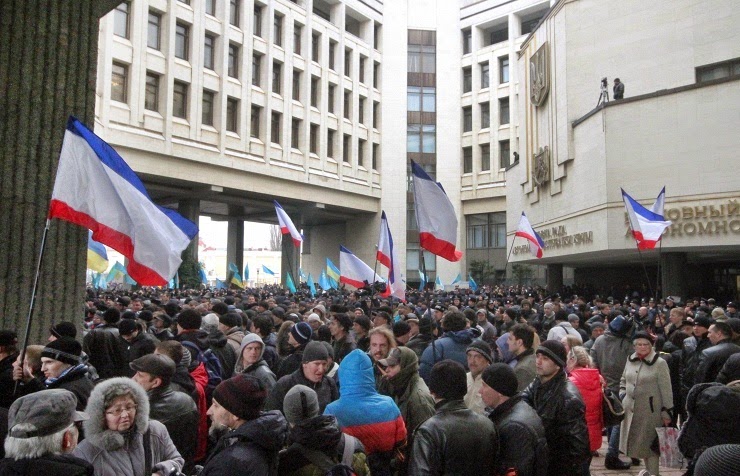 
“A channel’s representative has suddenly blamed the Crimean authorities for standing behind the search raid," Dmitry Polonsky, Crimea’s vice-premier, said 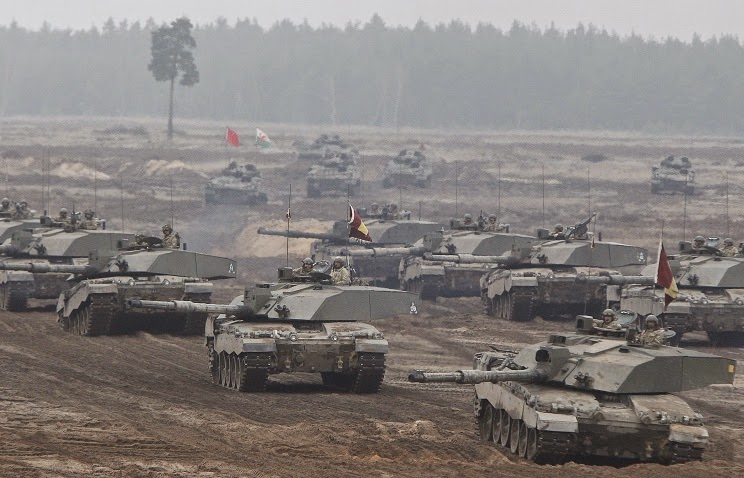 As a military political organization, NATO will not supply lethal weapons to Ukraine