Key wants TPPA ready within six months
Prime Minister John Key, in Switzerland for the World Economic Forum, says progress has been made there on the Trans-Pacific Partnership Agreement (TPPA). 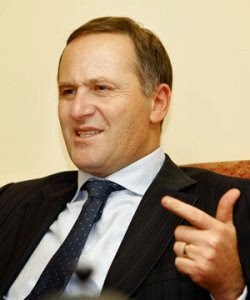 He now hopes the negotiations will be finished within six months.

Mr Key has joined around 40 world leaders in the ski resort town of Davos, including German Chancellor Angela Merkel and French President Francoise Hollande. He's had a meeting Dutch Prime Minister Mark Rutte, and several more are in the pipeline, including meetings with the Prime Ministers of Sweden, Ireland and Luxembourg.

He has also had an informal meeting with a US trade representative, where the TPPA was discussed.

"I was walking along and I think he saw me and came over and said hello," says Mr Key.

"Mike Froman is the person that President Obama charges with the responsibility of completing the Trans-Pacific Partnership, the free-trade agreement between New Zealand, the US and Japan and others. You can see from President Obama's State of the Union speech he's quite clear, I think, that he wants to complete a deal. That was certainly what Mike Froman was saying to me.

"There's a lot of positive thoughts going on. I'm feeling a lot more confident we might get a deal completed. It's critically important really we get things done arguably in the next six months."

The Prime Minister is also giving several talks at the forum tomorrow. He'll be speaking alongside the former Prime Minister of New Zealand, Helen Clark. This morning he gave a speech to around 25 business leaders from across the globe about New Zealand's place in the world.

Posted by seemorerocks at 21:35