Ukraine's Government Is Losing Its War. Here Is Why: 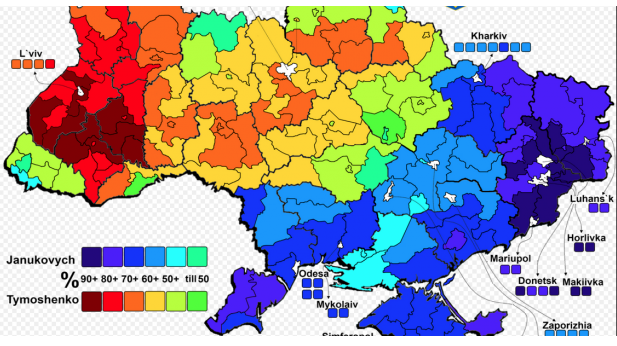 
On January 27th, Ukraine’s Ministry of Defense headlined “Militants Continue to Suffer Losses,” and reported that four helicopters, and other weapons of the “militants,” were destroyed in battle, but no evidence was given to support the assertion.

Just two days prior, the (also pro-Government) Kiev Post had, in fact, bannered “Ukraine Hides Devastating Losses as Russia-Backed Fighters Surge Forward,” and reported “Ukraine’s worst-kept secret — that the Ukrainian army is drastically understating its casualties.” After detailing, there, what seems to be outrageous unconcern by the Government, for the welfare of troops it’s sending into battle (even by jamming battlefield-injured soldiers into regular civilian hospitals, which aren’t equipped to handle their injuries), this report ends with a doctor saying, “It’s bad everywhere. Yes, the soldiers are still standing at their positions ready to fight. But we don’t see any help coming for them.”

The Ukrainian news agency RIAN headlined on January 26th, “Mobilization in Dnipropetrovsk Almost Drowned,” and reported, “In Dnipropetrovsk region [which is run by the U.S. White House’s friend, the Ukrainian-Swiss-Israeli billionaire Ihor Kolomoysky, whose longstanding personal mercenary army has, alone, more than 5,000 fighters], thousands of men are hiding from the draft. Enforcement officers recognize that accomplishing their task will be very difficult.” More than 2,000 people there who were drafted “did not show up, they evaporated.”

Consequently, the Government is dragooning-in, or “ambushing” (as the article says), virtually anyone who seeks help from the Government, “mobilizing the unemployed” and other “desperate” people. “Military enlistment offices complain” that some draftees are too sick to be able to fight at all.

Also on January 26th, the Fort Russ blog bannered, “Azov Commander Freaks Out, Calls the War ‘Lost’. Blames Everybody,” and reported that, “Ukrainian politicians and generals ‘already lost the war,’ and ‘the West did not help.’ That’s the core of the statement by Azov punitive [meaning: to ‘punish’ the residents in the anti-Government region, for their not supporting the Government] battalion commander’s, and currently also Rada [Parliament] Deputy’s, Andrey Biletsky, in his ‘Address to the Nation.’” According to Biletsky, after the fictitious “thousands of supposedly killed enemies and burned out tanks, the wake-up can be very painful,” because of disappointment felt from the Government’s lies.

RIAN news headlined on January 27th, “The Situation at the Front and Riots Against the Mobilization,” and Andrew Vajra, of the news-site “Alternative,” quoted Biletsky there, as saying, “We were not prepared for the current confrontation.”

Whereas Ukrainian conscript soldiers are not eager to risk their lives in order to impose the current Ukrainian Government (which had resulted from Obama’s coup in Ukraine in February 2014), upon the residents in Ukraine’s Donbass region, which had voted 90% for the man whom Obama overthrew, the residents who still survive there are very eager not to allow this new regime to kill them; and, so, the motivation on the part of the people whom Obama’s forces are trying to kill, is vastly higher than is the motivation on the part of conscript troops, from the rest of Ukraine, to kill them. The only troops who are that eager to kill them are supporters of Ukraine’s two nazi (or racist-fascist) parties, the “Freedom” (renamed by the CIA from their former “Social Nationalist”) and the Right Sector, Parties. Those parties have always gotten only a small percentage of the popular vote in Ukraine, though Obama’s people haveplaced them into power. Once in power, they passed laws to lock-in that power.

The Ukrainian Government’s problem is that there just aren’t enough nazis, and there’s also not enough money, to do the amounts of killing that need to be done in order to enable Obama’s Ukrainian regime to retain the land in Donbass while eliminating the people there. The 90% of those people who had voted for the man (Viktor Yanukovych) whom Obamaoverthrew are far more numerous, and far more motivated, than are the vast majority of Ukraine’s soldiers.

America’s and Ukraine’s oligarchs cannot come up with the money to finish the job, but Obama’s big financial backer George Soros is now globetrotting in order to convince taxpayers throughout the West to provide the money to finish it, and the amount he’s coming up with as being necessary for the job is between twenty and fifty billion dollars. His entreaties appear to be falling upon deaf ears.

And that’s the real reason why Obama’s war in Ukraine is failing: there’s just not enoughblood-lust for the task, either in Ukraine, or in “the West.”

Either outcome will be embarrassing for him. But perhaps it won’t be quite as embarrassing for him as was his predecessor’s embarrassment regarding the Iraq War. (Of course, Republicans would be in their glory then, by saying “Obama lost Ukraine,” even though it was actually Obama who had seized Ukraine, to begin with — and Republicans would never criticize a President for doing a thing like that: it’s the sort of thing that Republicans are expected to do.)

On the other hand, it might turn out to be even more embarrassing than that for Obama, if he should happen to decide to go all the way here, and to push on for a nuclear war against Russia.

As regards the Ukrainian Government itself, they were placed into power by Obama’s action of coup, followed by this Ukrainian Government’s actions removing the Donbass residents from their electorate; and, so, the current members of the Rada, and of the Ukrainian Administration, cannot blame Obama; they are instead blaming Vladimir Putin and Russia — the country that Obama (like George Soros and so many other American aristocrats) hates, and that not merely the people whom Obama placed into power in Ukraine hate.

Furthermore, German Economic News reported that this action by the Rada had been passed by “271 of 289 deputies present,” and that it could “have international legal consequences.”GEN’s report also said that Ukraine’s leaders claim they now “urgently need new loans” from the EU, because, otherwise, Ukraine’s existing loans will go into default. The reader-comments to that news-report at GEN’s website seem to be negative on that request, and to be far more inclined to view Ukraine’s Government as nazi than as Ukraine’s being the victim of Russia or any other country, and least of all as being a victim of the EU’s own taxpayers, who have already given plenty to the Ukrainian Government, and who would become the people bearing the burden of those new ‘loans,’ which would be going to the very back of Ukraine’s long line of creditors, if Ukraine goes bankrupt, as is widely expected soon to happen. In other words: there would seem to be little public support in Germany, for giving Ukraine yet more money. If the EU’s leaders do decide to comply with Ukraine’s urgent request, then the EU will have even less public support in Germany than it currently does. The EU is therefore likely to turn down the request, so as not to place even further into jeopardy the EU’s own continued existence.

And, obviously, unless Ukraine gets the further ‘loans’ to prosecute its war against the residents in Donbass, Ukraine won’t even possibly be able to win this war.
So, that’s the Ukrainian Government’s predicament, regarding this war

Posted by seemorerocks at 16:02