This was completely unsurprising. As I have said previously, these credit downgrades are political not economic in the rationale behind them. They do come at a cost of perhaps $20-30 billion in earlier repayments, but there it is. Russia needs to hurry up and sort out its own financial markets and work with the Chinese to create its own credit rating agencies. Borrowing excessively in the capital markets and using the credit rating agencies of countries politically hostile to Russia is a bad idea, as we can now see.

What is particularly ironic about this decision is that it has come on the same day as confirmation that industrial production in Russia rose by substantially more in the supposed crisis month of December than anyone had expected. See Jon Hellevig's and Elliott's Auckland's pages for more details.

“The downgrade reflects our view that Russia's monetary policy flexibility has become more limited and its economic growth prospects have weakened. We also see a heightened risk that external and fiscal buffers will deteriorate due to rising external pressures and increased government support to the economy,” said a statement from the agency.
The ruble fell from 66.3 to over 69 per dollar. As it experienced downward pressure through the early hours of Monday, the Russian currency has now fallen by over 8 percent since the previous trading day. 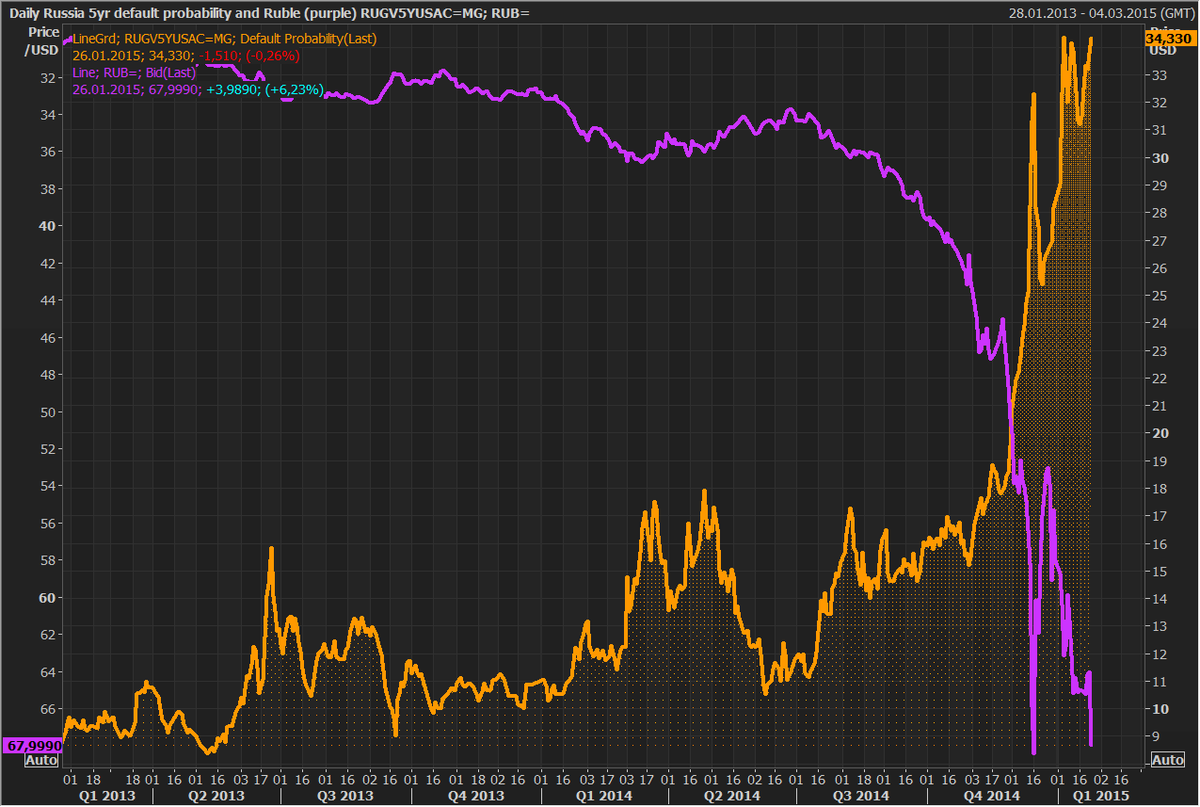 
Russia's Finance minister said S & P's move was "overly pessimistic, and did not take into account the strengths of the Russian economy." Among its advantages he listed Russia's considerable foreign currency reserves, a positive balance of payments, and low levels of state debt. The official urged investors to "avoid dramatizing the situation."

New war tactics: you can do more damage to a country downgrading their credit rating than bombing a major city.


In contrast, in their breakdown, S&P analysts drew up a bleak future for Russia’s economy, which is predicted to shrink this year.

It blames both the "structural problems" of Russia’s economy, and the cycle of Western sanctions and counter-sanctions imposed since the succession of Crimea from Ukraine last March.

“We see this muted projected growth partly as a legacy of a secular economic slowdown that had already begun before the recent developments in the Ukraine. It also reflects a lack of external financing due to the introduction of economic sanctions and the sharp decline in oil prices.”
The fall in credit ratings makes it more difficult for Russia to borrow money on the international markets, and may have wider ramifications for its financial system. Russian companies, both state-owned and otherwise, may struggle to repay their loans, while many investors without a remit to speculate in risky conditions may withdraw from the Moscow stock markets.

FYI, #S&P cut #Russia rating to junk. If other agencies follow, would shrink universe of buyers & could force sales by some existing holders


The government may have to step in to rescue key national corporations. The Russian Central Bank has promised to inject 1.2 trillion rubles (US$18 billion) into the country’s banking system to steer away from a full-fledged crisis.

“Credit ratings are meaningless in a situation when the international capital markets are closed off to Russian companies,” said a statement from oil and gas giant Rosneft, one of the companies targeted by sectoral sanctions adopted against Russia in the summer over the escalation of the conflict in Ukraine. Majority state-owned Rosneft insisted it was feeling “confident.”

Russia’s Central Bank announced last week that in its internal assessments it would ignore any ratings issued by the Big Three Western ratings agencies – Standard & Poor’s, Fitch, and Moody’s – that were issued after March 2014.
It said that all credit ratings given to Russian companies and banks will now be at the discretion of the board of directors of the bank. The regulator will assess whether or not the ratings made after March are accurate. The decision came after Fitch and Moody’s had downgraded Russia's sovereign debt to just above junk status.

Moscow and Beijing announced their intention to create a rival rating agency to S&P’s, Moody’s, and Fitch later this year. The two countries are already partnered through the Universal Credit Ratings Group (UCRG), which was set up in Hong Kong in 2013 and already encompasses the most respected agencies from both countries, as well as the US-founded Egan-Jones Ratings Company. The new agency may be an expanded version of UCRG, which is still predominantly used by internal Chinese investors.

READ MORE: New credit rating agencies to balance 'Big Three', China says
Russia’s foreign currency reserves stand at a respectable $380 billion – the sixth biggest in the world - and sufficient to finance any immediate obligations. But the Russian Central Bank has been forced to burn the money keeping the ruble afloat, and budget shortfalls due to oil prices may also have to be covered from the coffers.
Posted by seemorerocks at 10:13