Eleanor Catton's father, Dr. Philip Catton rings in to challenge Sean Plunkett and his name-calling tirade.  This represents the difference between someone who represents a gentle, well-thought-out argument pf Dr. Catton, and the brutal, fascist name-calling of Plunkett. 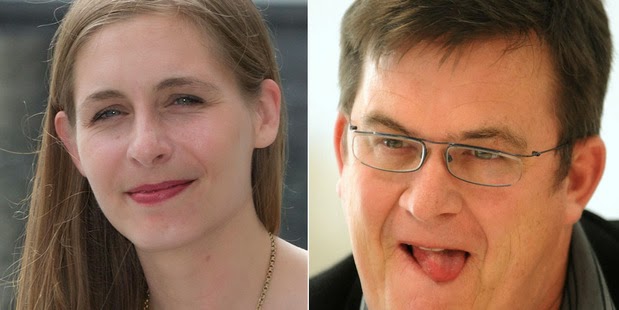 To hear the discussion GO HERE

Dr Philip Catton, a former senior lecturer in philosophy at the University of Canterbury, confronted RadioLive presenter Plunket on his show this morning.

Plunket, who railed against Catton's comments on his Wednesday show, said Dr Catton had asked to come on air to address the "brouhaha" that had emerged this week following his daughter's remarks at a literary festival in India.
On Wednesday Plunket said he did not consider Catton an ambassador for New Zealand but "a traitor", and called her an "ungrateful hua".
Catton's statements, which she made at the Jaipur Literary Festival in India last week, also attracted comment from the Prime Minister, John Key, who said she was aligned with the Green Party and her comments "probably summarise the Green Party's view of this Government".
Dr Catton said that resorting to name-calling "derailed" the discussion about government and the arts that the Man Booker prize-winning author had raised.
"Name-calling is no help to respect for ideas, respect for differences of ideas," Dr Catton said.
"I think we teach this to our children, and I think you're a father. You've disappointed me in the approach that you've taken, the name-calling approach, an approach which isn't that advanced.
"There's no abuse of respect by someone engaged in strident criticism, but the kind of engagement that that can beget is derailed by name-calling."
Plunket defended his comments, saying he did not call Catton names, but "a name", and said the word "hua" was a "description", not name-calling.
At the end of the interview, he said he stood by his comment that Catton was ungrateful.
"I think you used words that have nothing to do with the motivation of someone's critical discussion, you called someone an 'ungrateful hua', you called them 'a traitor', these are names," Dr Catton said, saying they were also "factually false".
He later said: "What you've said does not square with the reality that I know. I'm extremely surprised by the inaccuracy of your vision, not just by the inaccuracy of what you've said."

'Neither ungrateful, nor a traitor'

Dr Catton defended his daughter's right to voice her criticisms of the Government - in which she said National was dominated by "neo-liberal, profit-obsessed, very shallow, very money-hungry politicians" who didn't care about culture - saying that "calling into question the motivations of our political leaders ... is a highly pertinent and important intellectual task".
The pair were at loggerheads throughout the interview, as Plunket and Dr Catton disagreed on what was said and the issues at the centre of the debate.
"You don't think your daughter is ungrateful?" Plunket asked him at one point.
"Neither ungrateful, nor a traitor, for being critical, at a time when criticism really should be out there and much discussed," Dr Catton replied, again saying he was "disappointed" in the radio host.
When Plunket tried to bring the interview to an end, Dr Catton, 58, said he wanted to keep the discussion going for longer.
"I would like more, I would like an evening with you because they are so many thoughts, and thoughts about how thoughts need to be discussed. I think that I can talk to you usefully about it."
Plunket replied by saying: "Okay, I hear your anger, and I appreciate the fact that you've come in and addressed it to me, and I share some of your concerns.
"Not by way of apology, if I had my time again I would not have said that Eleanor should stay out of politics, because no one should stay out of politics - it's a democracy, everyone should be involved in politics.
"But, ungrateful I'll stand by as a possible interpretation, and we can agree to disagree on that. And I would say that if I hold responsibilities that my use of that word [hua], which was not the word many thought of it, set the tone for certainly a social media debate which didn't advance the important issues that you talked about, and I think Eleanor, in her own way, was trying to raise."
They could meet up for "a wine and a discussion", Plunket said, saying he would also "love to talk to Eleanor as well".
Catton has addressed the controversy on social media

I spoke twice without pay at Green Party events; donated one signed book & $500; bought two tshirts & one bumper sticker at no discount. 1/2