Radioactive leak in US 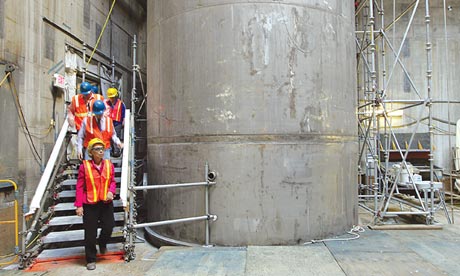 Six underground storage tanks at a nuclear facility in Washington state are leaking radioactive waste, but there is no immediate risk to human health, officials say.

The newly discovered leaks, at the Hanford Nuclear Reservation, come one week after the US energy department revealed that radioactive waste was found to be escaping from one tank at Hanford.

The seeping waste adds to decades of soil contamination caused by past storage tank leaks at Hanford and threatens to further taint groundwater below the site. However, officials said there was no immediate danger of any pollution of the Columbia river.

"There is no immediate or near-term health risk associated with these newly discovered leaks, which are more than 5 miles (8km) from the Columbia River," Inslee said. "But nonetheless this is disturbing news for all Washingtonians."

The governor said Chu told him that his department initially missed the other five leaking tanks because staff there did not adequately analyse data.

"This certainly raises serious questions about the integrity of all 149 single-shell tanks with radioactive liquid and sludge at Hanford," he said.

The energy department issued a brief statement acknowledging that six waste tanks were found to be leaking and adding that there was "no immediate public health risk".

Four of the tanks in question, including the two biggest of the group, are known to have leaked waste in the past as well, Suzanne Dahl, the tank waste treatment manager for the state Department of Ecology, told Reuters.

"It points to the age of the tanks and how there's going to be an increased probability of this happening in the future," she said. "When waste is in the tanks, it's manageable. Once it's out of the tanks and in the soil, it's much harder to manage it, remove it, and down the road you're adding to contamination in the groundwater that already exists."

The department said that monitoring wells have identified no significant changes in concentrations of chemicals or radionuclides in the soil.

The two biggest tanks at issue have capacities of about 750,000 gallons and 500,000 gallons, while the four others are designed to hold up to 55,000 gallons, Dahl said. All were constructed many decades ago.

The 586 sq m (1,518 sq km) Hanford reservation was established near the town of Hanford in 1943 as part of the Manhattan Project, the US government program that developed the first atomic bombs.

Production of plutonium materials at the site continued through the Cold War and ended there in 1989 as work shifted to cleanup of nuclear and chemical waste at Hanford, considered one of the largest and most complex such projects in the country.

As part of the cleanup, as much remaining liquid waste as possible was pumped out of the older single-shell tanks into sturdier double-walled tanks in a process completed in 2005, Dahl said.

But sludge, mud-like waste and pockets of liquid remained behind in the older tanks, and it is that material that was found to be seeping in the soil again from six tanks, she said. According to the DOE, one of those tanks currently holds about 447,000 gallons of radioactive sludge
Posted by seemorerocks at 10:31