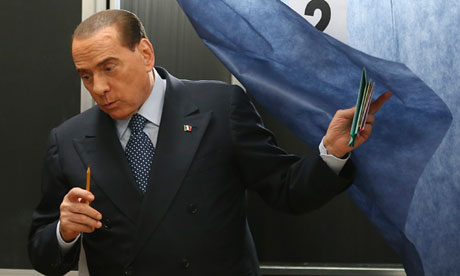 Italy threatened to pitch the eurozone into fresh turmoil on Monday night as the result of its general election pointed to a hung parliament and confirmed the anti-establishment Five Star Movement, led by a comedian-turned-politician, had exploded on to the national stage.

With almost all the votes counted, the centre-left had a lead in the race for the lower house, the chamber of deputies, where it would be assured an outright majority under electoral rules. It was also reckoned to have more seats in the senate, beating a resurgent right led by Silvio Berlusconi by a narrow margin. However, the figures and estimates given did not include the results of four overseas constituencies.

Neither right nor left had an outright majority in the upper house, where the balance will be held by Beppe Grillo's Five Star Movement (M5S). Grillo has ruled out supporting either side in his drive to sweep away Italy's existing political parties and the cronyistic culture they support – a sentiment he appeared to reiterate after the countby insisting the M5S was not planning on "any stitch-ups, big or small" and lambasting Berlusconi's voters for committing "a crime against the galaxy".

In an audio message broadcast live online, Grillo said that, after his movement's "exceptional" results, the mainstream parties were "finished, and they know it". "We've started a war of generations … They've been there for 25 to 30 years and they've led this country to catastrophe," he said. "We will be an extraordinary force … We will be 110 inside [the parliament] and several million outside."

Exceeding even the most adventurous pre-electoral predictions, the M5S emerged as Italy's biggest single party in the chamber – a result that will send shockwaves through the eurozone and beyond. Grillo boasted it had achieved its prominence in the space of little more than three years, "with no money and no [state] funding." However, Grillo's movement lagged the two big alliances in the number of seats because it is running alone and not in a coalition.

The result indicated that fresh elections were a strong possibility and, at best, foreshadowed a weak government unable to pass the tough reforms Italy needs to enhance its grim economic prospects.

Pier Luigi Bersani, the leader of the centre-left Democratic Party, appeared to signal that his party would attempt to form a government. "It is clear to everyone that a highly delicate situation is developing for the country," he was quoted by the Ansa news agency as saying. "We will manage the responsibility these elections have given us in the interest of Italy."

Gianfranco Fini, a former foreign minister whose party ran as part of outgoing prime minister Mario Monti's centrist alliance, said: "I think the worst is yet to come for Italy."

European leaders have been desperate to see a stable government in Italy, and are likely to be horrified at the triumph of populism in the eurozone's third biggest economy.

The likely results threaten to reignite the euro's instability after months of relative calm. The markets took fright: the "spread" between Italian and German government bonds, which increases in line with investors' concern over Italy's ability to repay its debts, shot up. Having started the day at 258 basis points, it reached 293.

Grillo, and to a lesser extent Berlusconi – both showmen politicians – were the victors. The understated Bersani saw an initially substantial lead in the polls slip away. Angelino Alfano, named by Berlusconi as the right's prime minister in case of victory, said the result was "very positive – I would say extraordinary, even – and we are very satisfied".

But the biggest loser of all was the sober, professorial Monti. His ill-assorted alliance of free-market liberals, Christian Democrats and former neofascists appeared to have garnered barely 10% of the vote. Its failure was the price of the tax increases and unpopular reforms that Monti's administration imposed after taking office in November 2011.

Monti insisted he was content with the result, having created a programme that had presented voters with a "realistic" way forward for the country. "Ours is a satisfying result," he told a press conference.

But his dismal showing could have a decisive impact on the prospects for a stable government because his bloc seems to be unable to furnish either of the two main alliances with the seats needed for a senate majority.

A representative of the M5S avoided ruling out a deal to elect the country's next prime minister. Alessandro Di Battista told the news agency Ansa: "We are waiting for the official figures. First, we need to know how many we are – count ourselves up. Then we'll meet, listen to the web and decide what to do."

The projections suggested the movement could have more than 50 seats in the 315-seat senate and well over 100 in the 630-seat lower house. While paying tribute to Grillo's contribution to the M5S's result, Di Battista stressed the movement's elected representatives would take their decisions independently of him.

Shunning television and other established media, Grillo embarked on a barnstorming tour of the country that took him to 77 towns from the Alps to the tip of the "boot" and on to Sicily. He rounded it off with a rally in Rome that attracted several hundred thousand people.

Turnout in the election was about 75% – the lowest since the Italian republic was founded after the second world war. Abstention was encouraged by heavy snow in parts of the north and centre of the country and storms and flooding in the south. But it was rooted in widespread disillusionment over the corruption and stagnation in Italian politics.

Former Berlusconi supporters who had been toying with abstention seem to have been persuaded to vote in force by the media tycoon's promise to abolish an unpopular property tax on primary residences and refund the €4bn (£3.4bn) levied in 2012.

The tax was imposed as part of a drive by Monti's technocratic government to put Italy's public finances in order after a collapse at the end of 2011 in investor confidence.

Now that risk is fast taking shape again. Berlusconi is deeply mistrusted in the markets and Grillo wants a referendum on whether Italy should quit the euro. Mired in recession, Italy has had a decade of economic near-stagnation followed by a year of punishing austerity that has made the pledges of both men – though lambasted by their opponents as unfeasible – highly attractive.
Posted by seemorerocks at 15:41