Global warming may cause extremes by slowing "planetary waves"

* U.S. drought, European heatwave may have common cause 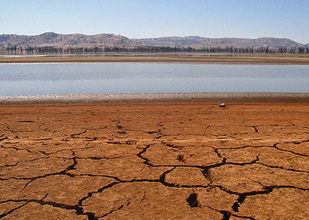 OSLO, Feb 25 (Reuters) - Global warming may have caused extreme events such as a 2011 drought in the United States and a 2003 heatwave in Europe by slowing vast, wave-like weather flows in the northern hemisphere, scientists said on Tuesday.

The study of meandering air systems that encircle the planet adds to understanding of extremes that have killed thousands of people and driven up food prices in the past decade.

"During several recent extreme weather events these planetary waves almost freeze in their tracks for weeks," wrote Vladimir Petoukhov, lead author of the study at the Potsdam Institute for Climate Impact Research in Germany.

"So instead of bringing in cool air after having brought warm air in before, the heat just stays," he said in a statement of the findings in the U.S. journal Proceedings of the National Academy of Sciences.

A difference in temperatures between the Arctic and areas to the south is usually the main driver of the wave flows, which typically stretch 2,500 and 4,000 km (1,550-2,500 miles) from crest to crest.

But a build-up of greenhouse gases in the atmosphere, blamed on human activities led by use of fossil fuels, is heating the Arctic faster than other regions and slowing the mechanism that drives the waves, the study suggested.

Weather extremes in the past decade include a European heatwave in 2003 that may have killed 70,000 people, a Russian heatwave and flooding in Pakistan in 2010 and a 2011 heatwave in the United States, the authors added.

"Here, we propose a common mechanism" for the generation of waves linked to climate change, they wrote.

Past studies have linked such extremes to global warming but did not identify an underlying mechanism, said Hans Joachim Schellnhuber, director of the Potsdam Institute and a co-author.

"This is quite a breakthrough," he wrote. The scientists added that the 32-year-period studied was too short to predict future climate change and that natural variations in the climate had not been ruled out completely as a cause.

The study only considered the northern part of the globe, in summertime. Petoukhov led another study in 2010 suggesting that cold snaps in some recent winters in Europe were linked to low amounts of ice in the Arctic Ocean.

Almost 200 governments have agreed to work out by the end of 2015 a deal to comb
Posted by seemorerocks at 11:55