Protests across the globe

Tens of thousands in Spain protest economic policy, corruption
Tens of thousands of Spaniards marched through cities across the country on Saturday to protest deep austerity, the privatization of public services and political corruption. 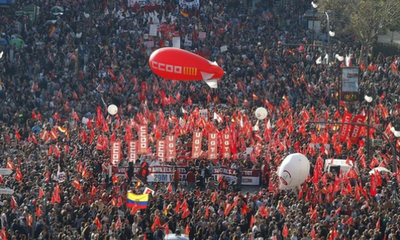 Gathering under the banner of the "Citizen Tide", students, doctors, unionists, young families and pensioners staged rowdy but non-violent demonstrations as a near five-year economic slump shows no sign of recovery and mass unemployment rises.

"I'm here to add my voice. They're cutting where they shouldn't cut; health, education ... basic services. And the latest corruption scandal is just the tiniest tip of a very large iceberg," said Alberto, 51, an account administrator for a German multinational in Madrid, who preferred not to give his surname.

Protests in Spain have become commonplace as the conservative government passes measures aimed at shrinking one of the euro zone's highest budget deficits and reinventing an economy hobbled by a burst housing bubble.

Prime Minister Mariano Rajoy has introduced some of the deepest budget cuts in Spain's democratic history in an attempt to convince investors the country can weather the economic crisis without falling back on international aid.

But, with more than half of the country's young people out of work and growth not expected until sometime next year, the measures have only scratched the surface of the budget shortfall which is expected to be more than double the target in 2014.

Meanwhile, corruption scandals which have hit the ruling party as well as the once-popular royal family has left many Spaniards disenchanted with their leaders on all sides of the political spectrum.

In Madrid, under a clear, cold winter sky, Saturday's marches convened from four different points by early evening in Neptune Square, between the heavily policed and barricaded parliament, the Ritz Hotel and the stock exchange.

Carrying placards which condemned everything from cuts in the health sector to massive bailouts granted to Spain's banking system, crowds banged drums and chanted, while dozens of riot police stood on the sidelines.

Egypt Food Manufacturer Closes Business After Workers Protest
"Faragalla Group, an Egyptian food producer, said it shut down its factories yesterday after workers stormed the complex to demand higher pay. The plants, located near Alexandria, halted production after they were raided by more than 200 workers, some of them carrying swords."

Occupations in Rome Defend the Rights of Commoners
Posted by seemorerocks at 10:47