Lingering winter weather in the Texas Panhandle has left some roads and schools closed a day after a blizzard dumped a record 19.1 inches of snow in the Amarillo area.

The Texas Department of Transportation said part of Interstate 40 east of Amarillo and near the border with Oklahoma remained closed Tuesday. Stretches of Highway 87 in the Dalhart and Dumas areas were also closed.

State officials said improving weather should mean reopening the roadways by early Tuesday afternoon. Temperatures in the Amarillo area are expected to reach the mid-30s.

Road closures and blizzard conditions in the area lead to as many as 100 motorists stranded between Amarillo and Lubbock on Monday.

Numerous major Texas Panhandle highways were closed for the night as subfreezing temperatures froze ice and compacted snow on the pavement.

The Texas Department of Transportation website showed most major routes in the region were closed.

The National Weather Service said as many as 100 motorists on Interstate 27 between Amarillo and Lubbock found themselves stalled in whiteout conditions in the worst of the storm Monday. 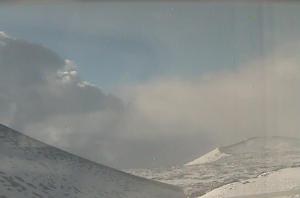 The burst of winter weather on Mauna Kea over the weekend has apparently come to an end. Snowfalls were replaced by freezing rain and high winds on Hawaii island summits Monday and temperatures are expected to rise above freezing today and Wednesday.

“With more sunshine and warmer temperature, I would expect what’s left of the snow will melt pretty quickly over the next couple of days,” said Robert Ballard, a forecaster with the National Weather Service Honolulu office.

Forecasters issued a high wind watch for the summits above 8,000 feet starting this morning through 6 a.m. Wednesday. Winds of 45 mph with gusts over 60 mph may blow over the summits, Ballard said.

A wind advisory is also in effect for parts of Maui County and Hawaii island through late tonight because of strong trade winds. Forecasters expect sustained winds of 20 to 40 mph, with gusts over 50 mph that could bring down tree branches, cause power outages and make driving difficult.

The winds shouldn’t be as strong on Oahu and Kauai, where forecasters predict 15 to 30 mph winds, with higher gusts up to 50 mph in a few areas.
Posted by seemorerocks at 11:31