More extreme weather in the US

After dumping more than a foot of snow on parts of the Midwest, a major winter storm is heading toward New England, where it is expected to deliver the region’s third straight weekend of significant snowfall. Stalled vehicles are seen during a blizzard as traffic comes to a standstill on the I-635 in Kansas City, Kansas, February 21, 2013 (REUTERS / Dave Kaup)

Residents of the Northeast are bundling up in anticipation of the latest winter storm, after having already endured a historic blizzard earlier this month. The winter weather system is expected to plague New Englanders with messy traffic and a dangerous commute.


The storm has already killed two people in the Midwest, including a 19-year-old Nebraskan woman who died in a two-car accident and an 18-year-old Oklahoma man whose vehicle slid off the road, according to the states’ highway patrols. Kansas was buried in 15 inches of snow, prompting a 200-mile interstate highway to shut down, with cars stuck in the mess, some unable to move. The snowfall was so bad that the National Guard was dispatched to help stranded motorists get off the highway, spokeswoman for Kansas emergency management services Sharon Watson told the Associated Press.


About 60 buses and several tow trucks were also stranded in the buried streets of Kansas and Missouri, and the state is continuing to help drivers escape from the snow.
“It’s still an ongoing process to get people off the roads,” Kansas City Mayor Sly James told CNN. The 18th green is covered in snow as play was suspended during the first round of the WGC-Accenture Match Play Championship golf tournament in Marana, Arizona February 20, 2013 (Reuters / Matt Sullivan)

Midwest airports continued to remain inoperative, forcing 570 flight cancellations on Friday, 127 of which occurred at Chicago’s O’Hare airport as the storm moved eastward. Nearly 200 snowplows worked through the night on Friday morning to clean up the city’s streets before the morning commute.


And in Effingham, Illinois, 137 truckers who could no longer drive through the storm spent Thursday night in a parking lot, AP reports.
“When it gets really bad, they like to camp out,” said Tia Schneider, who works as a cashier at the truck stop. “They can make reservations from 500 miles away to make sure a space is available.” A man stands next to his car that is stuck in the snow during a blizzard in Kansas City, Kansas, February 21, 2013 (REUTERS / Dave Kaup)

As Americans waited out the storm, state legislatures and schools shut down across Kansas, Missouri, Arkansas, Nebraska and Iowa. Numerous businesses and shopping malls also closed down on Thursday and Friday as residents were told to stay indoors.


“If you don’t have to get out, just really, please, don’t do it,” said Kansas Gov. Sam Brownback.
While the worst of the storm has passed over the Midwest, the Northeast could once again experience another messy weekend as the storm system continues into New England on Saturday and Sunday, bringing slush, ice and snow from Connecticut to Maine. 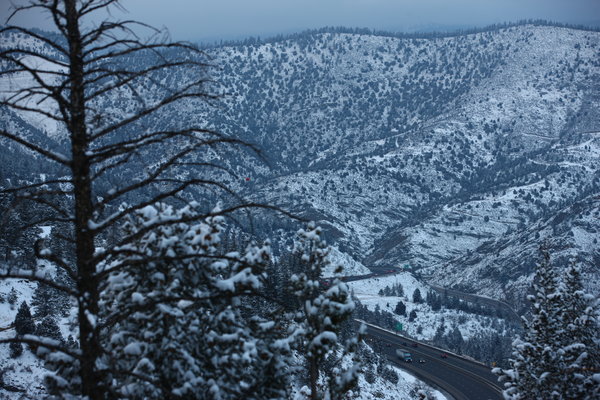 
DENVER (The New York Times) – After enduring last summer’s destructive drought, farmers, ranchers and officials across the parched Western states had hoped that plentiful winter snows would replenish the ground and refill their rivers, breaking the grip of one of the worst dry spells in American history. No such luck.

Lakes are half full and mountain snows are thin, omens of another summer of drought and wildfire. Complicating matters, many of the worst-hit states have even less water on hand than a year ago, raising the specter of shortages and rationing that could inflict another year of losses on struggling farms.

Reservoir levels have fallen sharply in Arizona, Colorado, New Mexico, and Nevada. The soil is drier than normal. And while a few recent snowstorms have cheered skiers, the snowpack is so thin in parts of Colorado that the government has declared an “extreme drought” around the ski havens of Vail and Aspen.

“We’re worse off than we were a year ago,” said Brian Fuchs, a climatologist at the National Drought Mitigation Center.

This week’s blizzard brought a measure of relief to the Plains when it dumped more than a foot of snow. But it did not change the basic calculus for forecasters and officials in the drought-scarred West. Ranchers are straining to find hay — it is scarce and expensive — to feed cattle. And farmers are fretting about whether they will have enough water to irrigate their fields.

“It’s approaching a critical situation,” said Mike Hungenberg, who grows carrots and cabbage on a 3,000-acre farm in Northern Colorado. There is so little water available this year, he said, that he may scale back his planting by a third, and sow less thirsty crops, like beans.

“A year ago we went into the spring season with most of the reservoirs full,” Mr. Hungenberg said. “This year, you’re going in with basically everything empty.”

National and state forecasters — some of whom now end phone calls by saying, “Pray for snow” — do have some hope. An especially wet springtime could still spare the Western plains and mountains and prime the soil for planting. But forecasts are murky: They predict warmer weather and less precipitation across the West over the next three months but say the Midwest could see more rain than usual.

Water experts get more nervous with each passing day.

“We’re running out of time,” said Andy Pineda of the Northern Colorado Water Conservancy District. “We only have a month or two, and we are so far behind it’s going to take storms of epic amounts just to get us back to what we would think of as normal.” .....