There is an election going on today in Italy. Bound to make no difference who wins – the debt is still there - and growth is dead.

Mammoth debt hangs over next Italian government
Whoever wins Italy's elections this weekend will inherit a 2 trillion euro ($2.7 trillion) public debt that is draining badly needed funds which would be better used to spur growth. 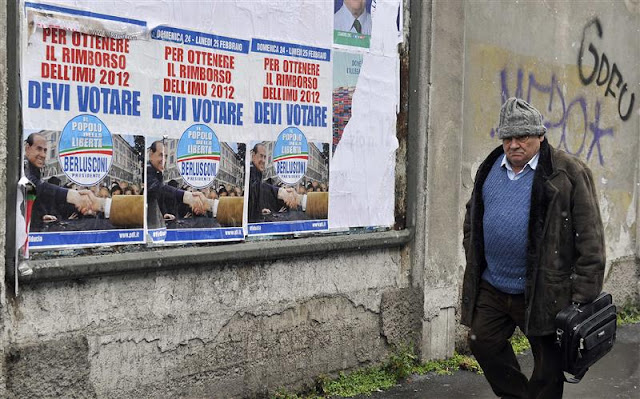 At 126 percent of gross domestic product, Italy's debt is at its highest since World War One. Tough austerity measures since November 2011 by the outgoing technocrat government of Mario Monti pulled Italy from the brink of a Greek-style financial collapse, but did not stop the debt mountain rising.

In the run-up to February 24-25 parliamentary elections, all the main parties have put forward their own debt-cutting recipes.

The anti-establishment 5-Star movement wants to temporarily freeze the payment of interest rates on Italian government bonds - something that would essentially amount to default.

Silvio Berlusconi's People of Freedom party proposes a massive sale of state-owned assets, while the centre-left PD, leading in opinion polls, plans to privatize some companies and negotiate softer debt targets with the European Union, that is currently asking to cut to 60 percent of GDP in 20 years.

But analysts say investors should not expect any significant debt reduction in the short term given Italy's painful recession and its history of anemic growth rates.

"What Rome could promise is to put the debt on a downward path with privatizations and policies aimed at boosting the growth rate of the economy," said Alberto Alesina, professor of Political Economy at Harvard university.

"No one thinks Italy can push its debt down towards 90 percent of GDP in a few years. A credible plan to reduce it would have to span 20 years," he said. "Italy needs a shock therapy for its economy."

JUST AHEAD OF HAITI

Between 2000 and 2010, average Italian growth has been less than 0.3 percent per year, making it not only the most sluggish economy in the euro zone but the third most inert in the world, ahead of only Zimbabwe, Eritrea and Haiti.

Between 2007 and 2013 the economy is expected to have actually contracted by 7 percent and unless that trend is reversed cutting debt is mission impossible.

"One of the biggest hurdles to reduce Rome's debt has been, is and will be the lack of growth," said Fedele De Novellis, economist at think-thank REF Ricerche.

The tax hikes and spending cuts undertaken by Monti's government brought Italy's primary surplus - budget surplus net of debt servicing costs - to around 3 percent of GDP at end 2012, the highest in the euro zone.

But that won't be enough if the economy doesn't grow, De Novellis said.

Analysts say the next government needs to boost the rate of growth to at least one percent a year.

This, together with average borrowing costs stable at their current level of 4 percent, would allow the government to reduce gradually the debt-to-GDP ratio to 90 percent in the next 20 years, without having to hike the primary surplus further.

However, ratings agency Standard & Poor's warned this week that Italy risked losing the reforms momentum unless a clear winner emerges from the election.

Selling state assets would also help rein in debt. The state owns roughly 30 percent of energy groups ENI and Enel, while it is the sole owner of the postal service and the railroad companies.

However, market prices are so depressed that privatizations - a politically sensitive topic - would not be a game-changer in terms of debt reduction.

A report by Istituto Bruno Leoni, a pro-market think tank, estimated that if the Treasury sold all the company stakes it holds - including in the state broadcaster RAI - it would reap only 135 billion euros - less than 7 percent of the country's debt pile. ($1 = 0.7479 euros)