I have been bringing reports from Sea Shepherd. Here is mainstream, Australian media – and the Japanese point-of-view.

The Japanese media calls Sea Shepherd 'terrorists' – aren't we all?!

I don't think the Japanese whalers  have had a very good season on the ice, thanks to Sea Shepherd

Japanese call for action after showdown 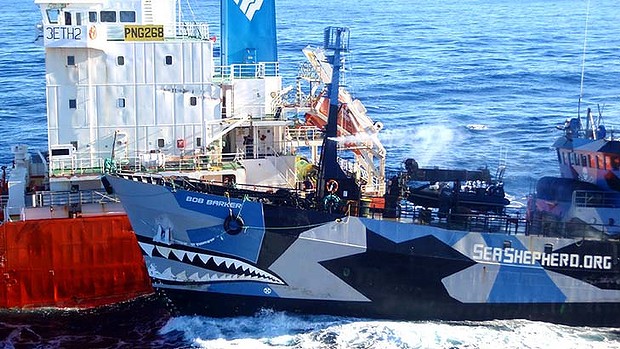 
JAPANESE whalers are angrily renewing demands for action to restrain Sea Shepherd activists after what was claimed to be sabotage of refuelling operations off the Australian Antarctic Territory.


During clashes among scattered icebergs north-west of Australia's Davis base, the Sea Shepherd vessels Bob Barker and Sam Simon suffered superstructure damage in collisions with the Nisshin Maru and Sun Laurel. ''Sea Shepherd is sabotaging [the] refuelling operation, which is essential for safe navigation of ships,'' Japan's Institute of Cetacean Research said in a statement. ''The sabotage is not only malicious but inconceivably obstructive.''


The ICR called on Australia, New Zealand, the Netherlands and the United States as countries from which Sea Shepherd operated, to ''restrain them and deal with their criminal actions in a strict and objective manner.''

The statement made no mention of the Japan Self-Defence Force icebreaker, Shirase, which appeared near the conflict and flew a helicopter over the tanker.


Environment Minister Tony Burke called on the Japanese government to confirm that there was no link between the Shirase and the refuelling tanker.


''Let's face it, without fuel there is no whaling fleet,'' Mr Burke said. ''The tanker is the lifeblood for the rest of this disgusting operation.''


After giving up the attempt to refuel, the whalers made a fresh bid to hunt but failed to harpoon any, according to Sea Shepherd founder Paul Watson.


''We sent small boats out to block them and also found that our helicopter flying ahead of the harpoon vessels can successfully force the whales to dive and disperse,'' Mr Watson said.


He said the Nisshin Maru threatened to damage the Steve Irwin's helicopter deck with water cannon while it was out flying, but the Sea Shepherd ship was able to outrun the factory ship.


''So, no refuelling so far, and no whales killed,'' Mr Watson said by email on Tuesday.