Want an explanation for the obesity and cancer epidemics?

This has been known about for a long tim, AT LEAST since the book “Our Stolen Future” came out in 1996

My own health has been destroyed by early pesticide exposure. 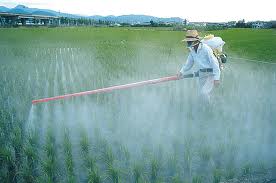 The report State of the Science of Endocrine Disrupting Chemicals 2012 by the United Nations Environment Programme (UNEP) and the World Health Organization (WHO) says that there is a growing probability that maternal, fetal and childhood exposure to chemical substances plays a larger role in causing endocrine-related diseases and disorders.

"We present new proofs that there is a link between endocrine disrupting chemicals and common diseases," Åke Bergman, professor at Stockholm University and chief editor of the report, said in a statement.

"Endocrine illnesses are so common and increase, and we can demonstrate the link to endocrine disrupting chemicals. The rate of increase is so great that genetic causes can't be the reason why," the professor said.

In the report, the researchers show that there are several disorders which are increasing and can be linked to endocrine disrupting substances:

Obesity and diabetes - these have increased over the past 40 years, especially type 2 diabetes, which has more than doubled since 1980.
Decreasing male sperm counts and genital malformations, which are increasing among young boys.

Birth defects – such as low birth weight and abrupt pregnancies - which have increased in many countries.

Premature breast development among young girls, a phenomenon that can lead to breast cancer.

Thyroid problems, which are also increasing among children in some countries and can lead to behavioural disorders.

Endocrine disrupting chemicals mainly enter the environment through industrial and urban discharges, agricultural run-off and the burning and release of waste. Human exposure can occur via the ingestion of food, dust and water, inhalation of gases and particles in the air, and skin contact with plastics and rubbers.

Known examples of endocrine disrupting chemicals include phthalates (a plastic-softener), brominated flame retardants (often used in household textile or furniture) and metals like lead and mercury.

Some endocrine-disrupting chemicals occur naturally, while synthetic varieties can be found in pesticides, electronics, personal care products and cosmetics. They can also be found as additives or contaminants in food.

"Of greatest significance is that we now know that there are particularly vulnerable periods during fetal and postnatal life when endocrine-disrupting chemicals alone, or in mixtures, have strong and often irreversible effects on developing organs, whereas exposure of adults causes lesser or no effects," the authors write.

When it comes to testing, the authors say that known endocrine-disrupting chemicals are only the ‘tip of the iceberg’ and more comprehensive testing methods are required to identify other possible endocrine disruptors, their sources, and routes of exposure.

More scientific evidence is also needed to identify the effects of mixtures of endocrine-disrupting chemicals on humans and mainly from industrial byproducts to which humans are increasingly exposed.

Cefic, the European Chemical Industry Council, said this was exactly the problem with the new report. The paper links several effects on human to environmental exposure to chemicals, without sufficient proof of a causal relationship, they say, ignoring the role played by other factors such as lifestyle.

Cefic encourages governments and intergovernmental agencies to use consistent and objective criteria for evaluating studies and a transparent framework for evaluating the overall weight of scientific evidence.

Wake-up call for the EU

However, Sylvia Maurer, safety and environment senior policy officer at the European Consumer Organisation (BEUC), called the UNEP and WHO report a "landmark study".

According to BEUC, the report alerts policy makers to the risks associated with chemicals that can interfere with hormonal actions, and currently lack adequate safeguards.

"Every day, consumers are in contact with products that contain chemicals which have not been sufficiently tested for their safety," Maurer said. "This is a tremendous problem for our society knowing that these hazardous chemicals may be linked to the formation and increase in severe and chronic diseases such as diabetes, cancer, cardiovascular diseases and obesity."

"The authors of the study explain very clearly that current risk assessment and risk management methods give false assurances of safety. We basically underestimate the real risks of disease related to endocrine disruptors," the BEUC policy officer added.

In 2006, the European Commission adopted the REACH regulation, which requires chemical manufacturers to register 30,000 out of the 100,000 or so substances currently on the market and submit them for safety screening and subsequent authorisation.

Those that are considered to pose an unacceptable threat to human health or the environment may be phased out and eventually replaced.

The International Chemical Secretariat (ChemSec) said the UNEP and WHO report highlights the need for all stakeholders to act to limit human exposure of endocrine disrupting chemicals.

"In the EU there is an on-going process of agreeing on criteria for endocrine disruptors, and it is highly important that the outcome of this process will be inclusive and efficient criteria, taking into account the built-in problems with endocrine disrupting chemicals such as low-dose effects,” Anne-Sofie Andersson, ChemSec's director, told EurActiv.

Sylvia Maurer, safety and environment senior policy officer at the European consumer organisation BEUC, told EurActiv: "The report rightly calls on policy makers to reduce exposure to those hormone-disturbing chemicals and to even consider bans and restrictions of some hazardous chemicals."

"It is of particular importance to better protect vulnerable consumers such as pregnant women, babies and young children as it has been found that the effects of endocrine disrupters during these crucial stages of human development can have life-long negative health consequences. Consumers’ exposure to chemicals in everyday products such as toys, textiles, plastic items, cosmetics and furniture needs to be reduced," Maurer added.

Executive Director of UNEP Achim Steiner said: “Chemical products are increasingly part of modern life and support many national economies, but the unsound management of chemicals challenges the achievement of key development goals, and sustainable development for all."

“Investing in new testing methods and research can enhance understanding of the costs of exposure to endocrine disrupting chemicals, and assist in reducing risks, maximising benefits and spotlighting more intelligent options and alternatives that reflect a transition to a green economy,” Steiner added.

“We urgently need more research to obtain a fuller picture of the health and environment impacts of endocrine disruptors,” said Maria Neira, WHO’s director for Public Health and Environment.

“The latest science shows that communities across the globe are being exposed to endocrine disrupting disorders, and their associated risks. WHO will work with partners to establish research priorities to investigate links to endocrine disrupting chemicals and human health impacts in order to mitigate the risks. We all have a responsibility to protect future generations."

Åke Bergman, professor at Stockholm University and chief editor of the report, said:

"The most important global challenge is to find ways to minimise the exposure to chemicals that disrupt the endocrine system and leads to negative health effects. This is a threat to the environment of the same magnitude as humans' effect on the climate."