Mother Nature on the Move -- Sinkholes and landslips

With thanks to the Extinction protocol.

Massive landslip in the UK

THERE is no end in sight to the severe disruption a landslide has caused for Scunthorpe area rail passengers, according to a leading rail expert.

Sim Harris, managing editor at Railnews, the national newspaper for the British rail industry, says the landslide near Hatfield Colliery that is affecting thousands of North Lincolnshire rail passengers is the worst in decades.

The disruption for passengers travelling between Scunthorpe and Doncaster has seen their journeys extended by up to an hour as they take buses to and from their destination.

Work cannot begin repairing the track until the landslide stops moving – and officials at Network Rail say they have no idea when this will be.
Mr Harris says it could be at least May before normal services resume.
Mr Harris said: "Landslips themselves are not that uncommon and over the last year there have been quite a few because of the heavy rain that we have had.

"There have been a lot of landslips that have not been rail-related, but some railways have been affected.

"This one is certainly the worst in my recollection and you have to go back a long way to find anything of this nature.

"In 1953, there were floods along the east coast service near Newcastle, where bridges were washed away.

"I don't think I have seen anything like this in recent memory. I don't recall anything as serious as this.

"There is no end in sight." 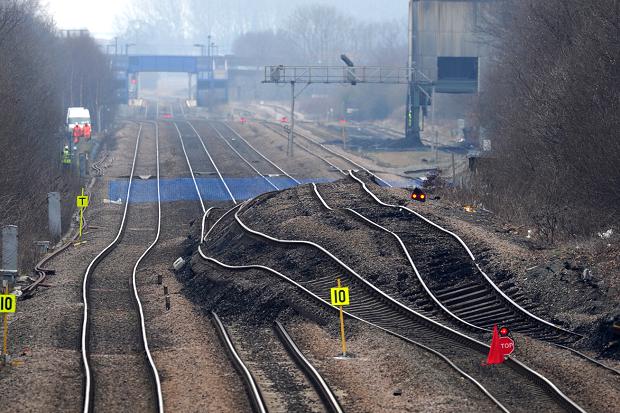 He says repairing the line will not be an easy task.

"Until the ground stops moving, there is not much that Network Rail can do – their hands are tied.

"When it stops moving, it will take more than five minutes to rebuild four tracks of main railway. There are junctions that are involved which make it much more difficult.

"Not only are both sides of the railway tracks wrecked, the foundations and drainage are a dog's breakfast, it is more than just a matter of the railway."
Freight services are now being directed through Lincoln and Brigg.

He said: "I understand there's no guarantee this will be over in eight weeks." 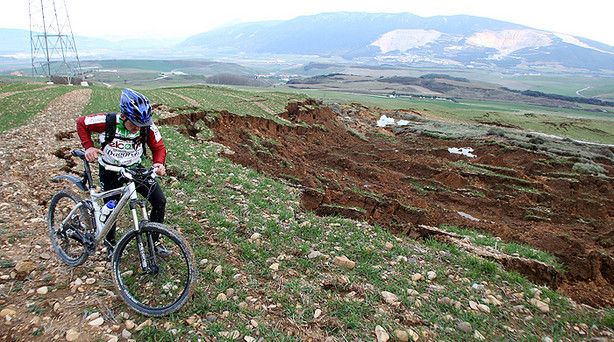 Heavy rains in recent weeks have caused a major landslide in Subiza (Cendea of ​​Galar) that has devastated rural roads, farms and caused serious damage to two electrical towers that are at serious risk of falling.

The landslide is located on the southeast slope of Mount of Forgiveness, towards Bells, and therefore did not affect any house in this small town of Basin, about 190 inhabitants.

The dimensions of the land mass, dragged stones and vegetation, as a result of heavy rainfall are calculated such that can reach 800 meters long and 700 wide.

“It is of immense dimensions, and quite tremendous.” I’ve never seen one this big slide,” claimed yesterday Esteban Faci, geologist of the Government of Navarre, in an initial field assessment.

Continuous rains, during January and February, along with the snowmelt, are behind this spectacular landslide, which began about three or four weeks, according to Ismael Amatriain.

As if it were a glacier, the tongue of land, rocks and vegetation has shifted gradually from the hillside, taking about six or seven fields of wheat and barley crops with it. It has also destroyed three rural roads; sometimes breaking them so dramatically that you could see a stretch perfectly, you can see where the next, 10 or 15 feet had moved.

In addition, roads, are covered by tons of earth in places, and have large and deep cracks. The council has sealed off many of these roads, making access totally impassable. The landslide also destroyed a cattle track that crossed the region.

At least 200 families of Yamrad Bala, 16 km from Handwara have been forced to migrate to other locations after cracks developed in the land around their houses.

The cracks are widening constantly giving a nightmarish experience to the inhabitants.

Locals said that land was developing cracks, which were widening with each passing day.

They expressed fear that their residential structures may collapse anytime and result in devastation of life and property.

“The land is developing cracks and it appears that major soil erosion may wreak havoc to life and property,” said Habibullah Qureshi, a local.

The village is located at a slope and a non-metallic road connects it with the Handwara town.

“We have a joint family of 18 members living under a single roof. Fearing collapse of our house, we were forced to vacate the during night and stay with relatives in Magam since Monday,” Muhammad Ayoub, a local said.

Some families who muster courage to stay in their homes during nights said it was a nightmarish experience for them to spend nights amid increasing fear of widening of cracks.

Following a representation by locals about soil erosion in the village, a team from Soil Conservation Department accompanied by Tehsildar Handwara Ghulam Ahmad Khan today visited the village.

“Officials of Soil Conservation Department collected the sample of soil and sent it for testing. There is no need to panic and necessary measures will be taken for the safety of inhabitants of the village,” Khan said.

Most of the families vacated their houses and moved to safer location in nearby localities during nights.

“Staying for nights here may prove disastrous because land is developing more cracks at different places. For past two days, we have been moving to other locations to spend nights and avoid any eventuality,” a local Muhammad Sarwar said.

Most of the houses in the village are multi-storied wooden structures and only a small number of houses have a concrete foundation.

Locals appealed the district administration to take necessary steps for their safety on the basis of the report on soil testing.

“The soil may have turned marshy after many years. If that is the case, then the entire village may be forced to migrate to other areas for rehabilitation,” said another local Abdul Rashid Lone. 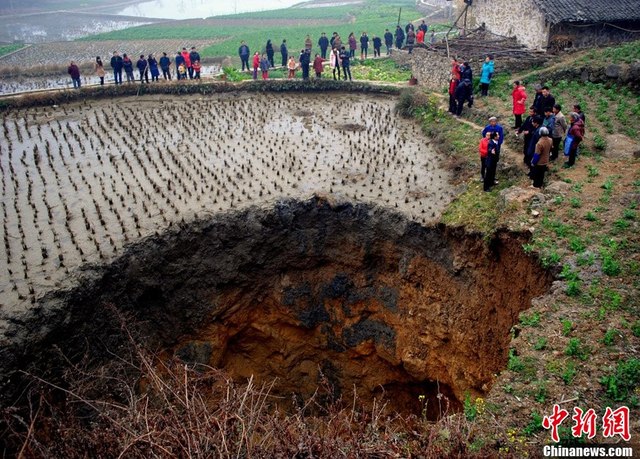 Frozen rice fields in Sichuan province were swallowed up by a massive sinkhole Tuesday, with farmland collapsing into a pit ten metre across in the province’s Weiyuan county.

The cave-in occurred around 7pm on February 5, with an explosive sound heard by villagers 100 meters away, which some compared to the sound of firecrackers.

No one was reported to have been killed or injured, according to China News Service, but villagers will have to deal with the gaping holes in the middle of their land, while authorities monitor the area for further geologic instability. 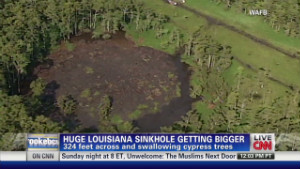 The state is taking a closer look at what residents say are bubbles in Lake Peigneur in Iberia Parish.

The departments of Natural Resources and Environmental Quality took samples from Lake Peignuer today to find out what is causing the bubbles.

Last night, public officials, residents and other groups spoke out against AGL Resources, which wants to expand natural gas storage below salt caverns under the lake. Residents fear it could be another disaster waiting to happen--like the current sinkhole in Assumption Parish.

Residents near Lake Peigneur are already on edge since a 1980 accident involving an oil drilling rig. A miscalculation sent the rig's drill directly into the salt mine instead of under the lake. The whirlpool that was created swamped several acres of land and was strong enough to swallow barges from a nearby canal.

"We have unknown bubbling, it's definite. There's no two ways about it," Nara Crowley, President of Save Lake Peignuer, Inc. said.

Crowley is worried that the bubbles indicate big problems, and she's against AGL's proposed expansion of an underground natural gas storage facility.

"They should deny this permit. We should have the environmental impact statement we've always asked for because that's all we've ever asked for, and stop this project," Crowley said.

"If we get a big sink hole what's going to happen? We don't know. The previous accident in 1980 took in 150 acres of land, What's this one going to do," concerned resident David Lecompte said.

DNR says that its investigation into the bubbles is not related to AGL's permit process. But what they find out could have an effect.

"We want to get to the bottom of it too, and discover if this is something that requires some action, or if it's something that ends up being harmless. It might be something that needs to be acted on," Patrick Courreges, Department of Natural Resources, Director of Communications said. 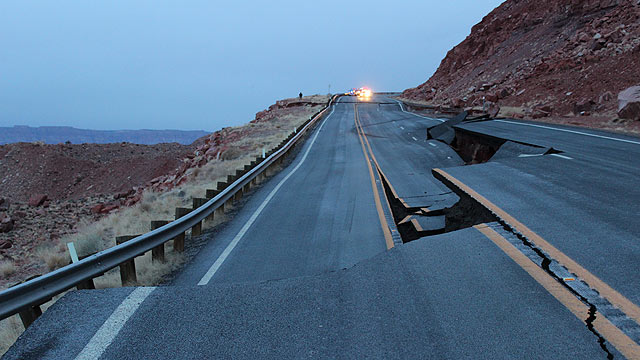 A 150-foot section of U.S. 89 south of Page that buckled and sunk four feet Wednesday might have been caused by a “geologic event,” according to the Arizona Department of Transportation.

The road collapsed at mile post 526 just 2.5 miles north of the intersection with U.S. 89A, about 25 miles south of page, according to an ADOT spokesman. He said the incident was not related to the weather.

The road was closed in both directions and there was no estimation when the highway would reopen, said an ADOT spokesman.

ADOT officials said northbound U.S. 89 was closed at the U.S. 89A junction, which takes motorists west toward Jacob Lake. In Page, U.S. 89 was closed at the junction with State Route 98. Northbound motorists were being routed to U.S. 160 east to State Route 98, and north on SR 98 back to U.S. 89 in Page. The detour is about 45 miles longer than the direct route, the spokesman said.

The Coconino College campus in Page was also closed because of the road closure. DPS reported a number of collisions within the collapse, but none appeared to be serious. No injuries were reported. No other information was immediately available.