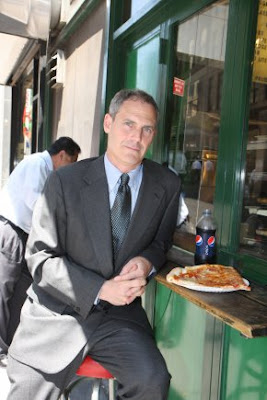 American journalist and author, Frederick Kaufman, whose new book is Bet the Farm: How Food Stopped Being Food.

One of the more gripping tales I've read in some time wasn't a potboiler thriller or the latest installment of a Swedish murder mystery, but food journalist Frederick Kaufman's attempt to find out what's behind the current and very real the food crisis. In his new book, Bet The Farm: How Food Stopped Being Food, the veteran writer and professor starts with a simple question: why can't delicious, inexpensive and healthy food be available to everyone on earth?

He starts his quest by looking at fast-food pizza, and how Domino's manages to make the same pies everywhere while keeping prices affordable. Soon, he's visiting mozzarella makers in Colorado, tomato farms in California, laboratories and CEO's offices. Kaufman becomes spellbound by the hunger problems facing the world, and this obsession propels him on what in turn is a spellbinding journey. It's sort of like Heart of Darkness, but with pepperoni.

The book is a must-read especially for anyone who has been hearing about how the commodities market has affected everything from hunger to GMO's to obesity. But I'd say the 259-pager is fascinating enough for everyone. It might even make the perfect holiday gift for a friend or family member — unless they happen to work for Monsanto. I caught up with Kaufman at downtown NYC lunch spot The Smile for sandwiches and details.

What was the green-light moment to get started on this book? I had been writing about American food culture for Harper's for many years, and one oevening I had drinks with my editor and we couldn’t think of anything more to say about food, and so we all of the sudden realized that it was no longer about the food, it was about not enough food. It was about hunger.

You say in the book that you use the old Watergate technique: you follow the money? I thought I had a really simple question: Why can’t there be healthy, delicious and inexpensive food for everybody on earth? Then I learned that people go hungry not because there isn’t enough food. We make more than twice the amount of food needed to feed everybody on this planet. The reason people go hungry is because they can’t afford the food. And so I switched my question to: How does food get its price?

In the process, you go into places where I’m sure you weren’t welcome like Tyson’s chicken and Domino's Pizza's mozzarella supplier? I think every investivagative journalist knows how hard it is to get into places where it’s not necessarily in their best interest for you to be. I simply called up Domino’s and I said I’d lke to understand the anatomy of a pepperoni pizza. And they let me in. And now they’re very angry about that.

But you don’t really pin it on Domino’s? I think I was really fair to Domino’s and to Tyson Foods. I think I gave an incredibly fair shake to the scientists involved in genetic alteration of food. I think I was very fair to the World Food Program. And I think I gave a fair shake to Wall Street, which is where I finally ended up. The funny thing is that the only people who really don’t complain are the bankers, because they know what the deal really is.

Did it ultimately end up making you feel depressed to come to these conclusions? What was your reaction? There is value in knowledge; there is joy in understanding how it works. And when I came to finally understand how it works there was opportunity to fix the problem. So one of the problems is compassion fatigue, depression— there are real ways to stop speculation in global food and to make food delicious, inexpensive and healthy for everybody on earth.

That’s the argument against GMO’s, and yet the corporations keep suggesting that if there’s no GMO’s, the world’s going to starve. Are they being disingenuous? You use the word "disingenuous." I would go further and I would say there is a profound depth of hypocrisy to what a company like Monsanto is up to and Bayer Agroscience and Syngenta. And the problem ultimately is one of their monopoly and intellectual property rights and proprietary technology. This is a topic that is very emotional and we can see that playing out in Proposition 37 in California right now [the measure was voted down on Tuesday]. I believe that there should be transparency but there’s something more, which is that we need to get the money out of the profit stream for Monsanto, and Cyngenta and Bayer Agroscience and Dow Agrochemical.

Have the executives at these companies been brainwashed into thinking that they're doing the right thing? People in the industry and often people in academia are mistaking environmental sustainability for economic sustainability. This is another form of the subtitle of the book. Many of the industry players no longer think of food as food. They think of food as a spreadsheet, a legal construct, a political football or some sort of a financial derivative — a financial instrument known as a derivative. And of course Wall Street has exploited the fact that food is no longer perceived as food, and stepped right in and made windfall profits on the ever-growing price of global commodities.

Let's talk about GMOs, which also play a role in the book. I spent a year traveling from one genetic modification laboratory to another. I saw hundreds of growouts with all sorts of different plants. I met a woman whose lifelong goal is to create a square tomato. I met a woman, Dr. Pamela Ronald, who has created a variety of rice that is resistant to the worst rice blight in Asia. These two things are not equal: if you create a square tomato that Unilever or Heinz likes [so it can] get more in a box, or if you’re creating something that could potentially have a tremendously positive effect on small farmers and on Asian rice production. So it’s kind of like saying, Science: Good or bad? And it’s dangerous to keep our thinking so narrow about such a big topic. Monsanto is a bad player, and we have to get them out of the business — Roundup Ready, the way its’ being spread and the way it's working out legally, this is bad, and we all know this. Is this a reason to stop funding throughout America, academic research in food? The scientists themselves perceive Monsanto as a bad player.

Are there any corporations that are trying to do better to help solve the problems? I cannot speak for Monsanto, but when I’m at Tyson Foods — which in its own way is infamous for being a bad player — I met people who really belived that they were helping not only to feed the world but to save the world. I think people believe this, and I guess now that corporations are people we can say that corporations feel this way too. (I’m clearly being sarcastic.) Bill Gates believes that bringing commodities markets to Uganda and Tanzania and Guatemala will be helpful. I do not believe he’s disingenuous. I simply believe he’s wrong.

What would you recommend as far as resources? What can people do to improve the situation? Even at the dinner table? The ultimate solution to the problem are agro-ecological farming methods and more localized food systems. But we’re not quite there yet because we’re not at a fair playing field because industrialized food and securitized food and financialized food have all the advantages that small farmers and small supply chains do not have. So how do we get to that fair playing field? Well, politics is messy. Maybe we don’t even love politics this much, but this is the path, and we should be happy that there is a path such as politics which isn’t always the case in other countries.

What about on the financial side? Your book ends up focusing on the markets... We can try to push for position limits so that banks are limited in the amount of speculative investments they can make in global food. We can push for US strategic grain reserve, which we had up until the late 1990s, which will help stabilize the price of food.

What about the home cook who doesn’t want to spend time on politics? Can shopping at farmer's markets really do anything? Farmers markets and good real food are essential elements of the solution. They must be encouraged and we need to grow it. However, I don’t believe that this problem can be solved simply by consumer choice. That’s’ what I came to see in this book. That’s the ultimate solution, but to make it ultimate there have to be financial reforms.

Posted by seemorerocks at 21:00