Winter storm in Kansas and Missouri 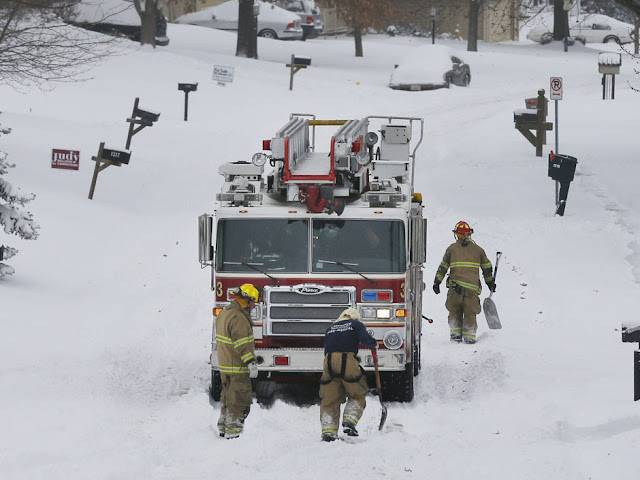 ST. LOUIS — Blinding snow, at times accompanied by thunder and lightning, bombarded much of the United States’ midsection Thursday, causing whiteout conditions, shutting down large swaths of interstate highways and forcing schools, businesses and even state legislatures to close.

Kansas was the epicentre of the winter storm, with parts of the state buried under 35 centimetres of powdery snow, but winter storm warnings stretched from eastern Colorado through Illinois. Freezing rain and sleet were forecast for southern Missouri, southern Illinois and Arkansas. St. Louis received all of the above — a treacherous mix of snow, sleet and freezing rain.
Several accidents were blamed on icy and slushy roadways, including two fatal accidents. Most schools in Kansas and Missouri, and many in neighbouring states, were closed. Legislatures shut down in Kansas, Missouri, Arkansas, Nebraska and Iowa.hters battle a blaze after a car burst into flames trying to make
“Thundersnow” rumbled through Kansas and Missouri earlier Thursday. National Weather Service meteorologist Scott Truett said that’s the result of an unstable air mass, much like a thunderstorm.
“Instead of pouring rain, it’s pouring snow,” Truett said. And pouring was a sound description, with snow falling at a rate of 5 cm per hour or more in some spots.
Topeka got 7.5 cm of snow in one 30-minute period, leaving medical centre worker Jennifer Carlock to dread the drive home.
“It came on fast,” Carlock said as she shovelled around her car. “We’re going to test out traction control on the way home.”
Snow totals passed the foot mark in many places: Monarch Pass, Colo., had 44 cm, Hutchinson, Kan., 35 cm and Wichita, Kan., 33 cm. A few places in far northern Oklahoma saw between 25-35 cm of snow. The National Weather Service said up to 45 cm of snow were possible in central Kansas.
With that in mind, Kansas transportation officials — and even the governor — urged people to simply stay home.
Drivers were particularly warned away from the Kansas Turnpike, which had whiteout conditions. Interstate 70 was also snow-packed and a 150-kilometre stretch of that road was closed between Salina and Hays
A Topeka City snow plow operator pushes a car out of an intersection Thur
“If you don’t have to get out, just really, please, don’t do it,” Kansas Gov. Sam Brownback said.
Travelers filled hotels rather than skating across dangerous roadways. At the Econo Lodge in WaKeeney, Kan., assistant manager Michael Tidball said the 48-room hotel was full.
But there were a few that came down with cabin fever, like Jennifer McCoy of Wichita. She loaded her nine children – ages 6 months to 16 years – in a van for lunch at Applebee’s.
“I was going crazy, they were so whiny,” McCoy said. They planned to build an igloo after lunch.The scene in St. Louis Thursday.
Just south of Wichita near the small community of Clearwater, Scott Van Allen had already shoveled the sidewalks and was on his tractor clearing the driveway of the 25 cm of snow. For once, he didn’t mind the task.
“I kind of enjoyed it this time,” he said. “We were certainly needing the moisture terribly.”
The storm brought some relief to a region of the country that has been parched for nearly a year, engulfed in the worst drought in decades. Climatologists say 30 cm of snow is equivalent to about 1 inch of rain, depending on the density of the snow.
Vance Ehmke, a wheat farmer near Healy, Kan., said the nearly foot of snow was “what we have been praying for.”

“The big question is, `Is the drought broke?’ ” Ehmke asked.

Near Edwardsville, Ill., farmer Mike Campbell called the snow – or any precipitation – a blessing after a bone-dry growing season in 2012. He hopes it is a good omen for the spring.
“The corn was just a disaster,” Campbell said of 2012.
This isn’t our usual Thursday noon routine

In Colorado, the U.S. Forest Service planned to take advantage of the snow to burn piles of dead trees on federal land.
Near the Nebraska-Kansas border, as much as 20 cm fell overnight, while western Nebraska saw about half of that amount, National Weather Service forecaster Shawn Jacobs said. Areas in western Oklahoma and the Texas Panhandle also had up to 20 cm of snow.
Elsewhere, Arkansas saw a mix of precipitation – a combination of hail, sleet and freezing rain in some place, 15 cm of snow in others. Forecasters warned northern Arkansas could get a half-inch of ice.
Two fatal accidents were attributed to winter weather on Wednesday. In Oklahoma, 18-year-old Cody Alexander of Alex died when his pickup truck skidded into oncoming traffic and hit a truck. And in Nebraska, 19-year-old Kristina Leigh Anne Allen of Callaway died when a SUV lost control, crossed the median and struck her car.
Missouri Gov. Jay Nixon declared a state of emergency Thursday morning. Kansas City International Airport shut down by midmorning; more than 320 flights were canceled at Lambert Airport in St. Louis.
The University of Missouri canceled classes for one of the few times in its 174-year history. At a nearby Wal-Mart, some students passed the ice scrapers and snow melt, heading directly to the aisles containing sleds and alcohol.
“This isn’t our usual Thursday noon routine,” Lauren Ottenger, a senior economics major from Denver, said as she stockpiled supplies.
Alex Sosnowski, a meteorologist for Accuweather, said the storm will push off into the Great Lakes and central Appalachians, and freezing rain could make it as far east and south as North Carolina. He also said a “spin-off” storm was expected to create heavy snow in New England on Saturday, and could push Boston to a February record.
Accuweather said that by the time the storm dies out, at least 24 states will be affected.