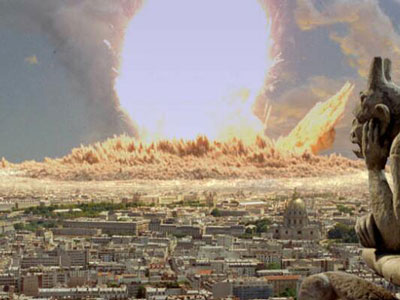 I know of no poll results, but I’ve asked the question a few times. Some people want to know everything. Others don’t want to know anything.

In fact, it’s inconceivable to me that people don’t want to know. I want to stare, unblinking, when the asteroid strikes. I want to peer into the abyss of my mortality, eyes wide open, knowing the exact moment I will depart this mortal coil. Not in the name of courage, but curiosity.

I have an idea. I could use the scenario and attendant hypothetical questions to introduce future presentations. (As an aside, the potential for speaking tours comes up quite frequently for me. Then, as prospective hosts fully understand the messages I’ll be transmitting, they fade away, often with no explanation and no response to my repeated messages. If you’re interested in jumping over the incredibly low bar necessary to host me, click this link for information.) Back to the point: If I used the hypothetical questions in my introduction, it would allow participants an opportunity to leave the premises before they hear the worst of it.

They’d be out a few minutes of time, but they’d save some time and they’d depart relatively free of angst. Ignorance is bliss, especially with respect to challenging social issues, and who am I to rob people of their bliss?

Like the ninth person to arrive at a party for eight, I missed “fitting in” only by a smidgen. If I’m angry because I’m late to the party, you get to bear the brunt of my anger by reading about it here. My only defense is the line that’s become a bumper-sticker cliche: If you’re not outraged, you’re not paying attention.
For me, not knowing is unbearable. But knowing is a great burden, too. And while I’m expecting an asteroid oddly shaped like climate chaos, we’ll probably get hit by a meteor.

If I did not know about the horrors of empire, I would still be teaching at a university. I would still be drawing a large paycheck doing the work I love and interacting with idealistic young people. I would have the respect and admiration of civilized people, including the members of my immediate family.

If I did not know about the horrors of climate change, I would be content with my path in life. I would be living large, sleeping well, and enjoying the contentment of a life well lived. Rarely would I attract animus from across the sociopolitical spectrum. Angst would lie in abeyance, along with threats on my life.
What a boring existence that would be. For better and worse, I’m stuck with the current adventure: the adventure of a lifetime until the adventure ends, along with the life.

There are no second chances, no opportunities to undo what’s been done. At the level of individuals, we refer to poor choices as stupidity (when others are making the choices) or tragedy (when it’s us). At the level of our ill-fated species, we refer to the myriad poor choices as progress. As nearly as I can distinguish, when faced with the proverbial fork in the road, we’ve taken the wrong turn at each and every opportunity. There are no second chances for our species, no opportunities to undo what’s been done. And yet we keep plugging along, claiming we’re sapient progressives. A few among us claim to be conservatives, but we’re conserving only this omnicidal way of life. Until we can’t.

We’ve committed suicide at the level of our entire species, and too many other species to correctly tally. All that’s left is more excuses in an endless string of excuses from the architects and marketers of industrial civilization. I won’t hold my breath for their long-overdue apologies.


I’m not suggesting all the bliss ignorance is inexplicable. The corporate governments of the world have been following the playbook of William Casey, U.S. Director of the Central Intelligence Agency, since long before he uttered these words in 1981: “We’ll know our disinformation program is complete when everything the American public believes is false.” It’s working great, as indicated by the one-third of Americans who would accept cavity searches in exchange for the privilege of flying commercial airlines, among many other such anecdotes.

An empire in decline requires obedience at home, and it helps if the populace remains purposefully ignorant. At a weekly White House meeting dubbed “Terror Tuesdays,” the drone-bomber-in-chief decides who will die without a whiff of due process, transparency, or oversight (and he has plenty of video-game operators forgoing their consciences to pull the trigger). In the video clip embedded in this article, Democratic National Committee chair Debbie Wasserman Schultz claims she has never heard of Obama’s infamous “kill list,” thus branding herself a national-level politician liar or stunningly ignorant (if she’s lying, she has plenty of company in the Obama administration).

Obama has given himself power over all communication systems in the country, and he can wiretap, indefinitely detain, and kill any of us on a whim, thereby indicating how meaningless is the Bill of Rights. In addition, he’s constantly seeking more power (including pre-emptive prosecution, in case he believes you’re thinking about committing a crime). Obama’s brand of evil, which includes dictatorial assassinations and ongoing destruction of the Constitution and the Bill of Rights, is exceeded only by the audacity and willful ignorance of his supporters.

My monthly essay for Transition Voice is scheduled to appear tomorrow. Look for it here.