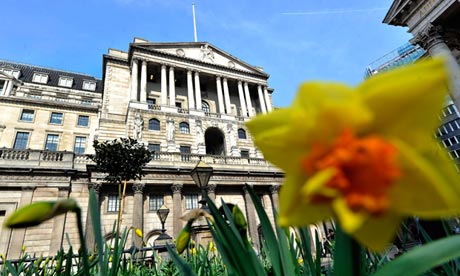 People across Britain could see their savings hit or face new charges on their current accounts after a senior official at the Bank of England proposed the “extraordinary” measure of imposing negative interest rates on banks.

Deputy Governor Paul Tucker said the idea of charging high street banks to store money centrally, rather than paying them interest, should be explored as a way of easing the flow of credit to the stagnant economy.

“I hope we will think about whether there are constraints to setting negative interest rates,” he told MPs on the Treasury Select Committee. Although such a move has been discussed by the Bank of England in the past, Mr Tucker’s comments are the strongest indication yet that it is under serious consideration.

It is hoped that the prospect of negative interest rates would encourage banks to lend more - but analysts warned that it would dent banks’ profitability and that the sector would probably respond by cutting interest rates on savings accounts, or even introducing current account charges.

“It’s very clear this would be expected to bring downward pressure on the rates savers can expect, pushing them down towards zero,” said Malcolm Barr of JP Morgan.

It is thought that the banks would seek to make a profit by lending the funds out to companies and households. The Swedish central bank imposed negative interest rates in 2009 with this goal in mind.

But any move that further eroded the returns of savers, even indirectly, would face a backlash. Savings rates paid by high street banks have fallen to record lows since the Bank slashed its main policy rate to 0.5 per cent in March 2009 to support the freefalling economy. The average rate on an easy access savings account today stands at around 2 per cent - less than the annual inflation rate of 2.7 per cent.

Savers have also complained of being squeezed indirectly by the Bank’s Funding for Lending Scheme, which has provided high street banks with new sources of cheap funding, removing the pressure on them to compete for deposits by offering attractive rates.

Another concern is that the Bank’s £375bn Quantitative Easing scheme has pushed down the value of annuities - although the Bank has pointed out that the money printing programme has also bolstered the value of pension pots by boosting share prices, leaving people, ultimately, no worse off.

Despite floating the idea of negative interest rates, Mr Tucker was careful to stress that no decision had been made. “It would be an extraordinary thing to do and it needs to be thought through carefully,” he said. Mr Tucker, who was an unsuccessful candidate to succeed Sir Mervyn King as the next Governor in July, added: “[It’s] not something anyone should clutch on to as the answer to the universe.”

Mr Tucker’s idea was described as a “panic measure” by Ros Altmann, an expert on pensions. “Interest rates are already negative for savers,” she said. “It’s hard to see why this would make a hoot of difference to lending when rates at 0.5 per cent haven’t.”

Andrew Sentence, a former member of the Monetary Policy Committee, said the Bank was still looking for monetary policy to deliver things that it was simply unable to achieve. “When you look at these options – just as we’re discovering with the Funding for Lending Scheme – you run into other problems, particularly for savers.”.

Samuel Tombs of Capital Economics said there were better ways for the Bank to boost lending, such as enhancing the generosity of the Funding for Lending Scheme.

However, not all financial analysts were dismissive of Mr Tucker’s idea. “Negative interest rates will increase the pressure to lend and the mortgage market would be a major beneficiary of any such action,” said Ray Boulger of independent mortgage advisers John Charcol.

Last year the International Monetary Policy Committee proposed the Bank should look at taking its main policy rate below 0.5 per cent in order to boost the economy. But monetary policymakers rejected this idea, arguing that it would damage the profitability of building societies.