President Barack Obama says the United States could launch an attack on Iran as early as this June, Israeli media reports.

According to a report on Israel’s Channel 10 News that has since been picked up by the Times of Israel, Pres. Obama will use an upcoming meeting overseas to discuss a military strike on Iran. Pres. Obama is scheduled to visit Israeli Prime Minister Benjamin Netanyahu next month, and during the get-together the two leaders will reportedly work out the details for a possible assault.

Pres. Obama will tell Netanyahu that a “window of opportunity” for a military strike on Iran will open in June, Channel 10 claims.

Israel has long-urged the White House to use its military prowess to intervene in Iran’s rumored nuclear weapon procurement plan, demands which have by-and-large been rejected by the Obama administration. According to the latest reports, though, the United States might finally be willing to use its might to make a stand against Iran’s race for a nuke.

“I have conversations with Prime Minister Netanyahu all the time. And I understand and share Prime Minister Netanyahu’s insistence that Iran should not obtain a nuclear weapon, because it would threaten us, it would threaten Israel, and it would threaten the world and kick off a nuclear arms race,” Pres. Obama said during an interview on the television program 60 Minutes last year, but not before adding that he’ll continue to block “noise” from Netanyahu’s camp. "Now I feel an obligation, not pressure but obligation, to make sure that we’re in close consultation with the Israelis — on these issues. Because it affects them deeply. They’re one of our closest allies in the region. And we’ve got an Iranian regime that has said horrible things that directly threaten Israel’s existence,” he said.

But five months after those remarks, Iran is still inclined to become a nuclear power. Only days earlier, The Jerusalem Post reported that Netanyahu said the details of a confidential report by the International Atomic Energy Agency suggested that that Iran had begun installing advanced centrifuges at its main uranium enrichment facility, sparking “very grave” concerns that Israel could be hit with a nuke.

Right now, five members of the United Nations Security Council and Germany are holding talks with Iranian officials in Kazakhstan, with the goal of reaching a diplomatic answer to the nuclear crisis. However, domestic tensions within Iranian political elite do not make the prospect of a solution any more viable for now. Iranian President Mahmoud Ahmadinejad’s second and final term in office is set to wrap up this June, and political fights within the country’s top contenders for the position has prompted possible presidents to take harsh stance on the issue and resist outside pressure.

"President Ahmadinejad’s second term in office expires in half a year. The law prohibits him from running for the third term. What is happening could be an intensifying power struggle,” Andrei Baklitsky of the Russian Center for Policy Studies tells the Moscow Times of the latest “5+1 talks” in Kazakhstan. “At first [Iranian Foreign Minister Ali Akbar] Salehi signals the possibility of direct talks with the United States and then the supreme leader rejects it. But as Salehi is Ahmadinejad’s man, the controversy should be viewed through the prism of an internal political standoff rather than as Tehran’s official policy."

John Kerry, the US secretary of state, told reporters in Berlin, "My hope is Iran will make its choice to move down the path to a diplomatic solution."

When Netanyahu critiqued the United States’ reluctance to act first last year, a meeting between the prime minister and Pres. Obama was subsequently cancelled by the White House. Just next month, though, the commander-in-chief will travel to the West Bank and Jordan for the first time during his second term in office. National Security Council spokesman Tommy Vietor has said of the trip that it will mark an “opportunity to reaffirm the deep and enduring bonds between the United States and Israel and to discuss the way forward on a broad range of issues of mutual concern, including Iran and Syria.” 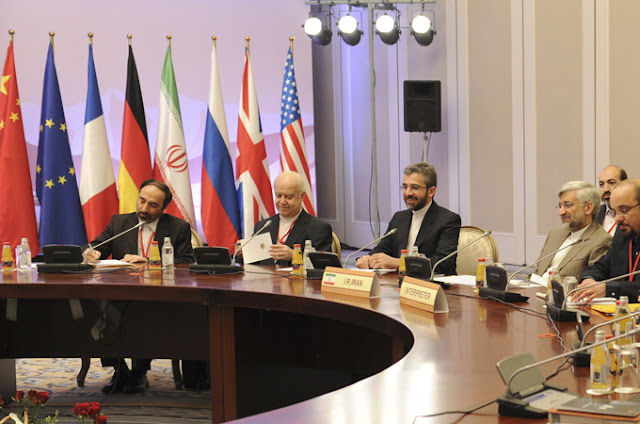 Iranian negotiators have hinted that they are prepared to make a new offer to world powers in talks over its nuclear programme, after the United States proposed limited steps to ease crippling economic sanctions against Iran.

A Western official described the first day of meetings in Almaty, Kazakhstan as "useful," and said discussions will continue on Wednesday. This is the first round of negotiations in eight months between Iran and the so-called "P5+1" powers, meaning the members of the UN Security Council plus Germany.

"We have prepared our own offer with several different versions," an Iranian source told the AFP news agency. "Which version we present depends on what the 5+1 put forward."

The offer could include halting the enrichment of uranium to 20 percent, the source said, in exchange for a full lifting of international sanctions.

Western negotiators are unlikely to go that far, but they have proposed easing sanctions on gold and other precious metals if Tehran closes its underground Fordow enrichment plant.

After months of deadlock, and with Iran's political elite preoccupied with presidential elections scheduled for June, few believe the meeting will yield a quick breakthrough.

"It is clear that nobody expects to come from Almaty with a fully done deal," a spokesman for the European Union's foreign policy chief Catherine Ashton, who oversees contacts with Iran on behalf of world powers, said shortly after talks started.

At best, diplomats and analysts say, Iran will take the joint offer seriously and agree to hold further talks soon on practical steps to ease the tension.

"We are looking for flexibility from the Iranians," said Ashton's spokesman, Michael Mann.

But Iran, whose chief negotiator Saeed Jalili is close to Ali Khamenei, Iran's supreme leader, has shown no sign of willingness to scale back its nuclear work.

It argues that has a sovereign right to carry out nuclear enrichment for peaceful energy purposes, and in particular refuses to close Fordow, a condition the powers have set for any sanctions relief.

The facility is used for enriching uranium to 20 percent, which places it a short technical step from weapons-grade.

Iran's stockpile of higher-grade uranium has grown to about 167kg, an increase of roughly 18kg since mid-November. While the pile is still approaching the level of 240 kg that Israel has set as its "red line", the growth rate has slowed sharply.

A UN nuclear watchdog report last week said Iran was for the first time installing advanced centrifuges that would allow it to significantly speed up its enrichment of uranium, which can have both civilian and military purposes.

Tightening Western sanctions on Iran over the last 14 months are hurting Iran's economy, slashing oil revenue and driving the currency down, which in turn has pushed up inflation.

The central bank governor was quoted on Monday as saying Iran's inflation was likely to top 30 percent in coming weeks as the sanctions contribute to shortages and stockpiling.

But analysts say they are not close to having the crippling effect envisaged by Washington and - so far at least - they have not prompted a change in Iran's nuclear course.

Israel, which for decades has had its own undeclared nuclear weapons programme, has threatened to attack Iran's nuclear facilities if negotiations fail.